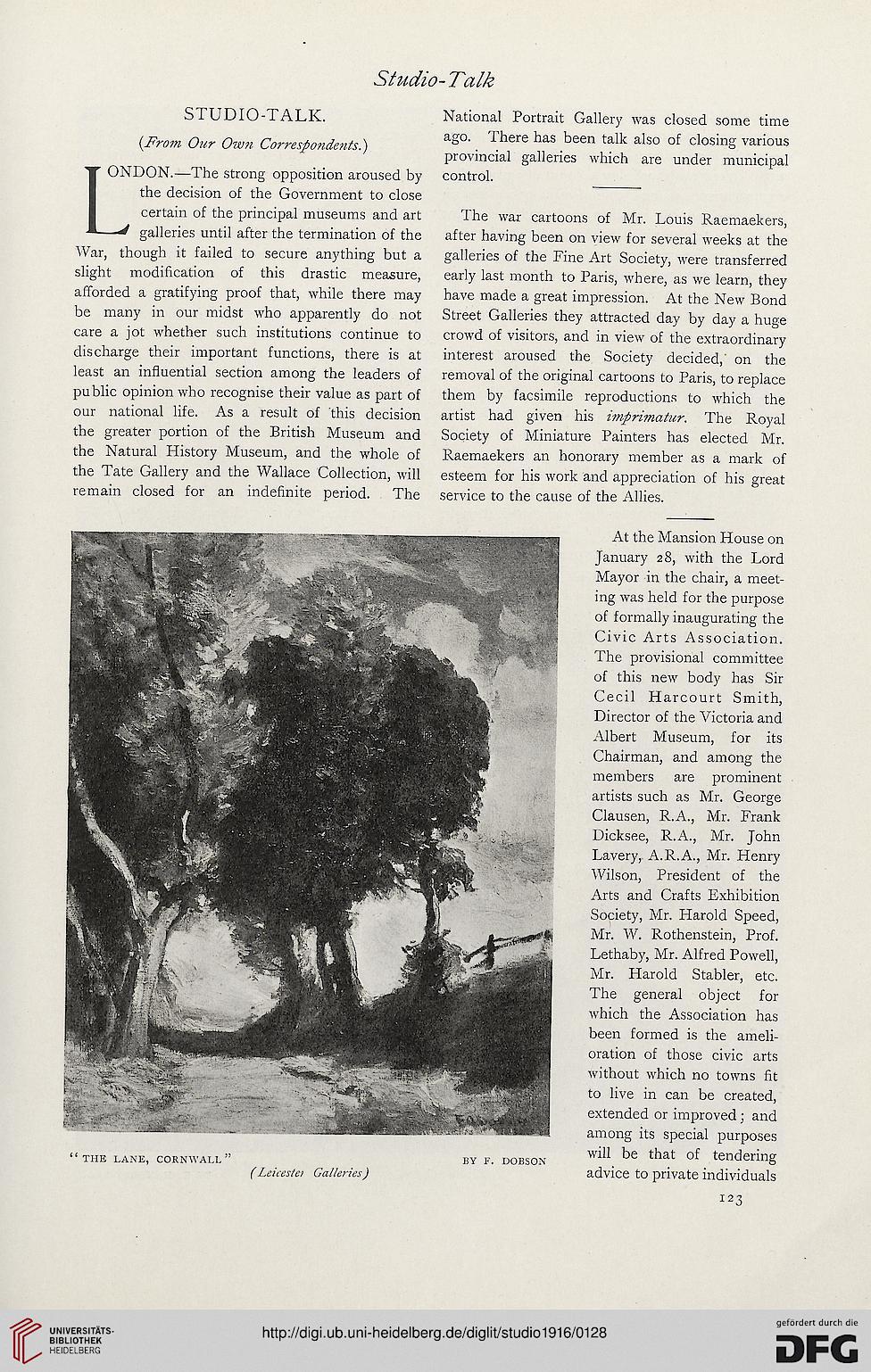 LONDON.—The strong opposition aroused by
the decision of the Government to close
certain of the principal museums and art
—4 galleries until after the termination of the
War, though it failed to secure anything but a
slight modification of this drastic measure,
afforded a gratifying proof that, while there may
be many in our midst who apparently do not
care a jot whether such institutions continue to
discharge their important functions, there is at
least an influential section among the leaders of
public opinion who recognise their value as part of
our national life. As a result of this decision
the greater portion of the British Museum and
the Natural History Museum, and the whole of
the Tate Gallery and the Wallace Collection, will
remain closed for an indefinite period. The

National Portrait Gallery was closed some time
ago. There has been talk also of closing various
provincial galleries which are under municipal
control.

The war cartoons of Mr. Louis Raemaekers,
after having been on view for several weeks at the
galleries of the Fine Art Society, were transferred
early last month to Paris, where, as we learn, they
have made a great impression. At the New Bond
Street Galleries they attracted day by day a huge
crowd of visitors, and in view of the extraordinary
interest aroused the Society decided, on the
removal of the original cartoons to Paris, to replace
them by facsimile reproductions to which the
artist had given his imprimatur. The Royal
Society of Miniature Painters has elected Mr.
Raemaekers an honorary member as a mark of
esteem for his work and appreciation of his great
service to the cause of the Allies.

“THE LANE, CORNWALL” BY F. DOBSON

At the Mansion House on
January 28, with the Lord
Mayor in the chair, a meet-
ing was held for the purpose
of formally inaugurating the
Civic Arts Association.
The provisional committee
of this new body has Sir
Cecil Harcourt Smith,
Director of the Victoria and
Albert Museum, for its
Chairman, and among the
members are prominent
artists such as Mr. George
Clausen, R.A., Mr. Frank
Dicksee, R.A., Mr. John
Lavery, A.R.A., Mr. Henry
Wilson, President of the
Arts and Crafts Exhibition
Society, Mr. Harold Speed,
Mr. W. Rothenstein, Prof.
Lethaby, Mr. Alfred Powell,
Mr. Harold Stabler, etc.
The general object for
which the Association has
been formed is the ameli-
oration of those civic arts
without which no towns fit
to live in can be created,
extended or improved; and
among its special purposes
will be that of tendering
advice to private individuals