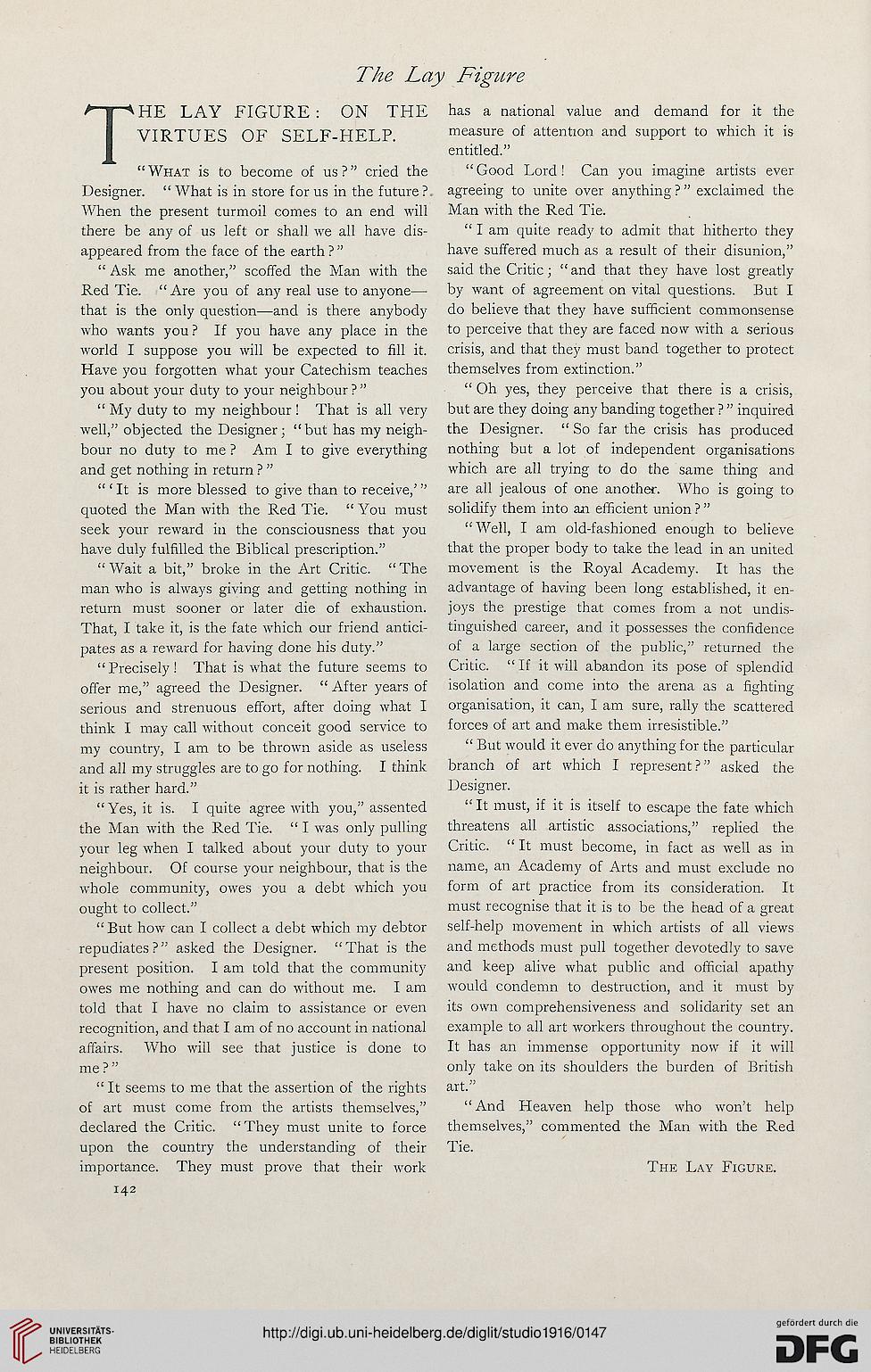 “What is to become of us?” cried the
Designer. “ What is in store for us in the future ?.
When the present turmoil comes to an end will
there be any of us left or shall we all have dis-
appeared from the face of the earth ? ”

“ Ask me another,” scoffed the Man with the
Red Tie. “ Are you of any real use to anyone—
that is the only question—and is there anybody
who wants you ? If you have any place in the
world I suppose you will be expected to fill it.
Have you forgotten what your Catechism teaches
you about your duty to your neighbour ? ”

“ My duty to my neighbour ! That is all very
well,” objected the Designer; “but has my neigh-
bour no duty to me ? Am I to give everything
and get nothing in return ? ”

“ ‘ It is more blessed to give than to receive,’ ”
quoted the Man with the Red Tie. “ You must
seek your reward in the consciousness that you
have duly fulfilled the Biblical prescription.”

“Wait a bit,” broke in the Art Critic. “The
man who is always giving and getting nothing in
return must sooner or later die of exhaustion.
That, I take it, is the fate which our friend antici-
pates as a reward for having done his duty.”

“Precisely! That is what the future seems to
offer me,” agreed the Designer. “After years of
serious and strenuous effort, after doing what I
think I may call without conceit good service to
my country, I am to be thrown aside as useless
and all my struggles are to go for nothing. I think
it is rather hard.”

“Yes, it is. I quite agree with you,” assented
the Man with the Red Tie. “ I was only pulling
your leg when I talked about your duty to your
neighbour. Of course your neighbour, that is the
whole community, owes you a debt which you
ought to collect.”

“ But how can I collect a debt which my debtor
repudiates?” asked the Designer. “That is the
present position. I am told that the community
owes me nothing and can do without me. I am
told that I have no claim to assistance or even
recognition, and that I am of no account in national
affairs. Who will see that justice is done to
me ? ”

“ It seems to me that the assertion of the rights
of art must come from the artists themselves,”
declared the Critic. “ They must unite to force
upon the country the understanding of their
importance. They must prove that their work

has a national value and demand for it the
measure of attention and support to which it is
entitled.”

“ Good Lord ! Can you imagine artists ever
agreeing to unite over anything?” exclaimed the
Man with the Red Tie.

“ I am quite ready to admit that hitherto they
have suffered much as a result of their disunion,”
said the Critic; “and that they have lost greatly
by want of agreement on vital questions. But I
do believe that they have sufficient commonsense
to perceive that they are faced now with a serious
crisis, and that they must band together to protect
themselves from extinction.”

“ Oh yes, they perceive that there is a crisis,
but are they doing any banding together ? ” inquired
the Designer. “ So far the crisis has produced
nothing but a lot of independent organisations
which are all trying to do the same thing and
are all jealous of one another. Who is going to
solidify them into an efficient union ? ”

“Well, I am old-fashioned enough to believe
that the proper body to take the lead in an united
movement is the Royal Academy. It has the
advantage of having been long established, it en-
joys the prestige that comes from a not undis-
tinguished career, and it possesses the confidence
of a large section of the public,” returned the
Critic. “If it will abandon its pose of splendid
isolation and come into the arena as a fighting
organisation, it can, I am sure, rally the scattered
forces of art and make them irresistible.”

“ But would it ever do anything for the particular
branch of art which I represent?” asked the
Designer.

“ It must, if it is itself to escape the fate which
threatens all artistic associations,” replied the
Critic. “ It must become, in fact as well as in
name, an Academy of Arts and must exclude no
form of art practice from its consideration. It
must recognise that it is to be the head of a great
self-help movement in which artists of all views
and methods must pull together devotedly to save
and keep alive what public and official apathy
would condemn to destruction, and it must by
its own comprehensiveness and solidarity set an
example to all art workers throughout the country.
It has an immense opportunity now if it will
only take on its shoulders the burden of British
art.”

“ And Heaven help those who won’t help
themselves,” commented the Man with the Red
Tie.