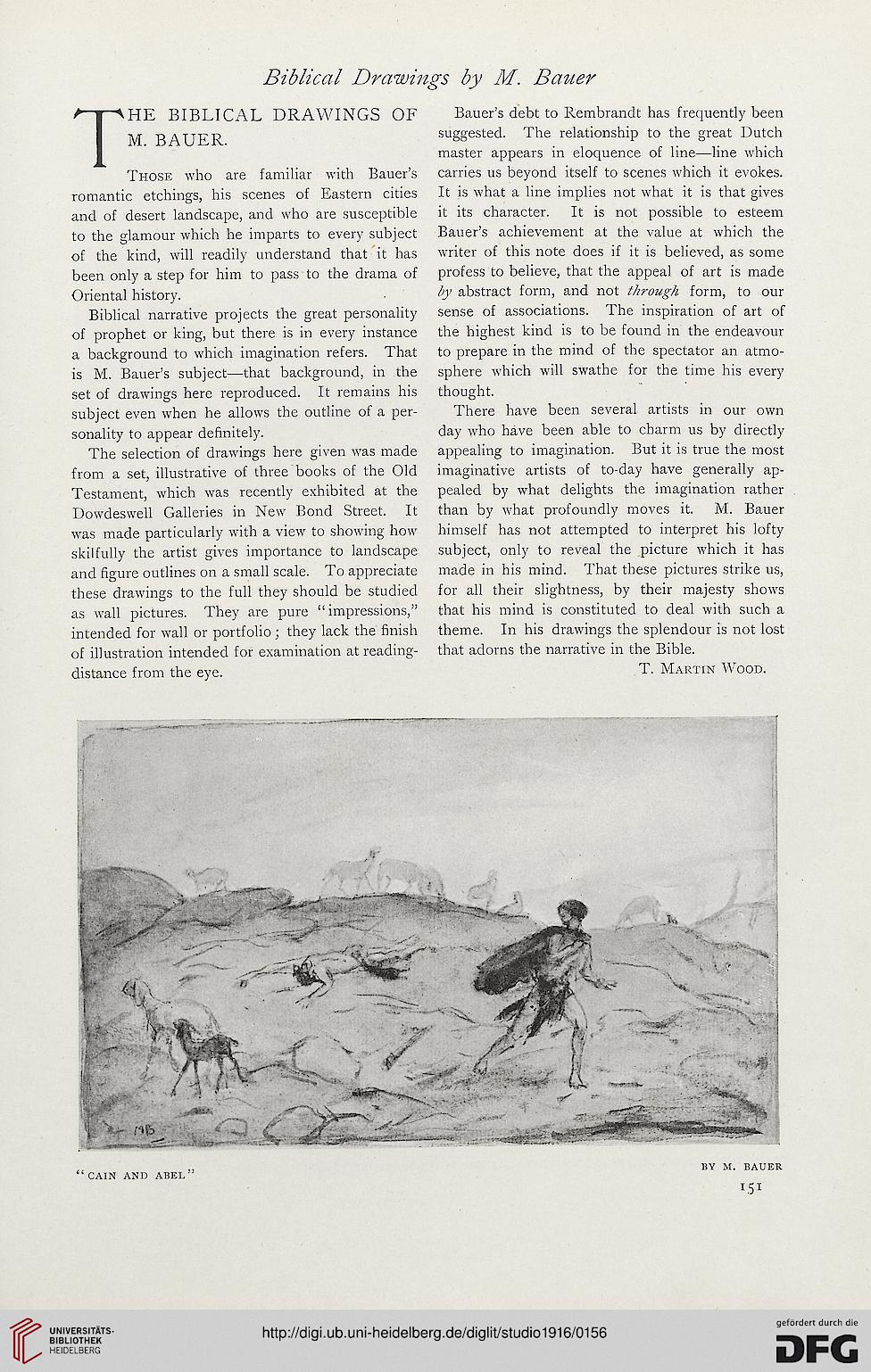 The biblical drawings of

Those who are familiar with Bauer’s
romantic etchings, his scenes of Eastern cities
and of desert landscape, and who are susceptible
to the glamour which he imparts to every subject
of the kind, will readily understand that it has
been only a step for him to pass to the drama of
Oriental history.

Biblical narrative projects the great personality
of prophet or king, but there is in every instance
a background to which imagination refers. That
is M. Bauer’s subject—that background, in the
set of drawings here reproduced. It remains his
subject even when he allows the outline of a per-
sonality to appear definitely.

The selection of drawings here given was made
from a set, illustrative of three books of the Old
Testament, which was recently exhibited at the
Dowdeswell Galleries in New Bond Street. It
was made particularly with a view to showing how
skilfully the artist gives importance to landscape
and figure outlines on a small scale. To appreciate
these drawings to the full they should be studied
as wall pictures. They are pure “impressions,”
intended for wall or portfolio; they lack the finish
of illustration intended for examination at reading-
distance from the eye.

Bauer’s debt to Rembrandt has frequently been
suggested. The relationship to the great Dutch
master appears in eloquence of line—line which
carries us beyond itself to scenes which it evokes.
It is what a line implies not what it is that gives
it its character. It is not possible to esteem
Bauer’s achievement at the value at which the
writer of this note does if it is believed, as some
profess to believe, that the appeal of art is made
by abstract form, and not through form, to our
sense of associations. The inspiration of art of
the highest kind is to be found in the endeavour
to prepare in the mind of the spectator an atmo-
sphere which will swathe for the time his every
thought.

There have been several artists in our own
day who have been able to charm us by directly
appealing to imagination. But it is true the most
imaginative artists of to-day have generally ap-
pealed by what delights the imagination rather
than by what profoundly moves it. M. Bauer
himself has not attempted to interpret his lofty
subject, only to reveal the picture which it has
made in his mind. That these pictures strike us,
for all their slightness, by their majesty shows
that his mind is constituted to deal with such a
theme. In his drawings the splendour is not lost
that adorns the narrative in the Bible.