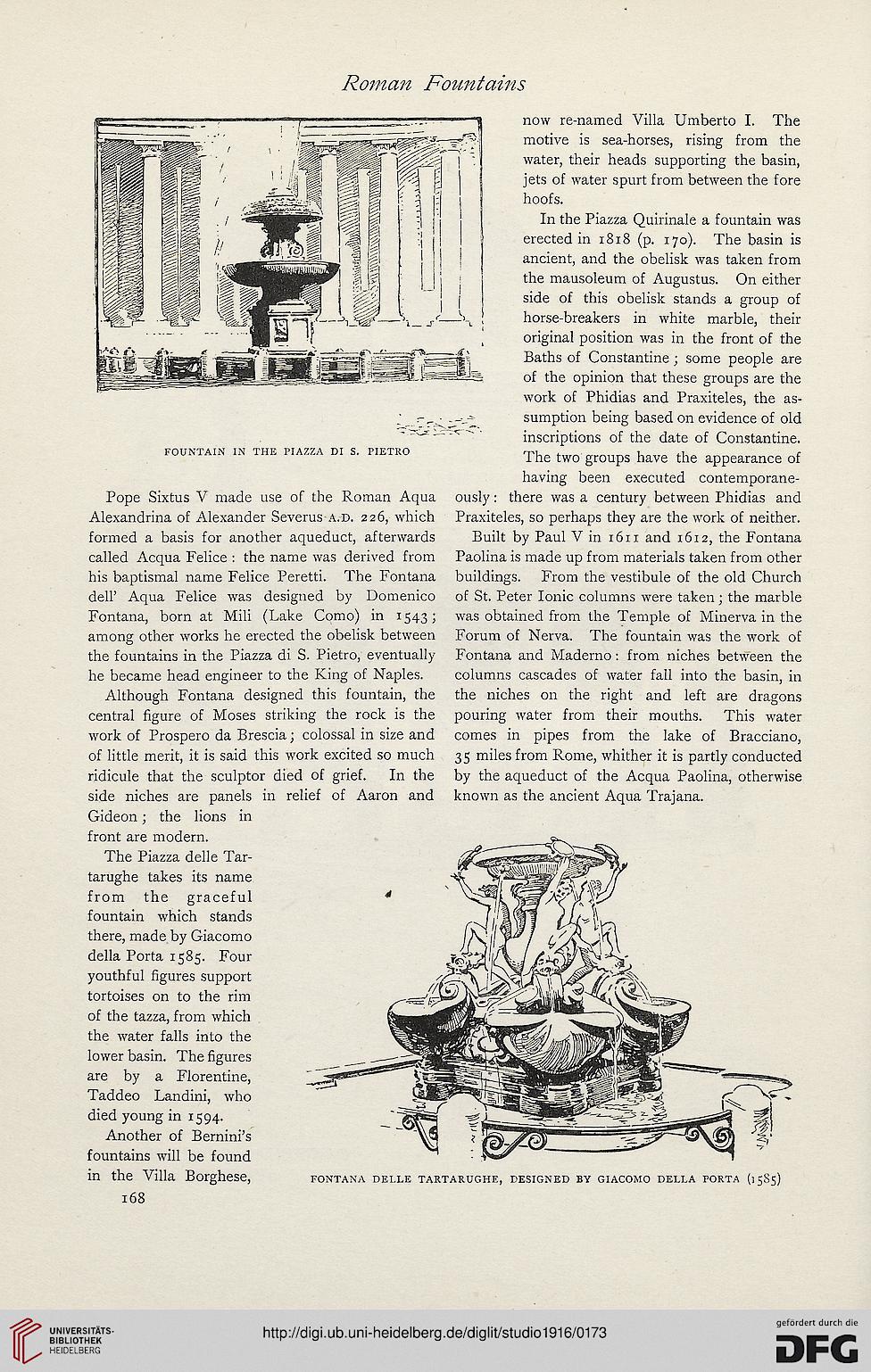 Pope Sixtus V made use of the Roman Aqua
Alexandrina of Alexander Severus a.d. 226, which
formed a basis for another aqueduct, afterwards
called Acqua Felice : the name was derived from
his baptismal name Felice Peretti. The Fontana
dell’ Aqua Felice was designed by Domenico
Fontana, born at Mili (Lake Como) in 1543;
among other works he erected the obelisk between
the fountains in the Piazza di S. Pietro, eventually
he became head engineer to the King of Naples.

Although Fontana designed this fountain, the
central figure of Moses striking the rock is the
work of Prospero da Brescia; colossal in size and
of little merit, it is said this work excited so much
ridicule that the sculptor died of grief. In the
side niches are panels in relief of Aaron and
Gideon; the lions in
front are modern.

The Piazza delle Tar-
tarughe takes its name
from the graceful
fountain which stands
there, made by Giacomo
della Porta 1585. Four
youthful figures support
tortoises on to the rim
of the tazza, from which
the water falls into the
lower basin. The figures
are by a Florentine,

Another of Bernini’s
fountains will be found
in the Villa Borghese,

now re-named Villa Umberto I. The
motive is sea-horses, rising from the
water, their heads supporting the basin,
jets of water spurt from between the fore
hoofs.

In the Piazza Quirinale a fountain was
erected in 1818 (p. 170). The basin is
ancient, and the obelisk was taken from
the mausoleum of Augustus. On either
side of this obelisk stands a group of
horse-breakers in white marble, their
original position was in the front of the
Baths of Constantine; some people are
of the opinion that these groups are the
work of Phidias and Praxiteles, the as-
sumption being based on evidence of old
inscriptions of the date of Constantine.
The two groups have the appearance of
having been executed contemporane-
ously : there was a century between Phidias and
Praxiteles, so perhaps they are the work of neither.

Built by Paul V in 1611 and 1612, the Fontana
Paolina is made up from materials taken from other
buildings. From the vestibule of the old Church
of St. Peter Ionic columns were taken; the marble
was obtained from the Temple of Minerva in the
Forum of Nerva. The fountain was the work of
Fontana and Maderno: from niches between the
columns cascades of water fall into the basin, in
the niches on the right and left are dragons
pouring water from their mouths. This water
comes in pipes from the lake of Bracciano,
35 miles from Rome, whither it is partly conducted
by the aqueduct of the Acqua Paolina, otherwise
known as the ancient Aqua Trajana.