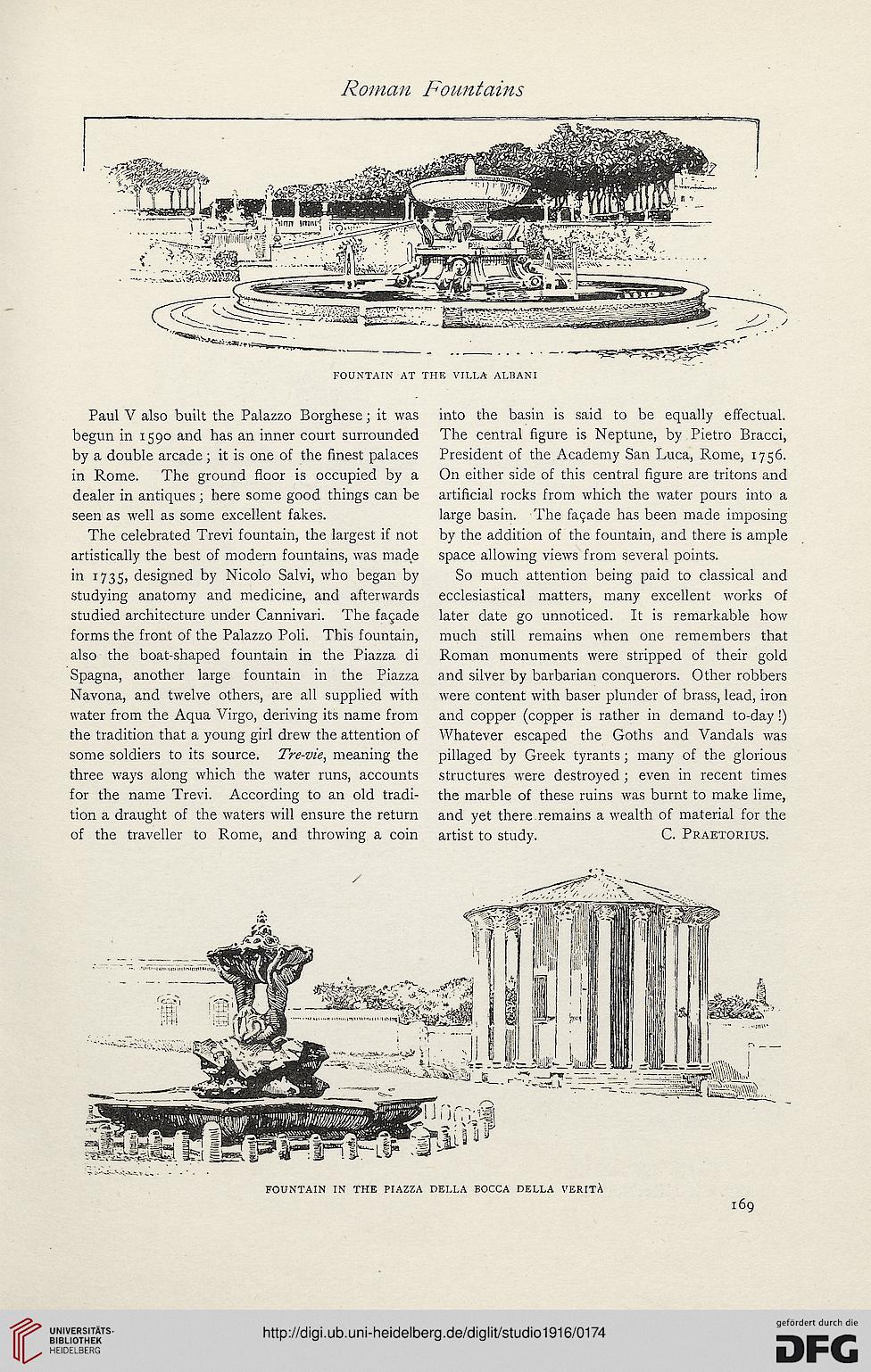 Paul V also built the Palazzo Borghese; it was
begun in 1590 and has an inner court surrounded
by a double arcade; it is one of the finest palaces
in Rome. The ground floor is occupied by a
dealer in antiques; here some good things can be
seen as well as some excellent fakes.

The celebrated Trevi fountain, the largest if not
artistically the best of modern fountains, was made
in 1735, designed by Nicolo Salvi, who began by
studying anatomy and medicine, and afterwards
studied architecture under Cannivari. The fagade
forms the front of the Palazzo Poli. This fountain,
also the boat-shaped fountain in the Piazza di
Spagna, another large fountain in the Piazza
Navona, and twelve others, are all supplied with
water from the Aqua Virgo, deriving its name from
the tradition that a young girl drew the attention of
some soldiers to its source. Tre-vie, meaning the
three ways along which the water runs, accounts
for the name Trevi. According to an old tradi-
tion a draught of the waters will ensure the return
of the traveller to Rome, and throwing a coin

into the basin is said to be equally effectual.
The central figure is Neptune, by Pietro Bracci,
President of the Academy San Luca, Rome, 1756.
On either side of this central figure are tritons and
artificial rocks from which the water pours into a
large basin. The faijade has been made imposing
by the addition of the fountain, and there is ample
space allowing views from several points.

So much attention being paid to classical and
ecclesiastical matters, many excellent works of
later date go unnoticed. It is remarkable how
much still remains when one remembers that
Roman monuments were stripped of their gold
and silver by barbarian conquerors. Other robbers
were content with baser plunder of brass, lead, iron
and copper (copper is rather in demand to-day !)
Whatever escaped the Goths and Vandals was
pillaged by Greek tyrants; many of the glorious
structures were destroyed; even in recent times
the marble of these ruins was burnt to make lime,
and yet there, remains a wealth of material for the
artist to study. C. Praetorius.