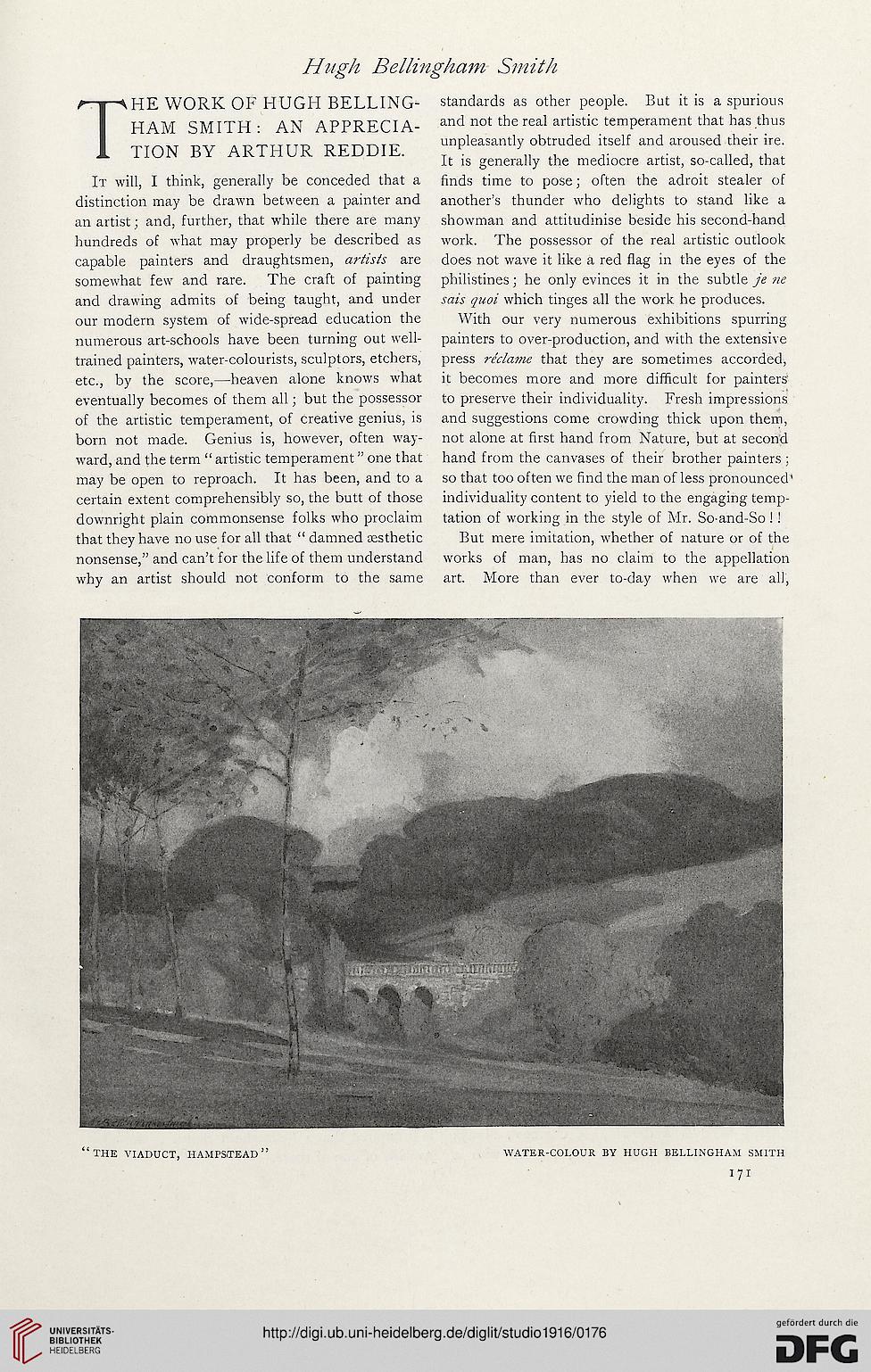 The work of hugh Belling-
ham SMITH: AN APPRECIA-
TION BY ARTHUR REDDIE.

It will, I think, generally be conceded that a
distinction may be drawn between a painter and
an artist; and, further, that while there are many
hundreds of what may properly be described as
capable painters and draughtsmen, artists are
somewhat few and rare. The craft of painting
and drawing admits of being taught, and under
our modern system of wide-spread education the
numerous art-schools have been turning out well-
trained painters, water-colourists, sculptors, etchers,
etc., by the score,—heaven alone knows what
eventually becomes of them all; but the possessor
of the artistic temperament, of creative genius, is
born not made. Genius is, however, often way-
ward, and the term “ artistic temperament ” one that
may be open to reproach. It has been, and to a
certain extent comprehensibly so, the butt of those
downright plain commonsense folks who proclaim
that they have no use for all that “ damned aesthetic
nonsense,” and can’t for the life of them understand
why an artist should not conform to the same

standards as other people. But it is a spurious
and not the real artistic temperament that has thus
unpleasantly obtruded itself and aroused their ire.
It is generally the mediocre artist, so-called, that
finds time to pose; often the adroit stealer of
another’s thunder who delights to stand like a
showman and attitudinise beside his second-hand
work. The possessor of the real artistic outlook
does not wave it like a red flag in the eyes of the
philistines; he only evinces it in the subtle je ne
sais quoi which tinges all the work he produces.

With our very numerous exhibitions spurring
painters to over-production, and with the extensive
press reclame that they are sometimes accorded,
it becomes more and more difficult for painters
to preserve their individuality. Fresh impressions
and suggestions come crowding thick upon them,
not alone at first hand from Nature, but at second
hand from the canvases of their brother painters ;
so that too often we find the man of less pronounced'
individuality content to yield to the engaging temp-
tation of working in the style of Mr. So-and-So!!

But mere imitation, whether of nature or of the
works of man, has no claim to the appellation
art. More than ever to-day when we are all,