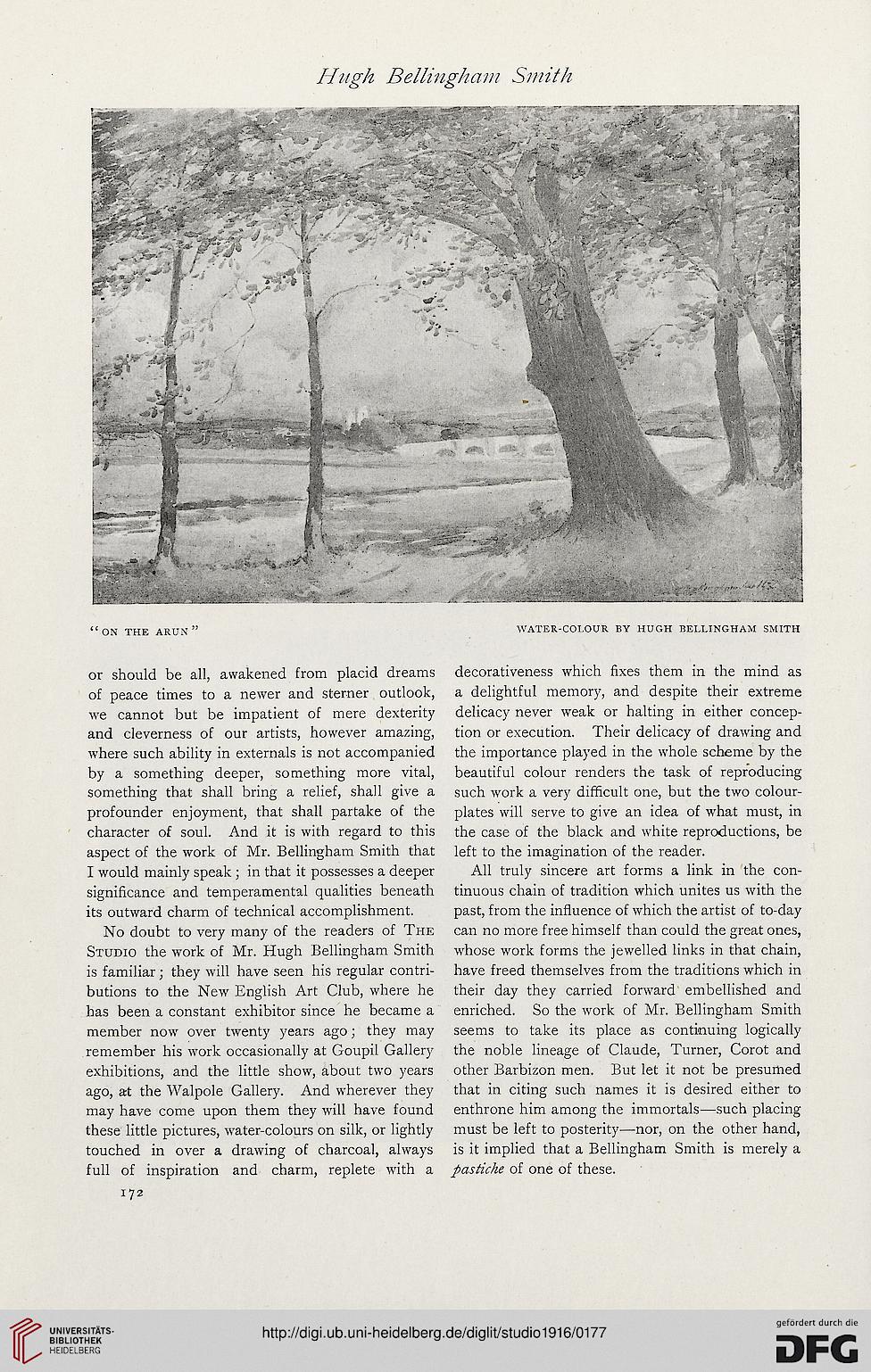 “ON THE ARUN ” WATER-COLOUR BY HUGH BELLINGHAM SMITH

or should be all, awakened from placid dreams
of peace times to a newer and sterner outlook,
we cannot but be impatient of mere dexterity
and cleverness of our artists, however amazing,
where such ability in externals is not accompanied
by a something deeper, something more vital,
something that shall bring a relief, shall give a
profounder enjoyment, that shall partake of the
character of soul. And it is with regard to this
aspect of the work of Mr. Bellingham Smith that
I would mainly speak; in that it possesses a deeper
significance and temperamental qualities beneath
its outward charm of technical accomplishment.

No doubt to very many of the readers of The
Studio the work of Mr. Hugh Bellingham Smith
is familiar; they will have seen his regular contri-
butions to the New English Art Club, where he
has been a constant exhibitor since he became a
member now over twenty years ago; they may
remember his work occasionally at Goupil Gallery
exhibitions, and the little show, about two years
ago, at the Walpole Gallery. And wherever they
may have come upon them they will have found
these little pictures, water-colours on silk, or lightly
touched in over a drawing of charcoal, always
full of inspiration and charm, replete with a
172

decorativeness which fixes them in the mind as
a delightful memory, and despite their extreme
delicacy never weak or halting in either concep-
tion or execution. Their delicacy of drawing and
the importance played in the whole scheme by the
beautiful colour renders the task of reproducing
such work a very difficult one, but the two colour-
plates will serve to give an idea of what must, in
the case of the black and white reproductions, be
left to the imagination of the reader.

All truly sincere art forms a link in the con-
tinuous chain of tradition which unites us with the
past, from the influence of which the artist of to-day
can no more free himself than could the great ones,
whose work forms the jewelled links in that chain,
have freed themselves from the traditions which in
their day they carried forward embellished and
enriched. So the work of Mr. Bellingham Smith
seems to take its place as continuing logically
the noble lineage of Claude, Turner, Corot and
other Barbizon men. But let it not be presumed
that in citing such names it is desired either to
enthrone him among the immortals—such placing
must be left to posterity—nor, on the other hand,
is it implied that a Bellingham Smith is merely a
pastiche of one of these.