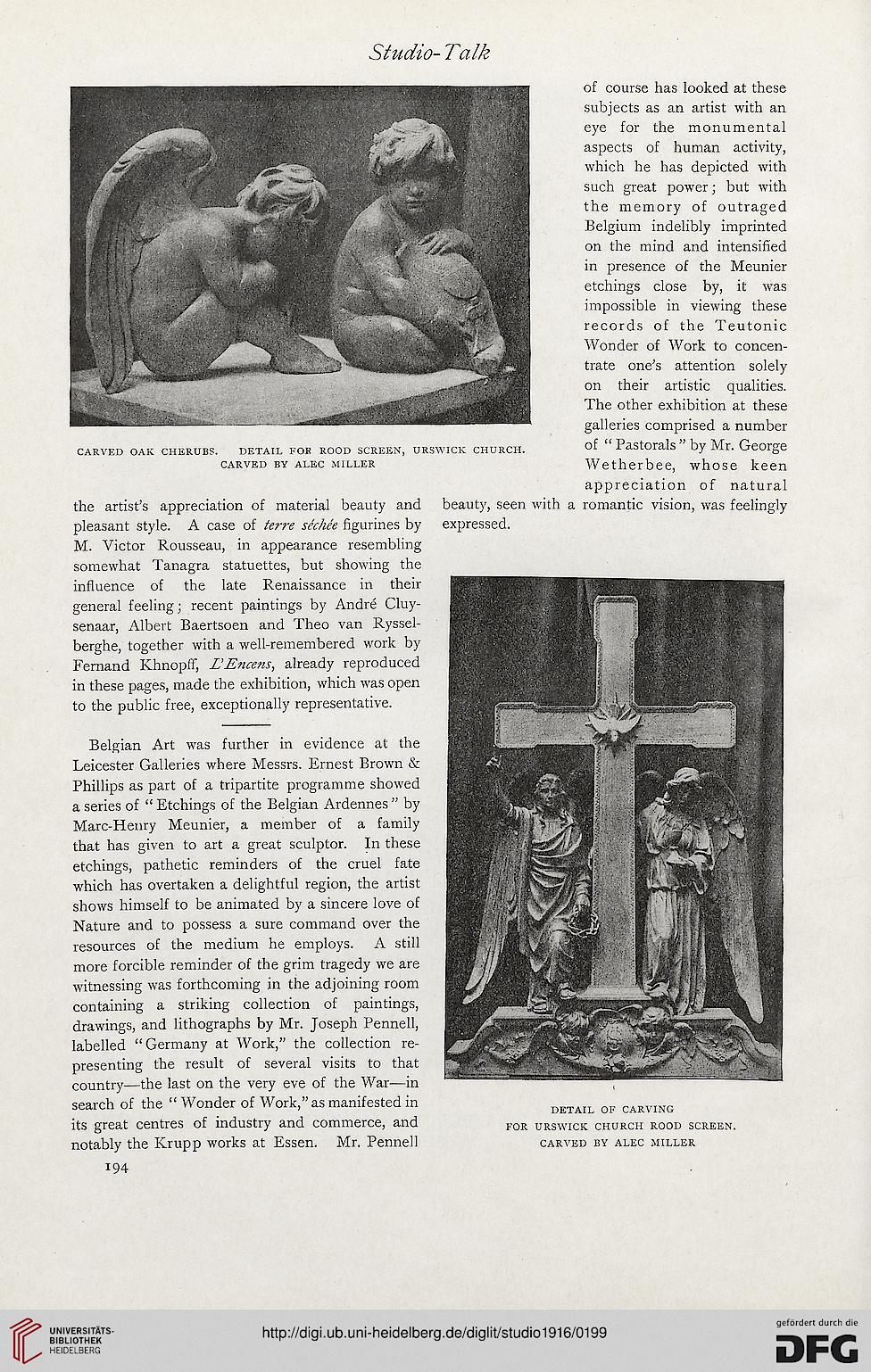 the artist’s appreciation of material beauty and
pleasant style. A case of terre scchee figurines by
M. Victor Rousseau, in appearance resembling
somewhat Tanagra statuettes, but showing the
influence of the late Renaissance in their
general feeling; recent paintings by Andre Cluy-
senaar, Albert Baertsoen and Theo van Ryssel-
berghe, together with a well-remembered work by
Fernand Khnopff, L’Encens, already reproduced
in these pages, made the exhibition, which was open
to the public free, exceptionally representative.

Belgian Art was further in evidence at the
Leicester Galleries where Messrs. Ernest Brown &
Phillips as part of a tripartite programme showed
a series of “ Etchings of the Belgian Ardennes ” by
Marc-Henry Meunier, a member of a family
that has given to art a great sculptor. In these
etchings, pathetic reminders of the cruel fate
which has overtaken a delightful region, the artist
shows himself to be animated by a sincere love of
Nature and to possess a sure command over the
resources of the medium he employs. A still
more forcible reminder of the grim tragedy we are
witnessing was forthcoming in the adjoining room
containing a striking collection of paintings,
drawings, and lithographs by Mr. Joseph Pennell,
labelled “Germany at Work,” the collection re-
presenting the result of several visits to that
country—the last on the very eve of the War—in
search of the “ Wonder of Work,” as manifested in
its great centres of industry and commerce, and
notably the Krupp works at Essen. Mr. Pennell
194

of course has looked at these
subjects as an artist with an
eye for the monumental
aspects of human activity,
which he has depicted with
such great power; but with
the memory of outraged
Belgium indelibly imprinted
on the mind and intensified
in presence of the Meunier
etchings close by, it was
impossible in viewing these
records of the Teutonic
Wonder of Work to concen-
trate one’s attention solely
on their artistic qualities.
The other exhibition at these
galleries comprised a number
of “ Pastorals ” by Mr. George
Wetherbee, whose keen
appreciation of natural
beauty, seen with a romantic vision, was feelingly
expressed.