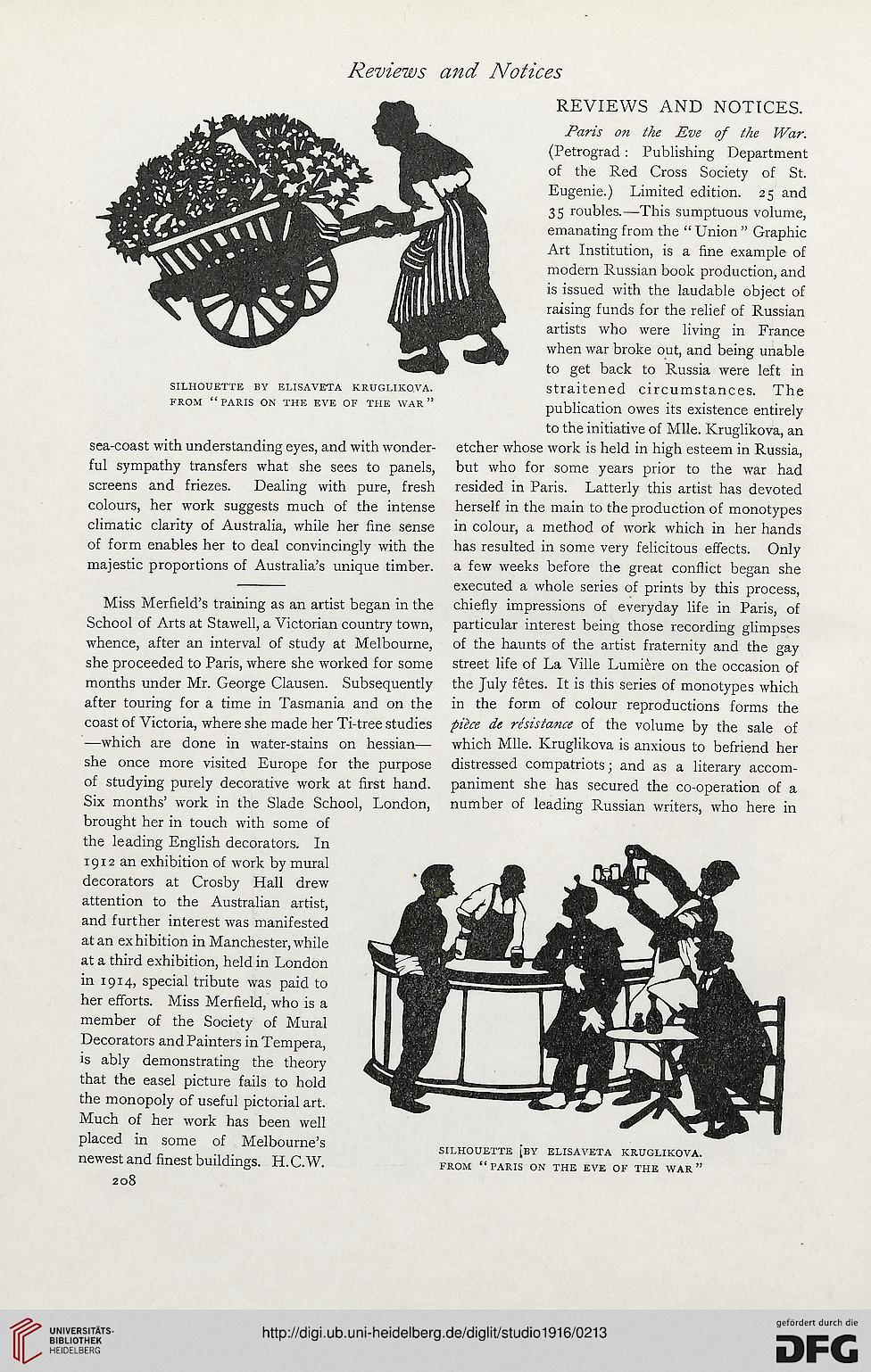 SILHOUETTE BY ELISAVETA KRUGLIKOVA.
FROM “PARIS ON THE EVE OF THE WAR ”

sea-coast with understanding eyes, and with wonder-
ful sympathy transfers what she sees to panels,
screens and friezes. Dealing with pure, fresh
colours, her work suggests much of the intense
climatic clarity of Australia, while her fine sense
of form enables her to deal convincingly with the
majestic proportions of Australia’s unique timber.

Miss Merfield’s training as an artist began in the
School of Arts at Stawell, a Victorian country town,
whence, after an interval of study at Melbourne,
she proceeded to Paris, where she worked for some
months under Mr. George Clausen. Subsequently
after touring for a time in Tasmania and on the
coast of Victoria, where she made her Ti-tree studies
—which are done in water-stains on hessian—
she once more visited Europe for the purpose
of studying purely decorative work at first hand.
Six months’ work in the Slade School, London,
brought her in touch with some of
the leading English decorators. In
1912 an exhibition of work by mural
decorators at Crosby Hall drew
attention to the Australian artist,
and further interest was manifested
at an exhibition in Manchester, while
at a third exhibition, held in London
in 1914, special tribute was paid to
her efforts. Miss Merfield, who is a
member of the Society of Mural
Decorators and Painters in Tempera,
is ably demonstrating the theory
that the easel picture fails to hold
the monopoly of useful pictorial art.

Much of her work has been well
placed in some of Melbourne’s
newest and finest buildings. H. C. W.

Paris on the Eve of the War.
(Petrograd: Publishing Department
of the Red Cross Society of St.
Eugenie.) Limited edition. 25 and
35 roubles.—This sumptuous volume,
emanating from the “ Union ” Graphic
Art Institution, is a fine example of
modern Russian book production, and
is issued with the laudable object of
raising funds for the relief of Russian
artists who were living in France
when war broke out, and being unable
to get back to Russia were left in
straitened circumstances. The
publication owes its existence entirely
to the initiative of Mile. Kruglikova, an
etcher whose work is held in high esteem in Russia,
but who for some years prior to the war had
resided in Paris. Latterly this artist has devoted
herself in the main to the production of monotypes
in colour, a method of work which in her hands
has resulted in some very felicitous effects. Only
a few weeks before the great conflict began she
executed a whole series of prints by this process,
chiefly impressions of everyday life in Paris, of
particular interest being those recording glimpses
of the haunts of the artist fraternity and the gay
street life of La Ville Lumiere on the occasion of
the July fetes. It is this series of monotypes which
in the form of colour reproductions forms the
piece de resistance of the volume by the sale of
which Mile. Kruglikova is anxious to befriend her
distressed compatriots; and as a literary accom-
paniment she has secured the co-operation of a
number of leading Russian writers, who here in