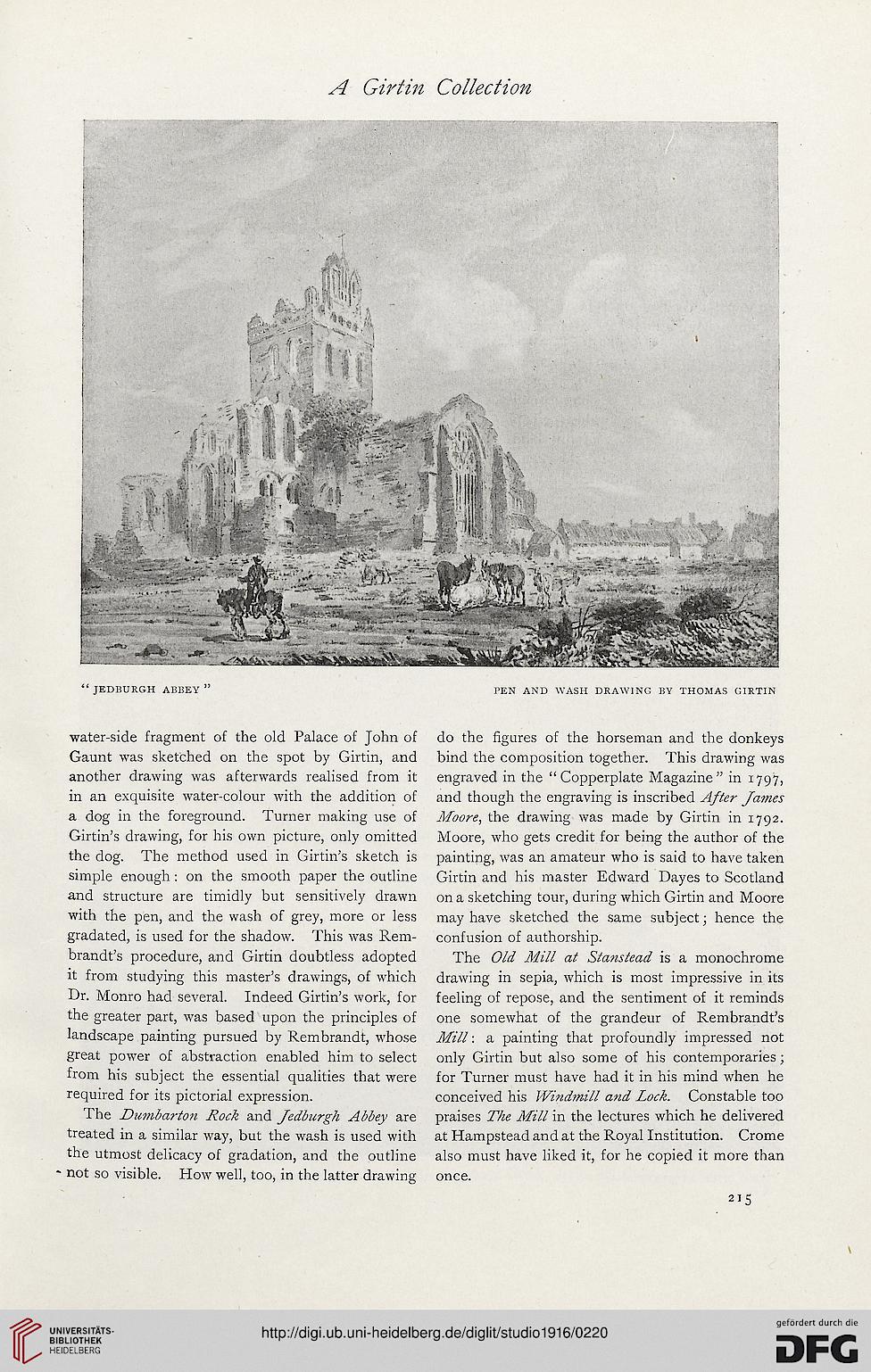 water-side fragment of the old Palace of John of
Gaunt was sketched on the spot by Girtin, and
another drawing was afterwards realised from it
in an exquisite water-colour with the addition of
a dog in the foreground. Turner making use of
Girtin’s drawing, for his own picture, only omitted
the dog. The method used in Girtin’s sketch is
simple enough : on the smooth paper the outline
and structure are timidly but sensitively drawn
with the pen, and the wash of grey, more or less
gradated, is used for the shadow. This was Rem-
brandt’s procedure, and Girtin doubtless adopted
it from studying this master’s drawings, of which
Dr. Monro had several. Indeed Girtin’s work, for
the greater part, was based upon the principles of
landscape painting pursued by Rembrandt, whose
great power of abstraction enabled him to select
from his subject the essential qualities that were
required for its pictorial expression.

The Dumbarton Rock and Jedburgh Abbey are
treated in a similar way, but the wash is used with
the utmost delicacy of gradation, and the outline
* not so visible. How well, too, in the latter drawing

do the figures of the horseman and the donkeys
bind the composition together. This drawing was
engraved in the “Copperplate Magazine” in 1797,
and though the engraving is inscribed After James
Moore, the drawing was made by Girtin in 1792.
Moore, who gets credit for being the author of the
painting, was an amateur who is said to have taken
Girtin and his master Edward Dayes to Scotland
on a sketching tour, during which Girtin and Moore
may have sketched the same subject; hence the
confusion of authorship.

The Old Mill at Stanstead is a monochrome
drawing in sepia, which is most impressive in its
feeling of repose, and the sentiment of it reminds
one somewhat of the grandeur of Rembrandt’s
Mill: a painting that profoundly impressed not
only Girtin but also some of his contemporaries;
for Turner must have had it in his mind when he
conceived his Windmill and Lock. Constable too
praises The Mill in the lectures which he delivered
at Hampstead and at the Royal Institution. Crome
also must have liked it, for he copied it more than
once.