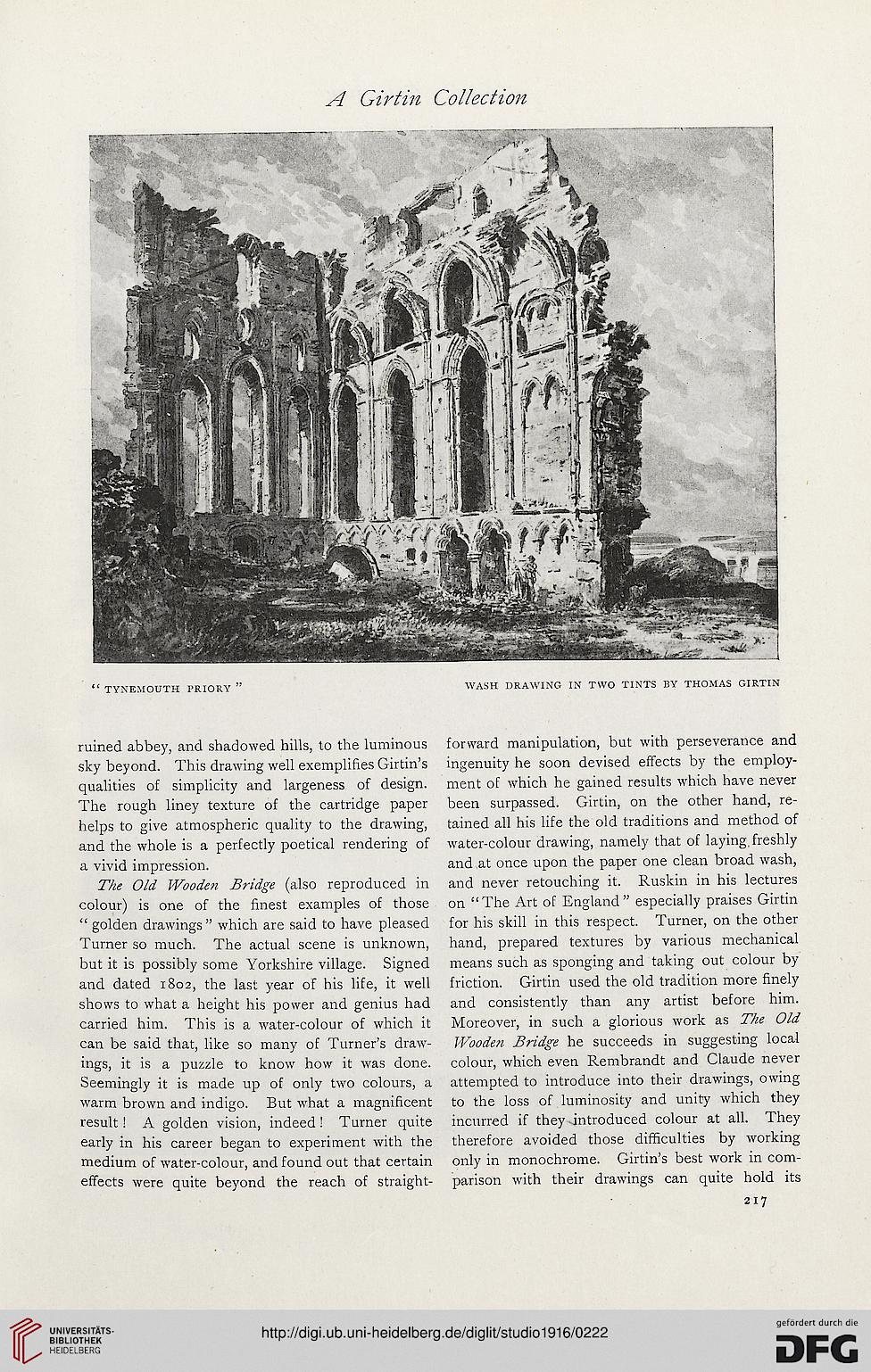 ruined abbey, and shadowed hills, to the luminous
sky beyond. This drawing well exemplifies Girtin’s
qualities of simplicity and largeness of design.
The rough liney texture of the cartridge paper
helps to give atmospheric quality to the drawing,
and the whole is a perfectly poetical rendering of
a vivid impression.

The Old Wooden Bridge (also reproduced in
colour) is one of the finest examples of those
“golden drawings” which are said to have pleased
Turner so much. The actual scene is unknown,
but it is possibly some Yorkshire village. Signed
and dated 1802, the last year of his life, it well
shows to what a height his power and genius had
carried him. This is a water-colour of which it
can be said that, like so many of Turner’s draw-
ings, it is a puzzle to know how it was done.
Seemingly it is made up of only two colours, a
warm brown and indigo. But what a magnificent
result ! A golden vision, indeed ! Turner quite
early in his career began to experiment with the
medium of water-colour, and found out that certain
effects were quite beyond the reach of straight-

forward manipulation, but with perseverance and
ingenuity he soon devised effects by the employ-
ment of which he gained results which have never
been surpassed. Girtin, on the other hand, re-
tained all his life the old traditions and method of
water-colour drawing, namely that of laying, freshly
and at once upon the paper one dean broad wash,
and never retouching it. Ruskin in his lectures
on “The Art of England” especially praises Girtin
for his skill in this respect. Turner, on the other
hand, prepared textures by various mechanical
means such as sponging and taking out colour by
friction. Girtin used the old tradition more finely
and consistently than any artist before him.
Moreover, in such a glorious work as The Old
Wooden Bridge he succeeds in suggesting local
colour, which even Rembrandt and Claude never
attempted to introduce into their drawings, owing
to the loss of luminosity and unity which they
incurred if they introduced colour at all. They
therefore avoided those difficulties by working
only in monochrome. Girtin’s best work in com-
parison with their drawings can quite hold its