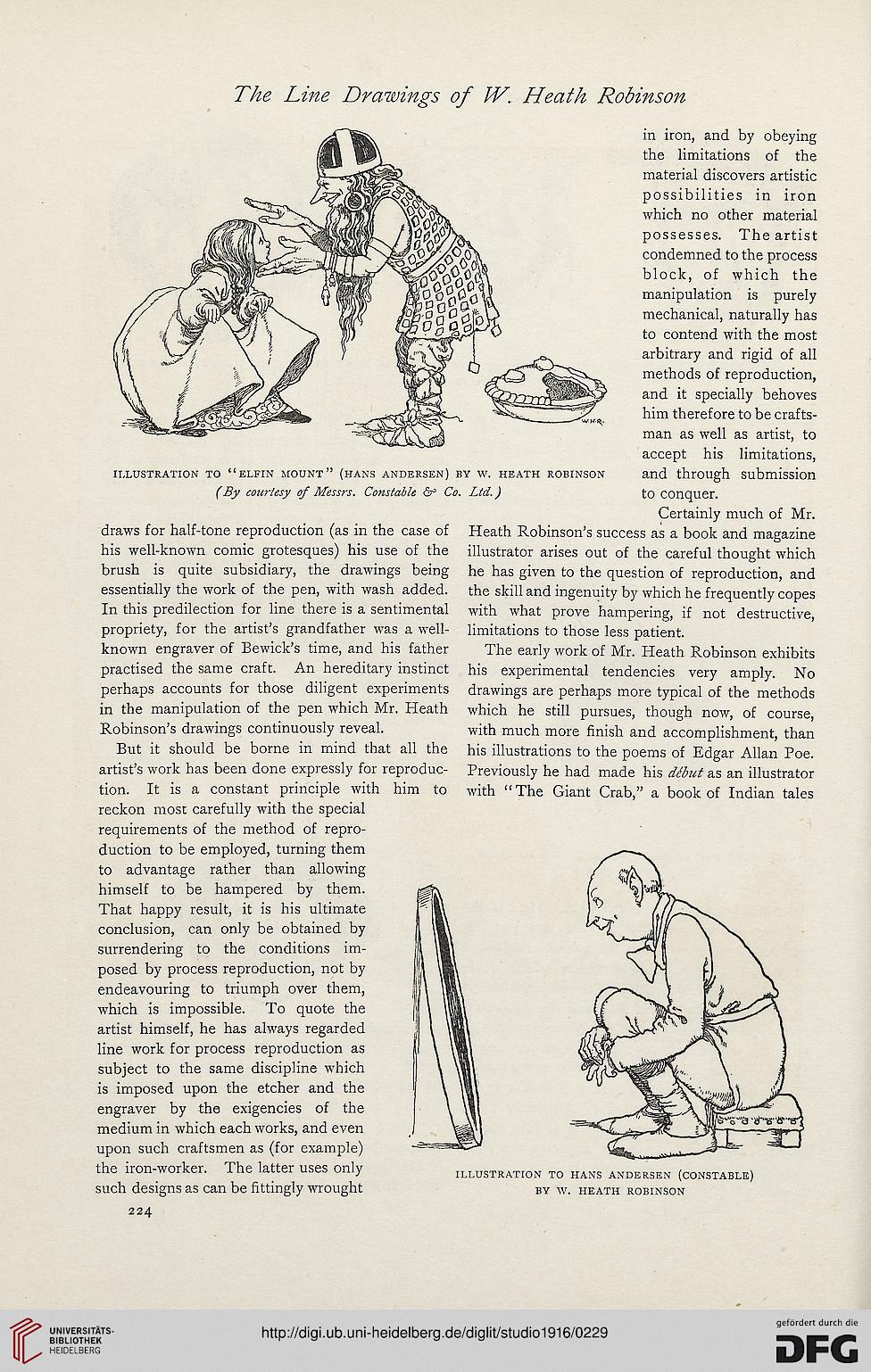 draws for half-tone reproduction (as in the case of
his well-known comic grotesques) his use of the
brush is quite subsidiary, the drawings being
essentially the work of the pen, with wash added.
In this predilection for line there is a sentimental
propriety, for the artist’s grandfather was a well-
known engraver of Bewick’s time, and his father
practised the same craft. An hereditary instinct
perhaps accounts for those diligent experiments
in the manipulation of the pen which Mr. Heath
Robinson’s drawings continuously reveal.

But it should be borne in mind that all the
artist’s work has been done expressly for reproduc-
tion. It is a constant principle with him to
reckon most carefully with the special
requirements of the method of repro-
duction to be employed, turning them
to advantage rather than allowing
himself to be hampered by them.

That happy result, it is his ultimate
conclusion, can only be obtained by
surrendering to the conditions im-
posed by process reproduction, not by
endeavouring to triumph over them,
which is impossible. To quote the
artist himself, he has always regarded
line work for process reproduction as
subject to the same discipline which
is imposed upon the etcher and the
engraver by the exigencies of the
medium in which each works, and even
upon such craftsmen as (for example)
the iron-worker. The latter uses only
such designs as can be fittingly wrought

in iron, and by obeying
the limitations of the
material discovers artistic
possibilities in iron
which no other material
possesses. The artist
condemned to the process
block, of which the
manipulation is purely
mechanical, naturally has
to contend with the most
arbitrary and rigid of all
methods of reproduction,
and it specially behoves
him therefore to be crafts-
man as well as artist, to
accept his limitations,
and through submission
to conquer.

Certainly much of Mr.
Heath Robinson’s success as a book and magazine
illustrator arises out of the careful thought which
he has given to the question of reproduction, and
the skill and ingenuity by which he frequently copes
with what prove hampering, if not destructive,
limitations to those less patient.

The early work of Mr. Heath Robinson exhibits
his experimental tendencies very amply. No
drawings are perhaps more typical of the methods
which he still pursues, though now, of course,
with much more finish and accomplishment, than
his illustrations to the poems of Edgar Allan Poe.
Previously he had made his dtbut as an illustrator
with “The Giant Crab,” a book of Indian tales