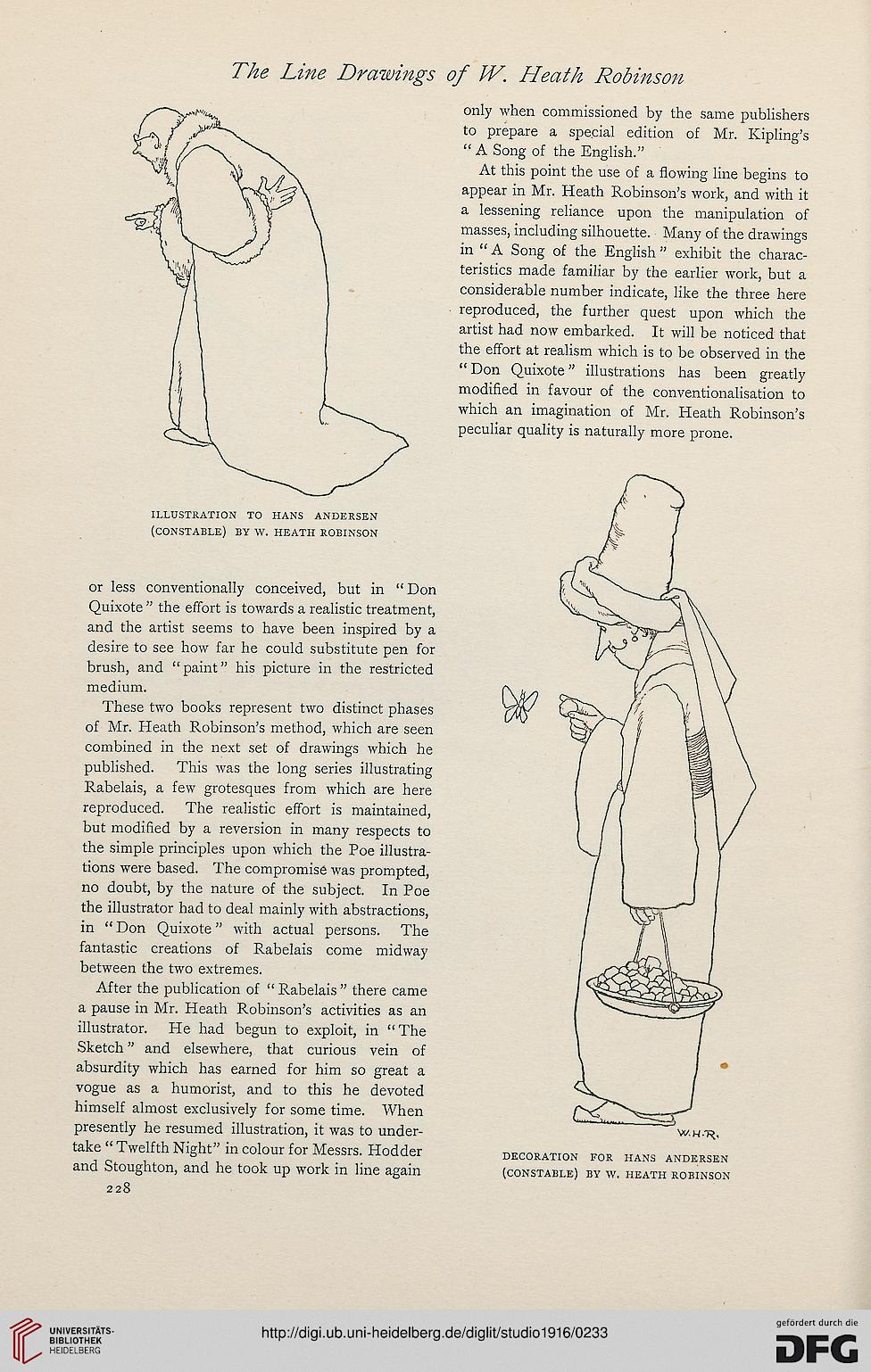 or less conventionally conceived, but in “Don
Quixote ” the effort is towards a realistic treatment,
and the artist seems to have been inspired by a
desire to see how far he could substitute pen for
brush, and “paint” his picture in the restricted
medium.

These two books represent two distinct phases
of Mr. Heath Robinson’s method, which are seen
combined in the next set of drawings which he
published. This was the long series illustrating
Rabelais, a few grotesques from which are here
reproduced. The realistic effort is maintained,
but modified by a reversion in many respects to
the simple principles upon which the Poe illustra-
tions were based. The compromise was prompted,
no doubt, by the nature of the subject. In Poe
the illustrator had to deal mainly with abstractions,
in “ Don Quixote ” with actual persons. The
fantastic creations of Rabelais come midway
between the two extremes.

After the publication of “ Rabelais ” there came
a pause in Mr. Heath Robinson’s activities as an
illustrator. He had begun to exploit, in “The
Sketch ” and elsewhere, that curious vein of
absurdity which has earned for him so great a
vogue as a humorist, and to this he devoted
himself almost exclusively for some time. When
presently he resumed illustration, it was to under-
take “ Twelfth Night” in colour for Messrs. Hodder
and Stoughton, and he took up work in line again
228

only when commissioned by the same publishers
to prepare a special edition of Mr. Kipling’s
“ A Song of the English.”

At this point the use of a flowing line begins to
appear in Mr. Heath Robinson’s work, and with it
a lessening reliance upon the manipulation of
masses, including silhouette. Many of the drawings
in “ A Song of the English ” exhibit the charac-
teristics made familiar by the earlier work, but a
considerable number indicate, like the three here
reproduced, the further quest upon which the
artist had now embarked. It will be noticed that
the effort at realism which is to be observed in the
“ Don Quixote ” illustrations has been greatly
modified in favour of the conventionalisation to
which an imagination of Mr. Heath Robinson’s
peculiar quality is naturally more prone.