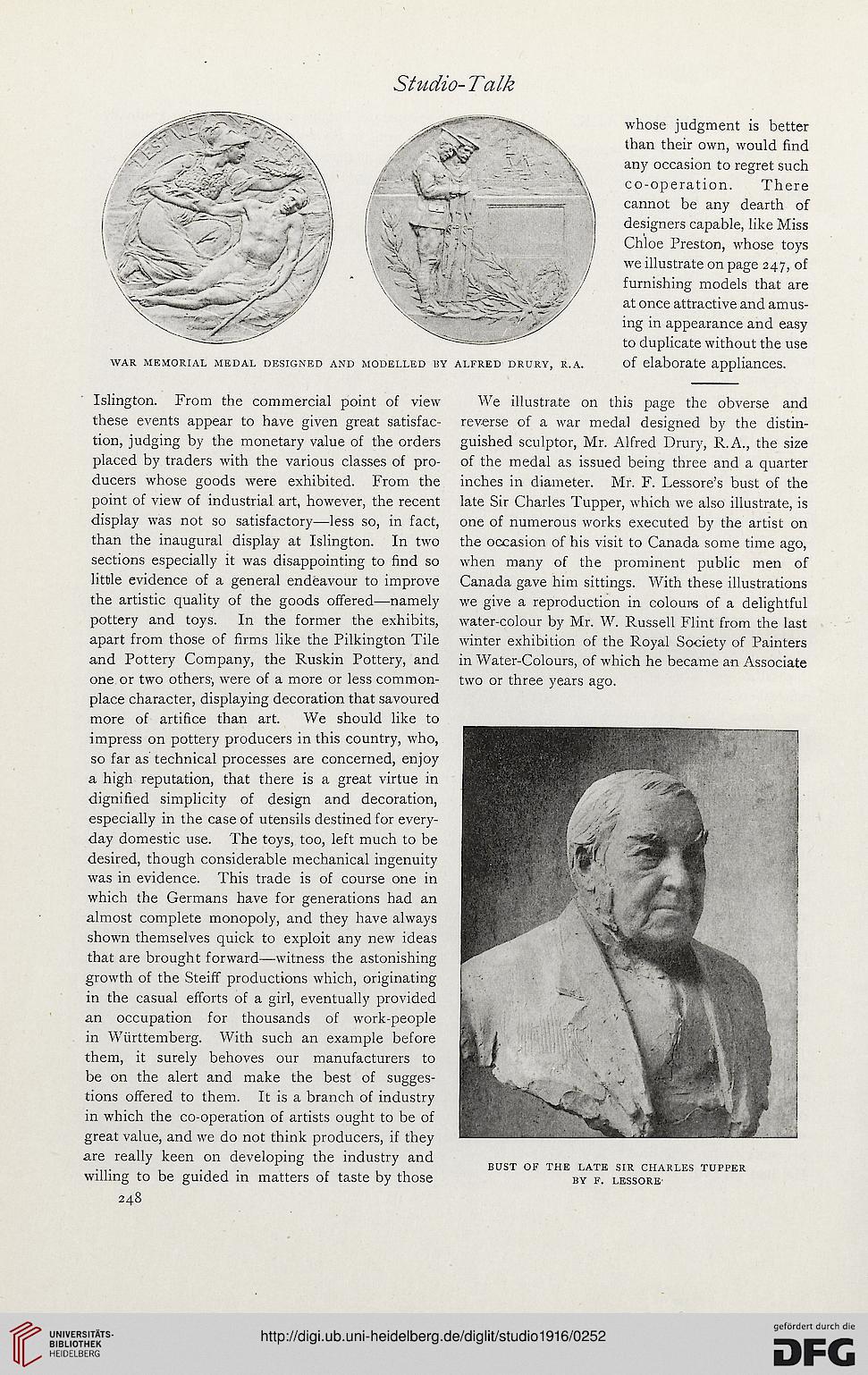 Islington. From the commercial point of view
these events appear to have given great satisfac-
tion, judging by the monetary value of the orders
placed by traders with the various classes of pro-
ducers whose goods were exhibited. From the
point of view of industrial art, however, the recent
display was not so satisfactory—less so, in fact,
than the inaugural display at Islington. In two
sections especially it -was disappointing to find so
little evidence of a general endeavour to improve
the artistic quality of the goods offered—namely
pottery and toys. In the former the exhibits,
apart from those of firms like the Pilkington Tile
and Pottery Company, the Ruskin Pottery, and
one or two others-, were of a more or less common-
place character, displaying decoration that savoured
more of artifice than art. We should like to
impress on pottery producers in this country, who,
so far as technical processes are concerned, enjoy
a high reputation, that there is a great virtue in
dignified simplicity of design and decoration,
especially in the case of utensils destined for every-
day domestic use. The toys, too, left much to be
desired, though considerable mechanical ingenuity
was in evidence. This trade is of course one in
which the Germans have for generations had an
almost complete monopoly, and they have always
shown themselves quick to exploit any new ideas
that are brought forward—witness the astonishing
growth of the Steiff productions which, originating
in the casual efforts of a girl, eventually provided
an occupation for thousands of work-people
in Wiirttemberg. With such an example before
them, it surely behoves our manufacturers to
be on the alert and make the best of sugges-
tions offered to them. It is a branch of industry
in which the co-operation of artists ought to be of
great value, and we do not think producers, if they
are really keen on developing the industry and
willing to be guided in matters of taste by those
248

whose judgment is better
than their own, would find
any occasion to regret such
co-operation. There
cannot be any dearth of
designers capable, like Miss
Chloe Preston, whose toys
we illustrate on page 247, of
furnishing models that are
at once attractive and amus-
ing in appearance and easy
to duplicate without the use
of elaborate appliances.

We illustrate on this page the obverse and
reverse of a war medal designed by the distin-
guished sculptor, Mr. Alfred Drury, R.A., the size
of the medal as issued being three and a quarter
inches in diameter. Mr. F. Lessore’s bust of the
late Sir Charles Tupper, which we also illustrate, is
one of numerous works executed by the artist on
the occasion of his visit to Canada some time ago,
when many of the prominent public men of
Canada gave him sittings. With these illustrations
we give a reproduction in colours of a delightful
water-colour by Mr. W. Russell Flint from the last
winter exhibition of the Royal Society of Painters
in Water-Colours, of which he became an Associate
two or three years ago.

BUST OF THE LATE SIR CHARLES TUPPER
BY F. LESSORS'