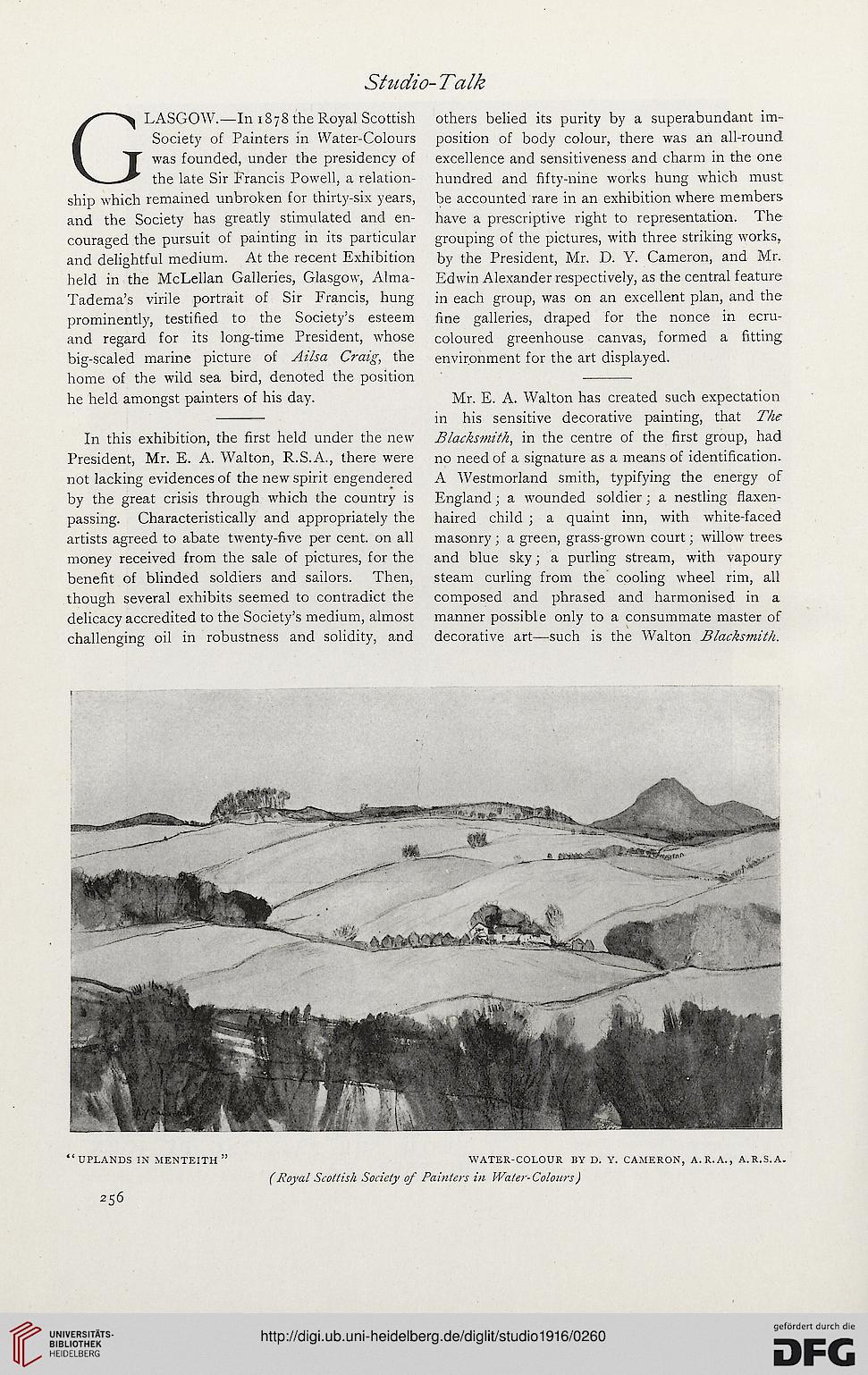 GLASGOW.—In 1878 the Royal Scottish
Society of Painters in Water-Colours
was founded, under the presidency of
the late Sir Francis Powell, a relation-
ship which remained unbroken for thirty-six years,
and the Society has greatly stimulated and en-
couraged the pursuit of painting in its particular
and delightful medium. At the recent Exhibition
held in the McLellan Galleries, Glasgow, Alma-
Tadema’s virile portrait of Sir Francis, hung
prominently, testified to the Society’s esteem
and regard for its long-time President, whose
big-scaled marine picture of Ailsa Craig, the
home of the wild sea bird, denoted the position
he held amongst painters of his day.

In this exhibition, the first held under the new
President, Mr. E. A. Walton, R.S.A., there were
not lacking evidences of the new spirit engendered
by the great crisis through which the country is
passing. Characteristically and appropriately the
artists agreed to abate twenty-five per cent, on all
money received from the sale of pictures, for the
benefit of blinded soldiers and sailors. Then,
though several exhibits seemed to contradict the
delicacy accredited to the Society’s medium, almost
challenging oil in robustness and solidity, and

others belied its purity by a superabundant im-
position of body colour, there was an all-round
excellence and sensitiveness and charm in the one
hundred and fifty-nine works hung which must
be accounted rare in an exhibition where members
have a prescriptive right to representation. The
grouping of the pictures, with three striking works,
by the President, Mr. D. Y. Cameron, and Mr.
Edwin Alexander respectively, as the central feature
in each group, was on an excellent plan, and the
fine galleries, draped for the nonce in ecru-
coloured greenhouse canvas, formed a fitting
environment for the art displayed.

Mr. E. A. Walton has created such expectation
in his sensitive decorative painting, that The
Blacksmith, in the centre of the first group, had
no need of a signature as a means of identification.
A Westmorland smith, typifying the energy of
England; a wounded soldier; a nestling flaxen-
haired child ; a quaint inn, with white-faced
masonry ; a green, grass-grown court; willow trees
and blue sky; a purling stream, with vapoury
steam curling from the cooling wheel rim, all
composed and phrased and harmonised in a
manner possible only to a consummate master of
decorative art—such is the Walton Blacksmith.