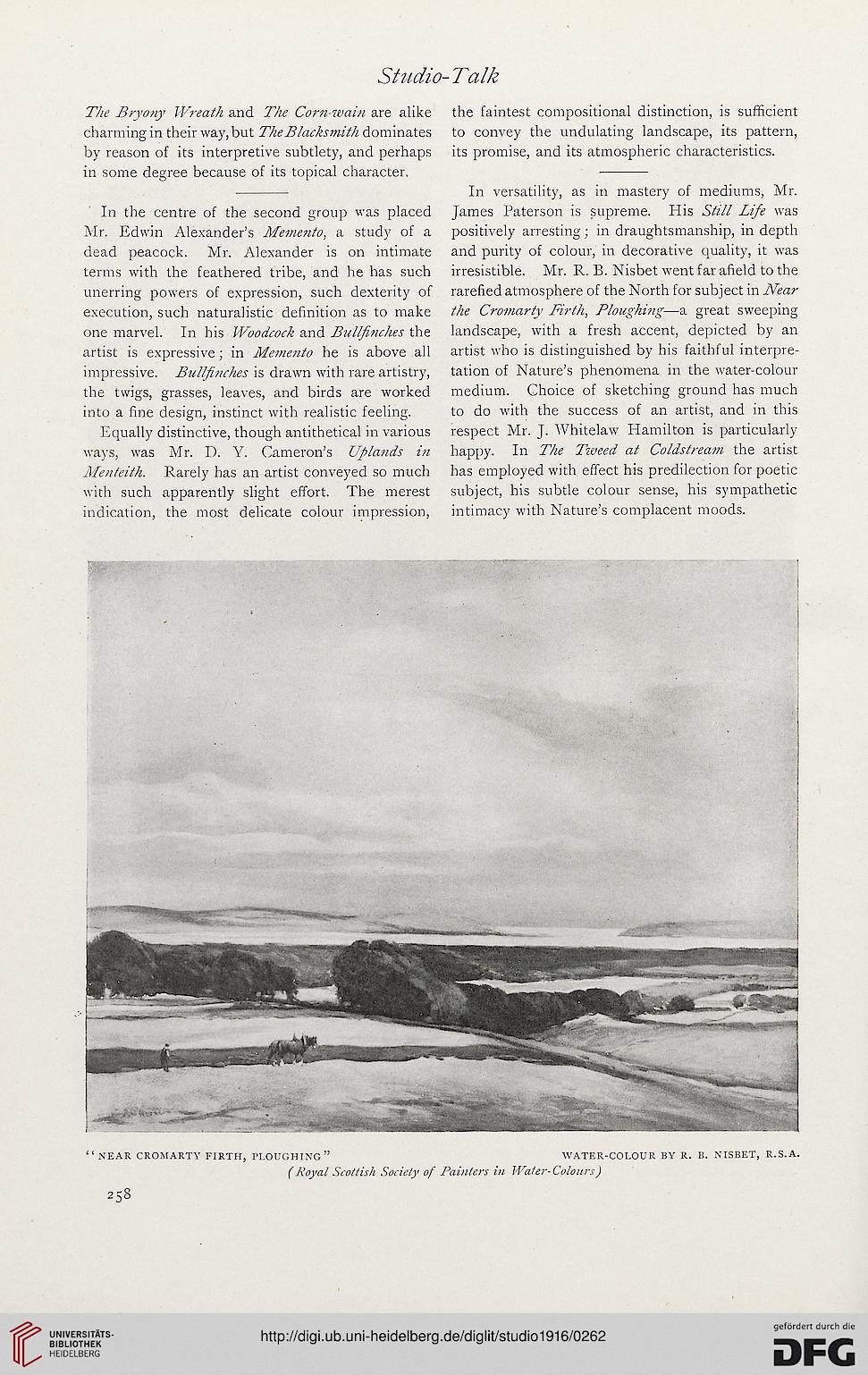 The Bryony Wreath and The Corn-wain are alike
charming in their way, but The Blacksmith dominates
by reason of its interpretive subtlety, and perhaps
in some degree because of its topical character.

In the centre of the second group was placed
Mr. Edwin Alexander’s Memento, a study of a
dead peacock. Mr. Alexander is on intimate
terms with the feathered tribe, and he has such
unerring powers of expression, such dexterity of
execution, such naturalistic definition as to make
one marvel. In his Woodcock and Bullfinches the
artist is expressive; in Memetito he is above all
impressive. Bullfinches is drawn with rare artistry,
the twigs, grasses, leaves, and birds are worked
into a fine design, instinct with realistic feeling.

Equally distinctive, though antithetical in various
ways, was Mr. D. Y. Cameron’s Uplands in
Menteith. Rarely has an artist conveyed so much
with such apparently slight effort. The merest
indication, the most delicate colour impression,

the faintest compositional distinction, is sufficient
to convey the undulating landscape, its pattern,
its promise, and its atmospheric characteristics.

In versatility, as in mastery of mediums, Mr.
James Paterson is supreme. His Still Life was
positively arresting; in draughtsmanship, in depth
and purity of colour, in decorative quality, it was
irresistible. Mr. R. B. Nisbet went far afield to the
rarefied atmosphere of the North for subject in Near
the Cromarty Firth, Ploughing—a great sweeping
landscape, with a fresh accent, depicted by an
artist who is distinguished by his faithful interpre-
tation of Nature’s phenomena in the water-colour
medium. Choice of sketching ground has much
to do with the success of an artist, and in this
respect Mr. J. Whitelaw Hamilton is particularly
happy. In The Tweed at Coldstream the artist
has employed with effect his predilection for poetic
subject, his subtle colour sense, his sympathetic
intimacy with Nature’s complacent moods.

“NEAR CROMARTY FIRTH, FLOUGHING” WATER-COLOUR BY R. B. NISBET, R.S.A.