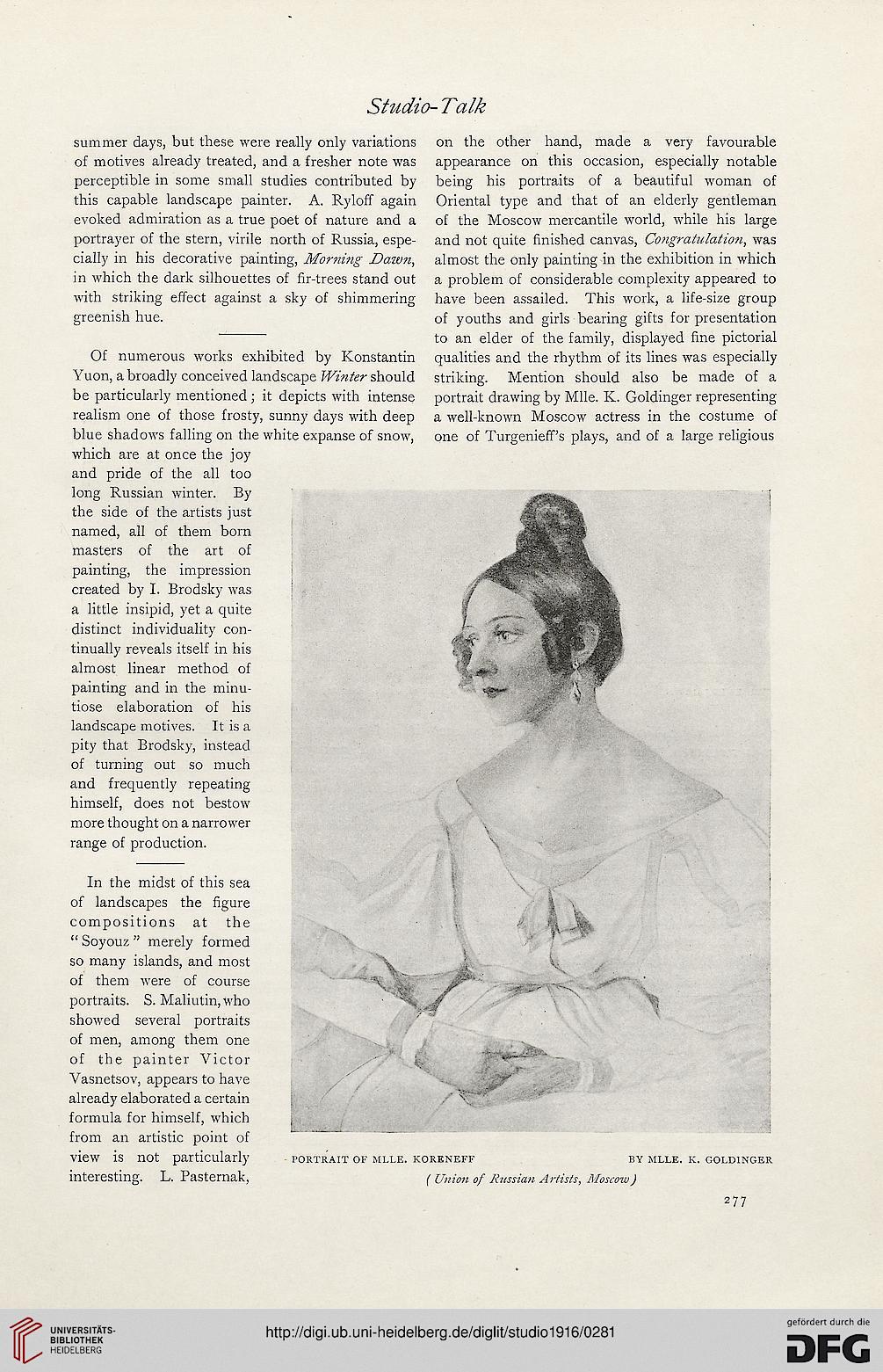 summer days, but these were really only variations
of motives already treated, and a fresher note was
perceptible in some small studies contributed by
this capable landscape painter. A. Ryloff again
evoked admiration as a true poet of nature and a
portrayer of the stern, virile north of Russia, espe-
cially in his decorative painting, Morning Dawn,
in which the dark silhouettes of fir-trees stand out
with striking effect against a sky of shimmering
greenish hue.

Of numerous works exhibited by Konstantin
Yuon, a broadly conceived landscape Winter should
be particularly mentioned; it depicts with intense
realism one of those frosty, sunny days with deep
blue shadows falling on the white expanse of snow,
which are at once the joy
and pride of the all too
long Russian winter. By
the side of the artists just
named, all of them born
masters of the art of
painting, the impression
created by I. Brodsky was
a little insipid, yet a quite
distinct individuality con-
tinually reveals itself in his
almost linear method of
painting and in the minu-
tiose elaboration of his
landscape motives. It is a
pity that Brodsky, instead
of turning out so much
and frequently repeating
himself, does not bestow
more thought on a narrower
range of production.

In the midst of this sea
of landscapes the figure
compositions at the
“ Soyouz ” merely formed
so many islands, and most
of them were of course
portraits. S. Maliutin, who
showed several portraits
of men, among them one
of the painter Victor
Vasnetsov, appears to have
already elaborated a certain
formula for himself, which
from an artistic point of
view is not particularly
interesting. L. Pasternak,

on the other hand, made a very favourable
appearance on this occasion, especially notable
being his portraits of a beautiful woman of
Oriental type and that of an elderly gentleman
of the Moscow mercantile world, while his large
and not quite finished canvas, Congratulation, was
almost the only painting in the exhibition in which
a problem of considerable complexity appeared to
have been assailed. This work, a life-size group
of youths and girls bearing gifts for presentation
to an elder of the family, displayed fine pictorial
qualities and the rhythm of its lines was especially
striking. Mention should also be made of a
portrait drawing by Mile. K. Goldinger representing
a well-known Moscow actress in the costume of
one of Turgenieff’s plays, and of a large religious