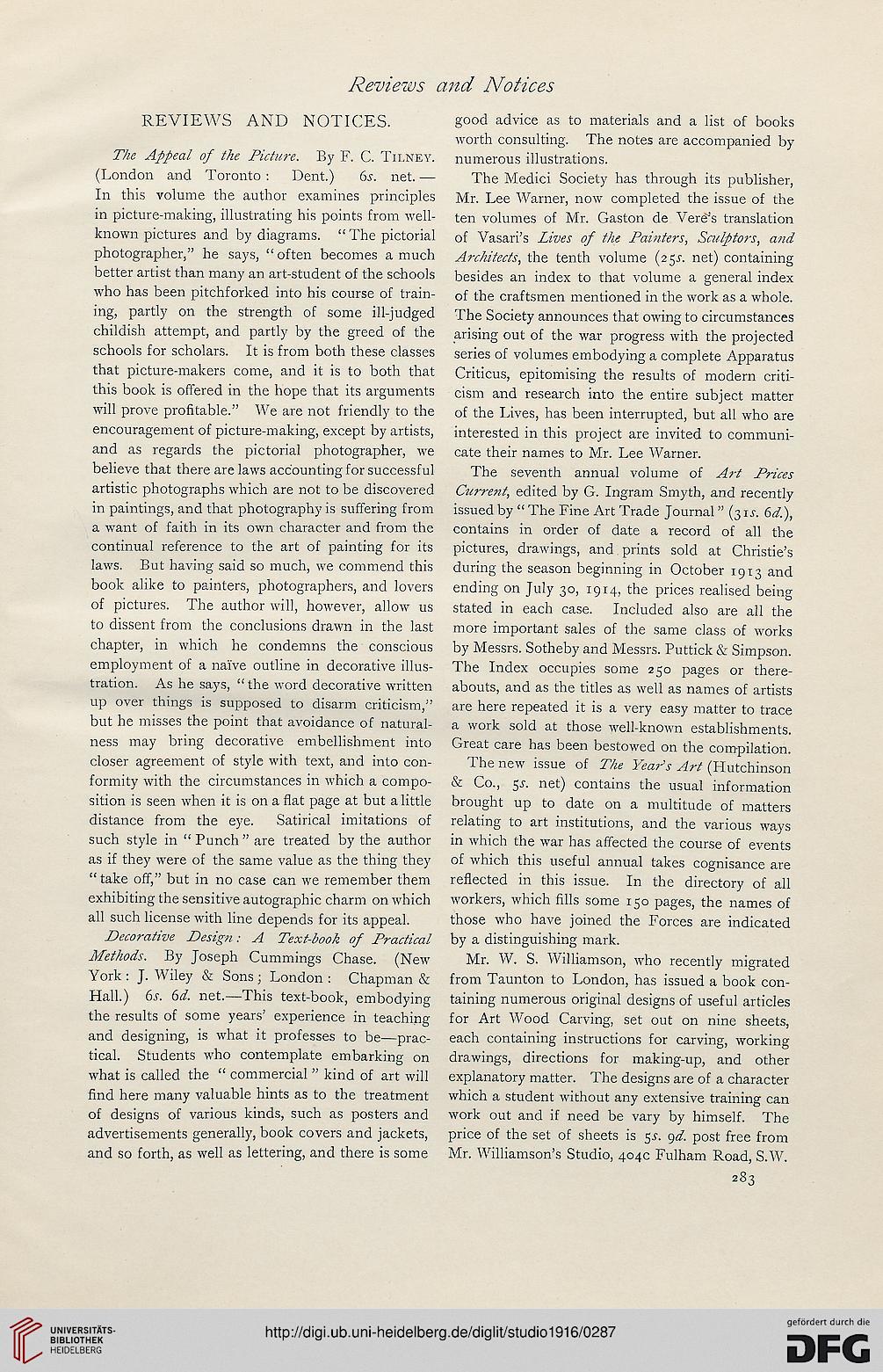 In this volume the author examines principles
in picture-making, illustrating his points from well-
known pictures and by diagrams. “ The pictorial
photographer,” he says, “ often becomes a much
better artist than many an art-student of the schools
who has been pitchforked into his course of train-
ing, partly on the strength of some ill-judged
childish attempt, and partly by the greed of the
schools for scholars. It is from both these classes
that picture-makers come, and it is to both that
this book is offered in the hope that its arguments
will prove profitable.” We are not friendly to the
encouragement of picture-making, except by artists,
and as regards the pictorial photographer, we
believe that there are laws accounting for successful
artistic photographs which are not to be discovered
in paintings, and that photography is suffering from
a want of faith in its own character and from the
continual reference to the art of painting for its
laws. But having said so much, we commend this
book alike to painters, photographers, and lovers
of pictures. The author will, however, allow us
to dissent from the conclusions drawn in the last
chapter, in which he condemns the conscious
employment of a naive outline in decorative illus-
tration. As he says, “ the word decorative written
up over things is supposed to disarm criticism,”
but he misses the point that avoidance of natural-
ness may bring decorative embellishment into
closer agreement of style with text, and into con-
formity with the circumstances in which a compo-
sition is seen when it is on a flat page at but a little
distance from the eye. Satirical imitations of
such style in “ Punch ” are treated by the author
as if they were of the same value as the thing they
“ take off,” but in no case can we remember them
exhibiting the sensitive autographic charm on which
all such license with line depends for its appeal.

Hall.) 6.r. 6d. net.—This text-book, embodying
the results of some years’ experience in teaching
and designing, is what it professes to be—prac-
tical. Students who contemplate embarking on
what is called the “ commercial ” kind of art will
find here many valuable hints as to the treatment
of designs of various kinds, such as posters and
advertisements generally, book covers and jackets,
and so forth, as well as lettering, and there is some

good advice as to materials and a list of books
worth consulting. The notes are accompanied by
numerous illustrations.

The Medici Society has through its publisher,
Mr. Lee AVarner, now completed the issue of the
ten volumes of Mr. Gaston de Vere’s translation
of Vasari’s Lives of the Painters, Sculptors, and
Architects, the tenth volume (255. net) containing
besides an index to that volume a general index
of the craftsmen mentioned in the work as a whole.
The Society announces that owing to circumstances
arising out of the war progress with the projected
series of volumes embodying a complete Apparatus
Criticus, epitomising the results of modern criti-
cism and research into the entire subject matter
of the Lives, has been interrupted, but all who are
interested in this project are invited to communi-
cate their names to Mr. Lee Warner.

The seventh annual volume of Art Prices
Current, edited by G. Ingram Smyth, and recently
issued by “The Fine Art Trade Journal” (31^. 6 d.),
contains in order of date a record of all the
pictures, drawings, and prints sold at Christie’s
during the season beginning in October 1913 and
ending on July 30, 1914, the prices realised being
stated in each case. Included also are all the
more important sales of the same class of works
by Messrs. Sotheby and Messrs. Puttick & Simpson.
The Index occupies some 250 pages or there-
abouts, and as the titles as well as names of artists
are here repeated it is a very easy matter to trace
a work sold at those well-known establishments.
Great care has been bestowed on the compilation.

The new issue of The Year’s Art (Hutchinson
& Co., 5-r. net) contains the usual information
brought up to date on a multitude of matters
relating to art institutions, and the various ways
in which the war has affected the course of events
of which this useful annual takes cognisance are
reflected in this issue. In the directory of all
workers, which fills some 150 pages, the names of
those who have joined the Forces are indicated
by a distinguishing mark.

Mr. W. S. Williamson, who recently migrated
from Taunton to London, has issued a book con-
taining numerous original designs of useful articles
for Art Wood Carving, set out on nine sheets,
each containing instructions for carving, working
drawings, directions for making-up, and other
explanatory matter. The designs are of a character
which a student without any extensive training can
work out and if need be vary by himself. The
price of the set of sheets is 5s. 9d. post free from
Mr. Williamson’s Studio, 404c Fulham Road, S.W.