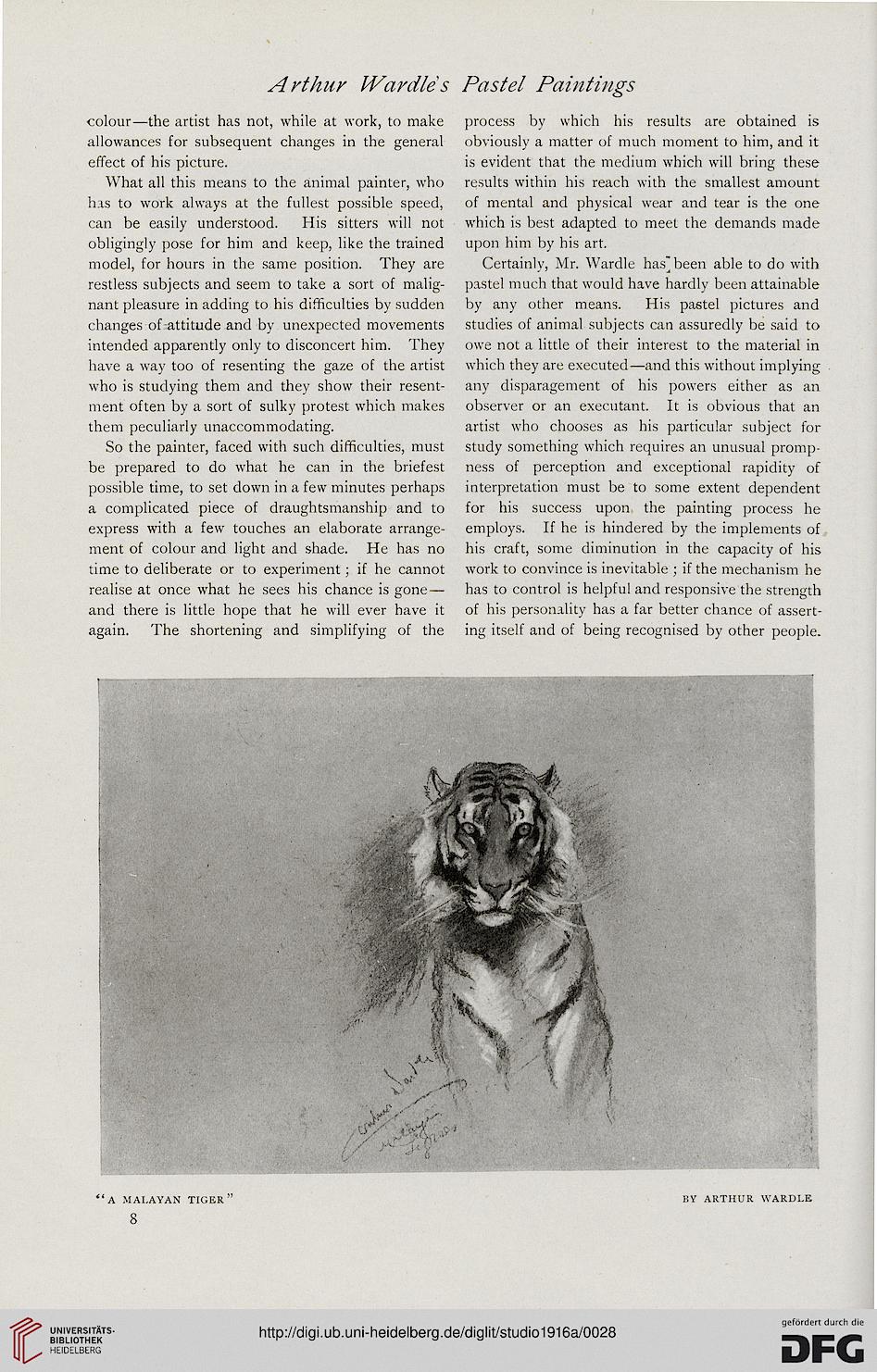 colour—the artist has not, while at work, to make process by which his results are obtained is

allowances for subsequent changes in the general obviously a matter of much moment to him, and it

effect of his picture. is evident that the medium which will bring these

What all this means to the animal painter, who results within his reach with the smallest amount

has to work always at the fullest possible speed, of mental and physical wear and tear is the one

can be easily understood. His sitters will not which is best adapted to meet the demands made

obligingly pose for him and keep, like the trained upon him by his art.

model, for hours in the same position. They are Certainly, Mr. Wardle has] been able to do with
restless subjects and seem to take a sort of malig- pastel much that would have hardly been attainable
nant pleasure in adding to his difficulties by sudden by any other means. His pastel pictures and
changes of-attitude and by unexpected movements studies of animal subjects can assuredly be said to
intended apparently only to disconcert him. They owe not a little of their interest to the material in
have a way too of resenting the gaze of the artist which they are executed—and this without implying
who is studying them and they show their resent- any disparagement of his powers either as an
ment often by a sort of sulky protest which makes observer or an executant. It is obvious that an
them peculiarly unaccommodating. artist who chooses as his particular subject for
So the painter, faced with such difficulties, must study something which requires an unusual promp-
be prepared to do what he can in the briefest ness of perception and exceptional rapidity of
possible time, to set down in a few minutes perhaps interpretation must be to some extent dependent
a complicated piece of draughtsmanship and to for his success upon the painting process he
express with a few touches an elaborate arrange- employs. If he is hindered by the implements of
ment of colour and light and shade. He has no his craft, some diminution in the capacity of his
time to deliberate or to experiment; if he cannot work to convince is inevitable ; if the mechanism he
realise at once what he sees his chance is gone— has to control is helpful and responsive the strength
and there is little hope that he will ever have it of his personality has a far better chance of assert-
again. The shortening and simplifying of the ing itself and of being recognised by other people.

"A MALAYAN TIGER " BY ARTHUR WARDLE