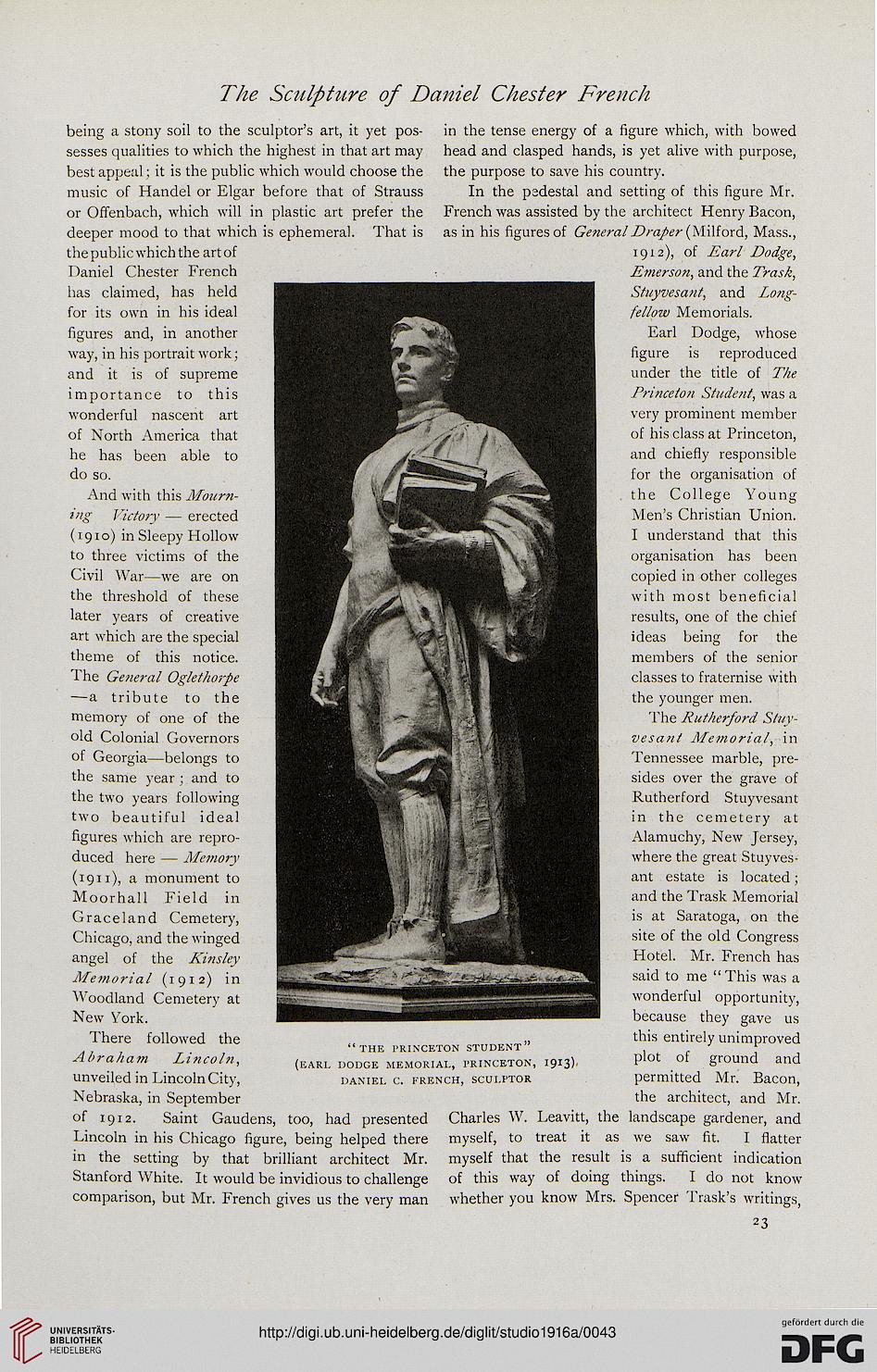 Information about OCR text
The Sculpture of Daniel Chester French

being a stony soil to the sculptor's art, it yet pos- in the tense energy of a figure which, with bowed
sesses qualities to which the highest in that art may head and clasped hands, is yet alive with purpose,
best appeal; it is the public which would choose the the purpose to save his country,
music of Handel or Elgar before that of Strauss In the pedestal and setting of this figure Mr.
or Offenbach, which will in plastic art prefer the French was assisted by the architect Henry Bacon,
deeper mood to that which is ephemeral. That is as in his figures of General ZVa/w (Milford, Mass.,
the public which the art of 1912)) of Earl Dodge,

has claimed, has held I Stityvesant, and Long-

for its own in his ideal HBB| fellow Memorials,

figures and, in another ws" Earl Dodge, whose

way, in his portrait work ; Hp-*MBfl figure is reproduced

importance to this ML fl Princeton Student, was a

he has been able to / ' and chiefly responsible

do so. w jTpSfiBlfc^' ^ lor the organisation oi

And with this Mourn- B vLjflHBlBP^S£ ■ the College Young

to three victims of the HBV'V organisation lias been

Civil War -we are on JnP K IB. copied in other colleges

the threshold of these bf fM with most beneficial

later years of creative BHBBBP*\'™kI * results, one of the chief

theme of this notice. w Br'•' Vm members of the senior

1 he General Oglethorpe JB MM ■ classes to fraternise with

memory of one of the : ^BBM jB- 1 1 Hfll The Rutherford Stuy

tile same and to BBbAbB^BBI ' rBrBBBB sides over the grave
the two years following 8 . ■Rutherford Stuyvesant

Chicago, and the winged 1 Wr'' '^BBBBBBbI site of the old Congress

There followed the „ this entirely unimproved

Nebraska, in September the architect, and Mr.
of 1912. Saint Gaudens, too, had presented Charles W. Leavitt, the landscape gardener, and
Lincoln in his Chicago figure, being helped there myself, to treat it as we saw fit. I flatter

in the setting by that brilliant architect Mr. myself that the result is a sufficient indication

Stanford White. It would be invidious to challenge of this way of doing things. I do not know

comparison, but Mr. French gives us the very man whether you know Mrs. Spencer Trask's writings,