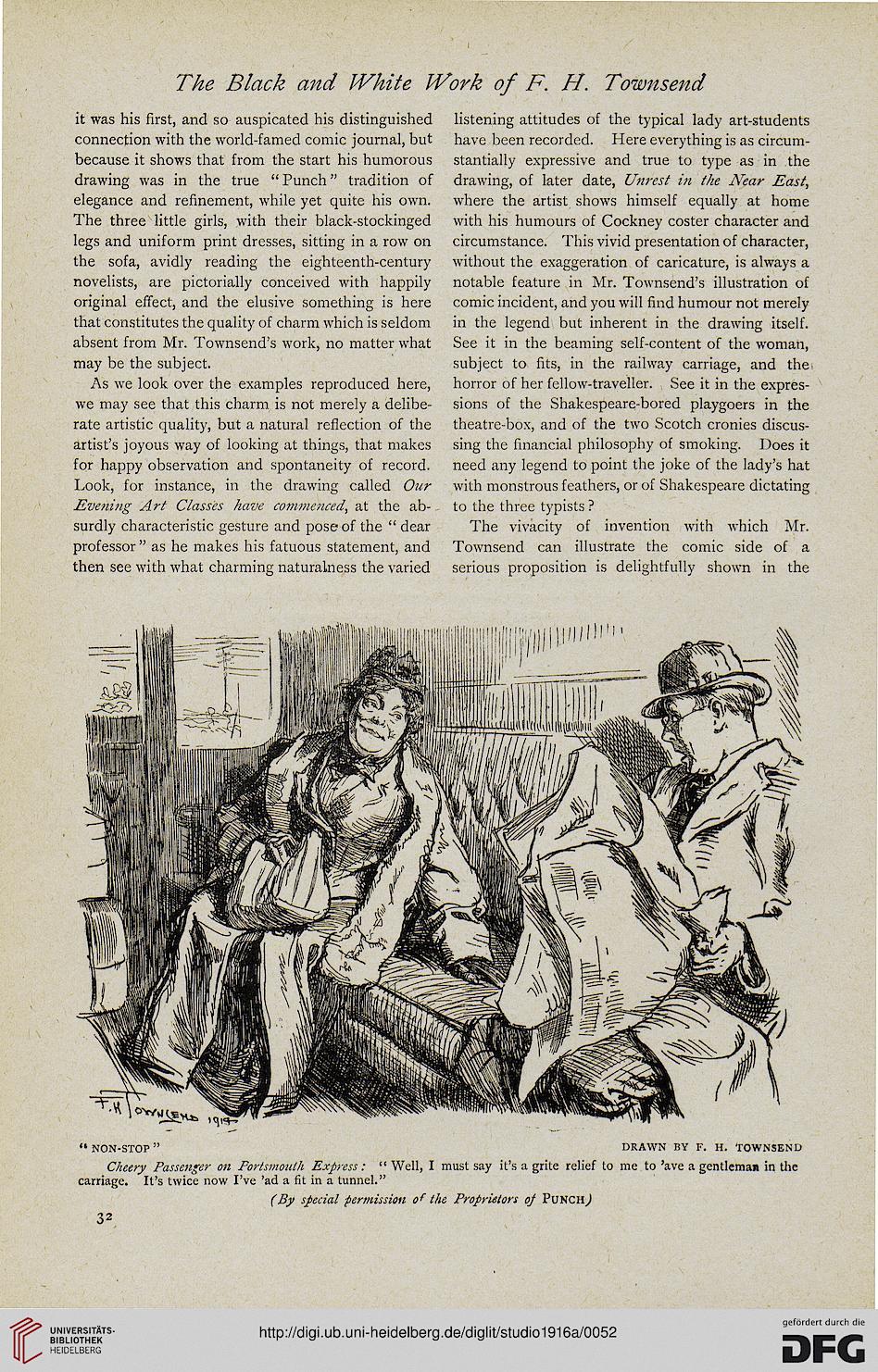 Information about OCR text
The Black and White Work of F. H. Townsend

it was his first, and so auspicated his distinguished
connection with the world-famed comic journal, but
because it shows that from the start his humorous
drawing was in the true " Punch" tradition of
elegance and refinement, while yet quite his own.
The three little girls, with their black-stockinged
legs and uniform print dresses, sitting in a row on
the sofa, avidly reading the eighteenth-century
novelists, are pictorially conceived with happily
original effect, and the elusive something is here
that constitutes the quality of charm which is seldom
absent from Mr. Townsend's work, no matter what
may be the subject.

As we look over the examples reproduced here,
we may see that this charm is not merely a delibe-
rate artistic quality, but a natural reflection of the
artist's joyous way of looking at things, that makes
for happy observation and spontaneity of record.
Look, for instance, in the drawing called Our
Eveni?ig Art Classes have commenced, at the ab-
surdly characteristic gesture and pose of the " dear
professor " as he makes his fatuous statement, and
then see with what charming naturalness the varied

listening attitudes of the typical lady art-students
have been recorded. Here everything is as circum-
stantially expressive and true to type as in the
drawing, of later date, Unrest in the Near East,
where the artist shows himself equally at home
with his humours of Cockney coster character and
circumstance. This vivid presentation of character,
without the exaggeration of caricature, is always a
notable feature in Mr. Townsend's illustration of
comic incident, and you will find humour not merely
in the legend but inherent in the drawing itself.
See it in the beaming self-content of the woman,
subject to fits, in the railway carriage, and the-
horror of her fellow-traveller. See it in the expres-
sions of the Shakespeare-bored playgoers in the
theatre-box, and of the two Scotch cronies discus-
sing the financial philosophy of smoking. Does it
need any legend to point the joke of the lady's hat
with monstrous feathers, or of Shakespeare dictating
to the three typists ?

The vivacity of invention with which Mr.
Townsend can illustrate the comic side of a
serious proposition is delightfully shown in the