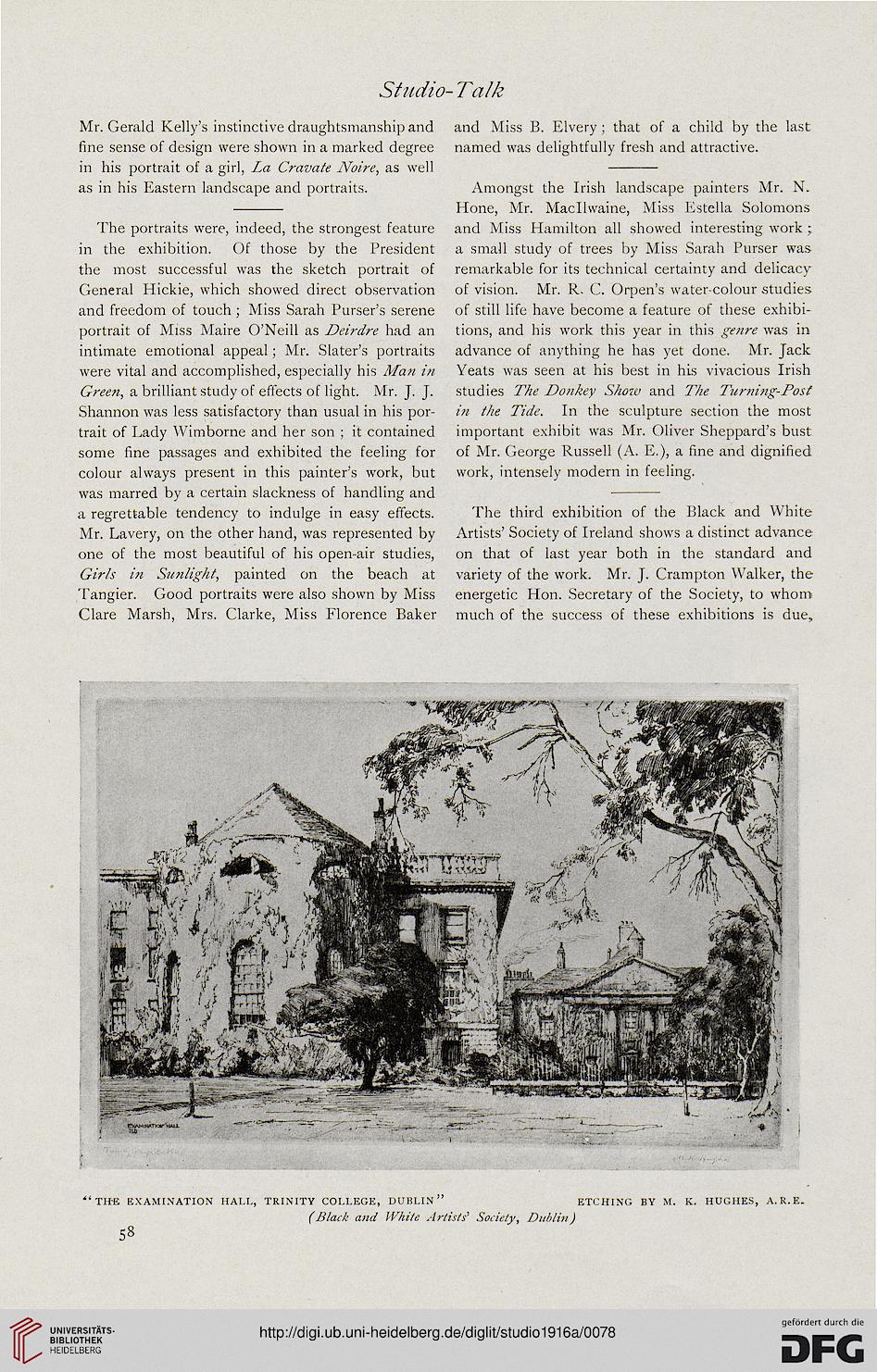 Mr. Gerald Kelly's instinctive draughtsmanship and
fine sense of design were shown in a marked degree
in his portrait of a girl, La Cravate Noire, as well
as in his Eastern landscape and portraits.

The portraits were, indeed, the strongest feature
in the exhibition. Of those by the President
the most successful was the sketch portrait of
General Hickie, which showed direct observation
and freedom of touch; Miss Sarah Purser's serene
portrait of Miss Maire O'Neill as Deirdre had an
intimate emotional appeal; Mr. Slater's portraits
were vital and accomplished, especially his Man in
Green, a brilliant study of effects of light. Mr. J. J.
Shannon was less satisfactory than usual in his por-
trait of Lady Wimborne and her son ; it contained
some fine passages and exhibited the feeling for
colour always present in this painter's work, but
was marred by a certain slackness of handling and
a regrettable tendency to indulge in easy effects.
Mr. Lavery, on the other hand, was represented by
one of the most beautiful of his open-air studies,
Girls in Sunlight, painted on the beach at
Tangier. Good portraits were also shown by Miss
Clare Marsh, Mrs. Clarke, Miss Florence Baker

and Miss B. Elvery; that of a child by the last
named was delightfully fresh and attractive.

Amongst the Irish landscape painters Mr. N.
Hone, Mr. Macllwaine, Miss Estella Solomons
and Miss Hamilton all showed interesting work ;
a small study of trees by Miss Sarah Purser was
remarkable for its technical certainty and delicacy
of vision. Mr. R. C. Orpen's water-colour studies
of still life have become a feature of these exhibi-
tions, and his work this year in this genre was in
advance of anything he has yet done. Mr. Jack
Yeats was seen at his best in his vivacious Irish
studies The Donkey Show and The Turning-Post
in the Tide. In the sculpture section the most
important exhibit was Mr. Oliver Sheppard's bust
of Mr. George Russell (A. E.), a fine and dignified
work, intensely modern in feeling.

The third exhibition of the Black and White
Artists' Society of Ireland shows a distinct advance
on that of last year both in the standard and
variety of the work. Mr. J. Crampton Walker, the
energetic Hon. Secretary of the Society, to whom
much of the success of these exhibitions is due,