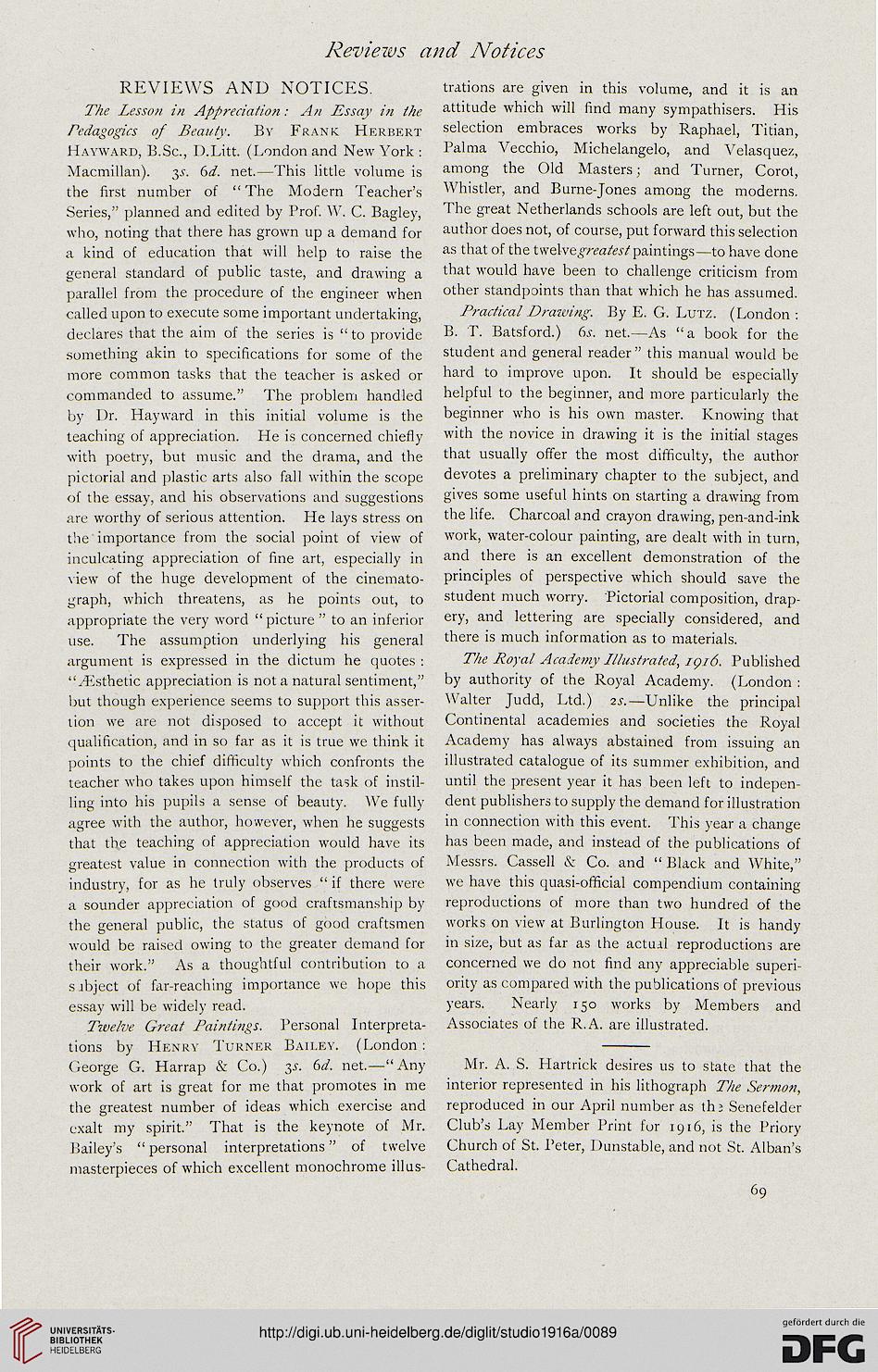 The Lesson in Appreciation : An Essay in the
Pedagogics of Beauty. By Frank Herbert
Hayward, B.Sc, D.Litt. (London and New York :
Macmillan). 3.c 6d. net.—This little volume is
the first number of " The Modern Teacher's
Series," planned and edited by Prof. W. C. Bagley,
who, noting that there has grown up a demand for
a kind of education that will help to raise the
general standard of public taste, and drawing a
parallel from the procedure of the engineer when
called upon to execute some important undertaking,
declares that the aim of the series is "to provide
something akin to specifications for some of the
more common tasks that the teacher is asked or
commanded to assume." The problem handled
by Dr. Hayward in this initial volume is the
teaching of appreciation. He is concerned chiefly
with poetry, but music and the drama, and the
pictorial and plastic arts also fall within the scope
of the essay, and his observations and suggestions
are worthy of serious attention. He lays stress on
the importance from the social point of view of
inculcating appreciation of fine art, especially in
view of the huge development of the cinemato-
graph, which threatens, as he points out, to
appropriate the very word " picture " to an inferior
use. The assumption underlying his general
argument is expressed in the dictum he quotes :
"^Esthetic appreciation is not a natural sentiment,"
but though experience seems to support this asser-
tion we are not disposed to accept it without
qualification, and in so far as it is true we think it
points to the chief difficulty which confronts the
teacher who takes upon himself the task of instil-
ling into his pupils a sense of beauty. We fully
agree with the author, however, when he suggests
that the teaching of appreciation would have its
greatest value in connection with the products of
industry, for as he truly observes " if there were
a sounder appreciation of good craftsmanship by
the general public, the status of good craftsmen
would be raised owing to the greater demand for
their work." As a thoughtful contribution to a
Sibject of far-reaching importance we hope this
essay will be widely read.

Twelve Great Paintings. Personal Interpreta-
tions by Henry Turner Bailey. (London:
George G. Harrap & Co.) 3J. 6d. net.—"Any
work of art is great for me that promotes in me
the greatest number of ideas which exercise and
exalt my spirit." That is the keynote of Mr.
Bailey's " personal interpretations" of twelve
masterpieces of which excellent monochrome illus-

trations are given in this volume, and it is an
attitude which will find many sympathisers. His
selection embraces works by Raphael, Titian,
Palma Vecchio, Michelangelo, and Velasquez,
among the Old Masters; and Turner, Corot,
Whistler, and Burne-Jones among the moderns.
The great Netherlands schools are left out, but the
author does not, of course, put forward this selection
as that of the twelvegreatest paintings—to have done
that would have been to challenge criticism from
other standpoints than that which he has assumed.

Practical Draiving. By E. G. Lutz. (London :
B. T. Batsford.) 6s. net.—As "a book for the
student and general reader " this manual would be
hard to improve upon. It should be especially
helpful to the beginner, and more particularly the
beginner who is his own master. Knowing that
with the novice in drawing it is the initial stages
that usually offer the most difficulty, the author
devotes a preliminary chapter to the subject, and
gives some useful hints on starting a drawing from
the life. Charcoal and crayon drawing, pen-and-ink
work, water-colour painting, are dealt with in turn,
and there is an excellent demonstration of the
principles of perspective which should save the
student much worry. Pictorial composition, drap-
ery, and lettering are specially considered, and
there is much information as to materials.

The Royal Academy Illustrated, iqi6. Published
by authority of the Royal Academy. (London :
Walter Judd, Ltd.) 2s.— Unlike the principal
Continental academies and societies the Royal
Academy has always abstained from issuing an
illustrated catalogue of its summer exhibition, and
until the present year it has been left to indepen-
dent publishers to supply the demand for illustration
in connection with this event. This year a change
has been made, and instead of the publications of
Messrs. Cassell & Co. and " Black and White,"
we have this quasi-official compendium containing
reproductions of more than two hundred of the
works on view at Burlington House. It is handy
in si/.e, but as far as the actual reproductions are
concerned we do not find any appreciable superi-
ority as compared with the publications of previous
years. Nearly 150 works by Members and
Associates of the R.A. are illustrated.

Mr. A. S. Hartrick desires us to state that the
interior represented in his lithograph The Sermon,
reproduced in our April number as th 3 Senefelder
Club's Lay Member Print lor 1916, is the Priory
Church of St. Peter, Dunstable, and not St. Alban's
Cathedral.