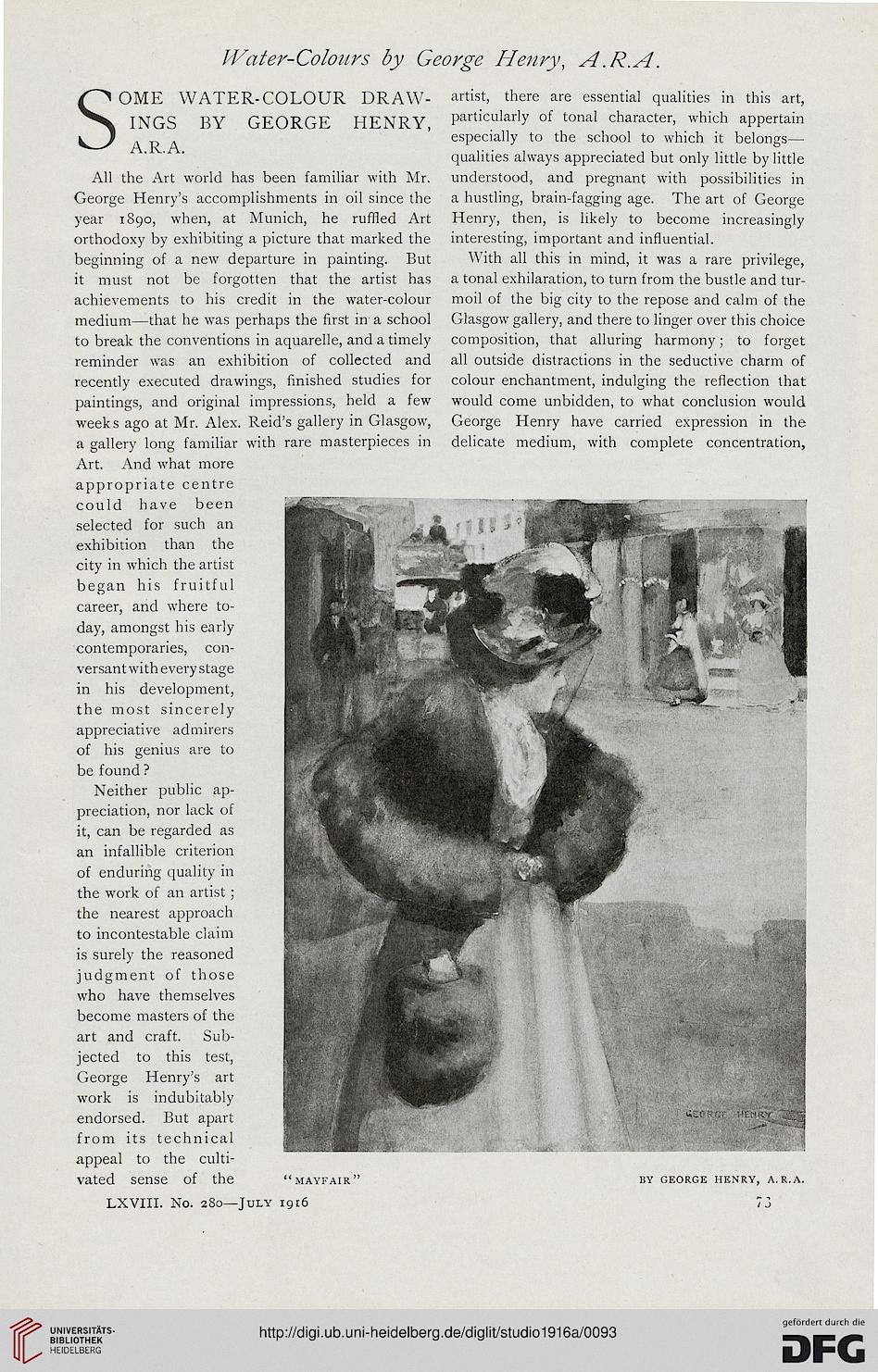 SOME WATER-COLOUR DRAW- artist, there are essential qualities in this art,
INGS BY GEORGE HENRY, particularly of tonal character, which appertain
^ ^ ' especially to the school to which it belongs—

qualities always appreciated but only little by little
All the Art world has been familiar with Mr. understood, and pregnant with possibilities in
George Henry's accomplishments in oil since the a hustling, brain-fagging age. The art of George
year 1890, when, at Munich, he ruffled Art Henry, then, is likely to become increasingly
orthodoxy by exhibiting a picture that marked the interesting, important and influential,
beginning of a new departure in painting. But With all this in mind, it was a rare privilege,
it must not be forgotten that the artist has a tonal exhilaration, to turn from the bustle and tur-
achievements to his credit in the water-colour moil of the big city to the repose and calm of the
medium—that he was perhaps the first in a school Glasgow gallery, and there to linger over this choice
to break the conventions in aquarelle, and a timely composition, that alluring harmony ; to forget
reminder was an exhibition of collected and all outside distractions in the seductive charm of
recently executed drawings, finished studies for colour enchantment, indulging the reflection that
paintings, and original impressions, held a few would come unbidden, to what conclusion would
weeks ago at Mr. Alex. Reid's gallery in Glasgow, George Henry have carried expression in the
a gallery long familiar with rare masterpieces in delicate medium, with complete concentration,
Art. And what more
appropriate centre
could have been
selected for such an
exhibition than the
city in which the artist
began his fruitful
career, and where to-
day, amongst his early
contemporaries, con-
versant with every stage
in his development,
the most sincerely
appreciative admirers
of his genius are to
be found ?

Neither public ap-
preciation, nor lack of
it, can be regarded as
an infallible criterion
of enduring quality in
the work of an artist;
the nearest approach
to incontestable claim
is surely the reasoned
judgment of those
who have themselves
become masters of the
art and craft. Sub-
jected to this test,
George Henry's art
work is indubitably
endorsed. But apart
from its technical
appeal to the culti-
vated sense of the "mayfair" by george henry, a.r.a.
LXVIII. No. 280—July 1916 7 j