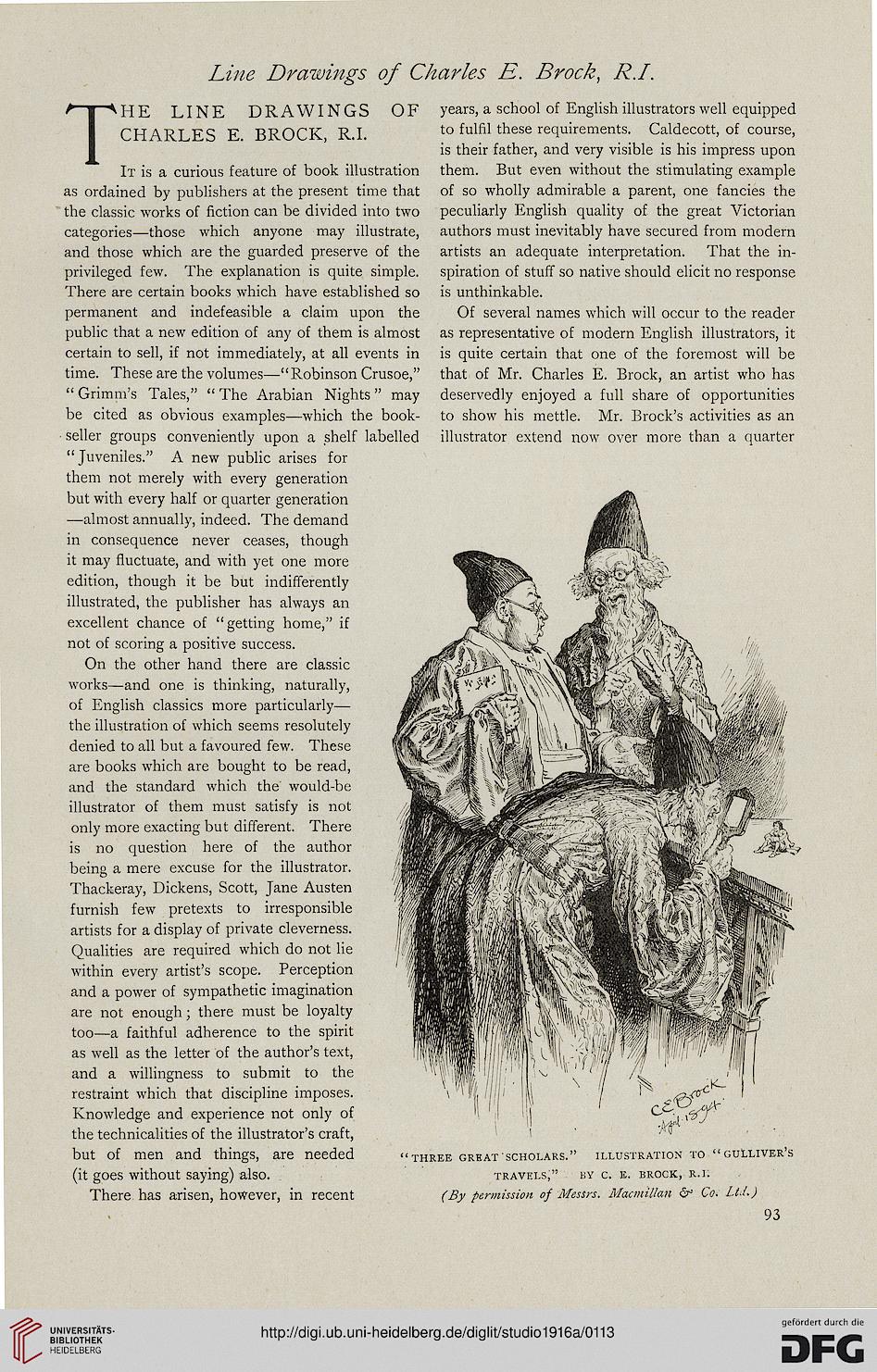 is their father, and very visible is his impress upon
It is a curious feature of book illustration them. But even without the stimulating example
as ordained by publishers at the present time that of so wholly admirable a parent, one fancies the
the classic works of fiction can be divided into two peculiarly English quality of the great Victorian
categories—those which anyone may illustrate, authors must inevitably have secured from modern
and those which are the guarded preserve of the artists an adequate interpretation. That the in-
privileged few. The explanation is quite simple, spiration of stuff so native should elicit no response
There are certain books which have established so is unthinkable.

permanent and indefeasible a claim upon the Of several names which will occur to the reader
public that a new edition of any of them is almost as representative of modern English illustrators, it
certain to sell, if not immediately, at all events in is quite certain that one of the foremost will be
time. These are the volumes—"Robinson Crusoe," that of Mr. Charles E. Brock, an artist who has
" Grimm's Tales," " The Arabian Nights " may deservedly enjoyed a full share of opportunities
be cited as obvious examples—which the book- to show his mettle. Mr. Brock's activities as an
seller groups conveniently upon a shelf labelled illustrator extend now over more than a quarter
"Juveniles." A new public arises for
them not merely with every generation
but with every half or quarter generation
—almost annually, indeed. The demand
in consequence never ceases, though
it may fluctuate, and with yet one more
edition, though it be but indifferently
illustrated, the publisher has always an
excellent chance of " getting home," if
not of scoring a positive success.

On the other hand there are classic
works—and one is thinking, naturally,
of English classics more particularly—
the illustration of which seems resolutely
denied to all but a favoured few. These
are books which are bought to be read,
and the standard which the would-be
illustrator of them must satisfy is not

only more exacting but different. There

is no question here of the author

being a mere excuse for the illustrator.

artists for a display of private cleverness.

Qualities are required which do not lie

within every artist's scope. Perception

and a power of sympathetic imagination

are not enough; there must be loyalty

too—a faithful adherence to the spirit

as well as the letter of the author's text,

and a willingness to submit to the

restraint which that discipline imposes.

Knowledge and experience not only of

the technicalities of the illustrator's craft,

but of men and things, are needed "three great scholars." illustration to " gulliver's

There has arisen, however, in recent (By permission of Messrs. MacmlUan & Co. It.!.)