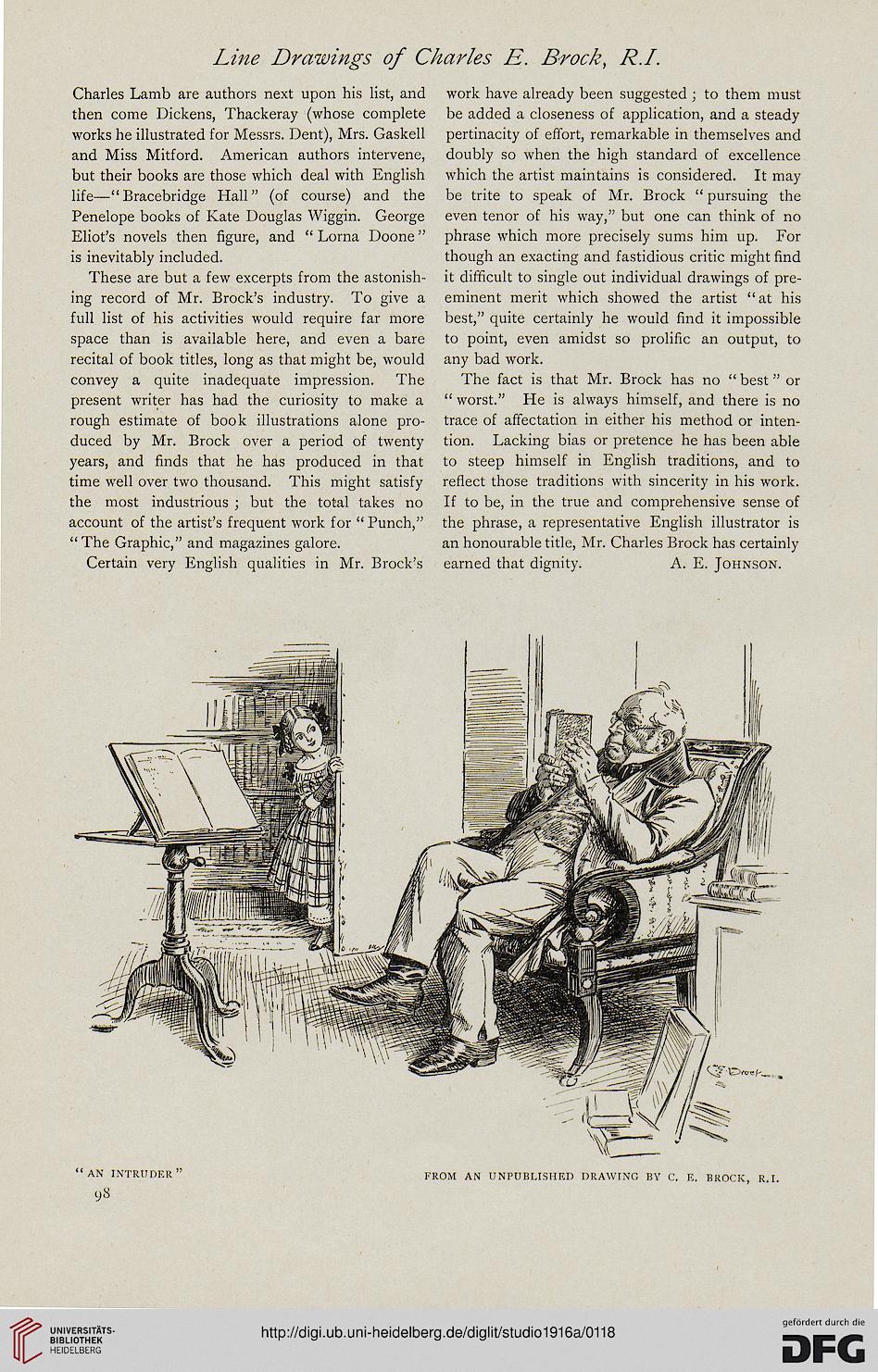 Charles Lamb are authors next upon his list, and
then come Dickens, Thackeray (whose complete
works he illustrated for Messrs. Dent), Mrs. Gaskell
and Miss Mitford. American authors intervene,
but their books are those which deal with English
life—"Bracebridge Hall" (of course) and the
Penelope books of Kate Douglas Wiggin. George
Eliot's novels then figure, and " Lorna Doone"
is inevitably included.

These are but a few excerpts from the astonish-
ing record of Mr. Brock's industry. To give a
full list of his activities would require far more
space than is available here, and even a bare
recital of book titles, long as that might be, would
convey a quite inadequate impression. The
present writer has had the curiosity to make a
rough estimate of book illustrations alone pro-
duced by Mr. Brock over a period of twenty
years, and finds that he has produced in that
time well over two thousand. This might satisfy
the most industrious ; but the total takes no
account of the artist's frequent work for " Punch,"
"The Graphic," and magazines galore.

work have already been suggested ; to them must
be added a closeness of application, and a steady
pertinacity of effort, remarkable in themselves and
doubly so when the high standard of excellence
which the artist maintains is considered. It may
be trite to speak of Mr. Brock " pursuing the
even tenor of his way," but one can think of no
phrase which more precisely sums him up. For
though an exacting and fastidious critic might find
it difficult to single out individual drawings of pre-
eminent merit which showed the artist "at his
best," quite certainly he would find it impossible
to point, even amidst so prolific an output, to
any bad work.

The fact is that Mr. Brock has no " best " or
" worst." He is always himself, and there is no
trace of affectation in either his method or inten-
tion. Lacking bias or pretence he has been able
to steep himself in English traditions, and to
reflect those traditions with sincerity in his work.
If to be, in the true and comprehensive sense of
the phrase, a representative English illustrator is
an honourable title, Mr. Charles Brock has certainly
earned that dignity. A. E. Johnson.