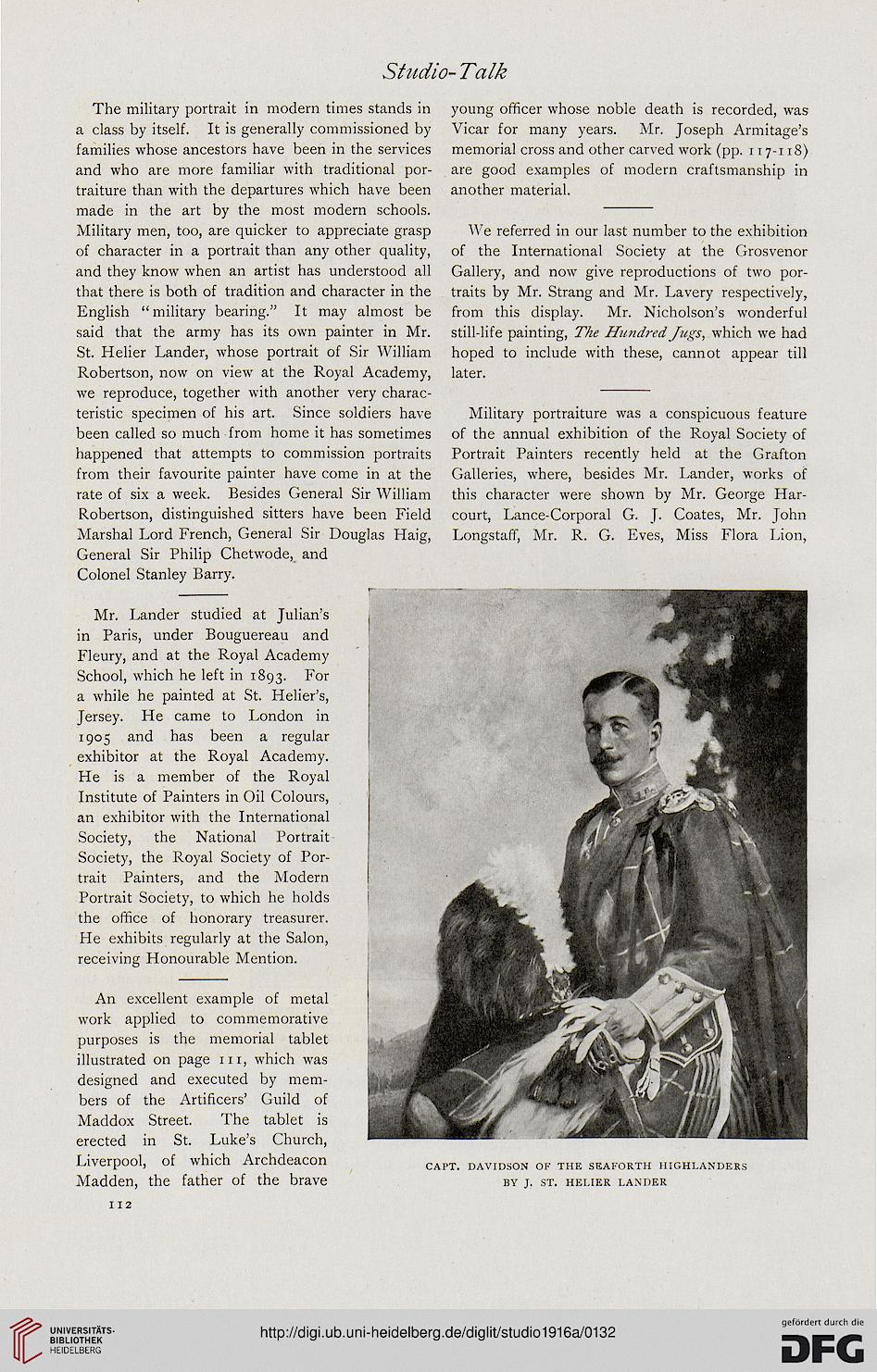 The military portrait in modern times stands in young officer whose noble death is recorded, was

a class by itself. It is generally commissioned by Vicar for many years. Mr. Joseph Armitage's

families whose ancestors have been in the services memorial cross and other carved work (pp. 117-118)

traiture than with the departures which have been another material,

made in the art by the most modern schools. -

Military men, too, are quicker to appreciate grasp We referred in our last number to the exhibition

of character in a portrait than any other quality, of the International Society at the Grosvenor

and they know when an artist has understood all Gallery, and now give reproductions of two por-

that there is both of tradition and character in the traits by Mr. Strang and Mr. Lavery respectively,

English "military bearing." It may almost be from this display. Mr. Nicholson's wonderful

said that the army has its own painter in Mr. still-life painting, The Hundred Jugs, which we had

St. Helier Lander, whose portrait of Sir William hoped to include with these, cannot appear till

Robertson, now on view at the Royal Academy, later,
we reproduce, together with another very charac-

teristic specimen of his art. Since soldiers have Military portraiture was a conspicuous feature

from their favourite painter have come in at the Galleries, where, besides Mr. Lander, works of

rate of six a week. Besides General Sir William this character were shown by Mr. George Har-

Mr. Lander studied at Julian's
in Paris, under Bouguereau and
Fleury, and at the Royal Academy
School, which he left in 1893. For
a while he painted at St. Helier's,
Jersey. He came to London in
1905 and has been a regular
exhibitor at the Royal Academy.
He is a member of the Royal
Institute of Painters in Oil Colours,
an exhibitor with the International
Society, the National Portrait
Society, the Royal Society of Por-
trait Painters, and the Modern
Portrait Society, to which he holds
the office of honorary treasurer.
He exhibits regularly at the Salon,
receiving Honourable Mention.

An excellent example of metal
work applied to commemorative
purposes is the memorial tablet
illustrated on page in, which was
designed and executed by mem-
bers of the Artificers' Guild of
Maddox Street. The tablet is
erected in St. Luke's Church,
Liverpool, of which Archdeacon capt. davidson of the sbaforth Highlanders

Madden, the father of the brave by j. st. helier lander