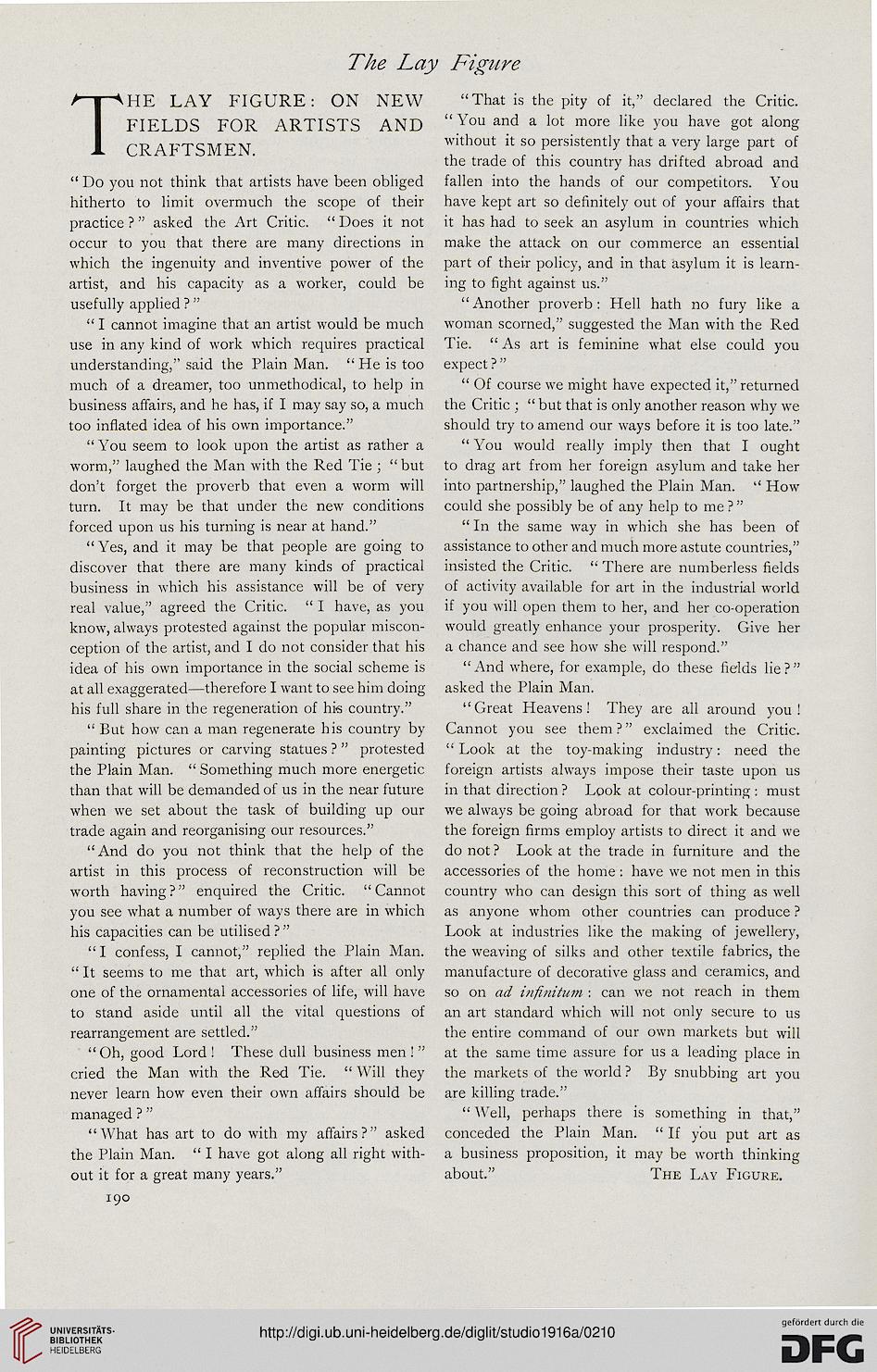 THE LAY FIGURE: ON NEW
FIELDS FOR ARTISTS AND
CRAFTSMEN.

" Do you not think that artists have been obliged
hitherto to limit overmuch the scope of their
practice ? " asked the Art Critic. " Does it not
occur to you that there are many directions in
which the ingenuity and inventive power of the
artist, and his capacity as a worker, could be
usefully applied ? "

" I cannot imagine that an artist would be much
use in any kind of work which requires practical
understanding," said the Plain Man. " He is too
much of a dreamer, too unmethodical, to help in
business affairs, and he has, if I may say so, a much
too inflated idea of his own importance."

" You seem to look upon the artist as rather a
worm," laughed the Man with the Red Tie ; "but
don't forget the proverb that even a worm will
turn. It may be that under the new conditions
forced upon us his turning is near at hand."

"Yes, and it may be that people are going to
discover that there are many kinds of practical
business in which his assistance will be of very
real value," agreed the Critic. " I have, as you
know, always protested against the popular miscon-
ception of the artist, and I do not consider that his
idea of his own importance in the social scheme is
at all exaggerated—therefore I want to see him doing
his full share in the regeneration of his country."

" But how can a man regenerate his country by
painting pictures or carving statues ?" protested
the Plain Man. " Something much more energetic
than that will be demanded of us in the near future
when we set about the task of building up our
trade again and reorganising our resources."

" And do you not think that the help of the
artist in this process of reconstruction will be
worth having ?" enquired the Critic. " Cannot
you see what a number of ways there are in which
his capacities can be utilised ? "

" I confess, I cannot," replied the Plain Man.
" It seems to me that art, which is after all only
one of the ornamental accessories of life, will have
to stand aside until all the vital questions of
rearrangement are settled."

" Oh, good Lord ! These dull business men ! "
cried the Man with the Red Tie. " Will they
never learn how even their own affairs should be
managed ? "

"That is the pity of it," declared the Critic.
" You and a lot more like you have got along
without it so persistently that a very large part of
the trade of this country has drifted abroad and
fallen into the hands of our competitors. You
have kept art so definitely out of your affairs that
it has had to seek an asylum in countries which
make the attack on our commerce an essential
part of their policy, and in that asylum it is learn-
ing to fight against us."

" Another proverb: Hell hath no fury like a
woman scorned," suggested the Man with the Red
Tie. " As art is feminine what else could you
expect ?"

" Of course we might have expected it," returned
the Critic ; " but that is only another reason why we
should try to amend our ways before it is too late."

" You would really imply then that I ought
to drag art from her foreign asylum and take her
into partnership," laughed the Plain Man. " How
could she possibly be of any help to me ? "

" In the same way in which she has been of
assistance to other and much more astute countries,"
insisted the Critic. " There are numberless fields
of activity available for art in the industrial world
if you will open them to her, and her co-operation
would greatly enhance your prosperity. Give her
a chance and see how she will respond."

" And where, for example, do these fields lie ? "
asked the Plain Man.

"Great Heavens! They are all around you!
Cannot you see them?" exclaimed the Critic.
" Look at the toy-making industry: need the
foreign artists always impose their taste upon us
in that direction ? Look at colour-printing : must
we always be going abroad for that work because
the foreign firms employ artists to direct it and we
do not ? Look at the trade in furniture and the
accessories of the home : have we not men in this
country who can design this sort of thing as well
as anyone whom other countries can produce ?
Look at industries like the making of jewellery,
the weaving of silks and other textile fabrics, the
manufacture of decorative glass and ceramics, and
so on ad infinitum : can we not reach in them
an art standard which will not only secure to us
the entire command of our own markets but will
at the same time assure for us a leading place in
the markets of the world ? By snubbing art you
are killing trade."

" Well, perhaps there is something in that,"
conceded the Plain Man. " If you put art as
a business proposition, it may be worth thinking
about." The Lay Figure.