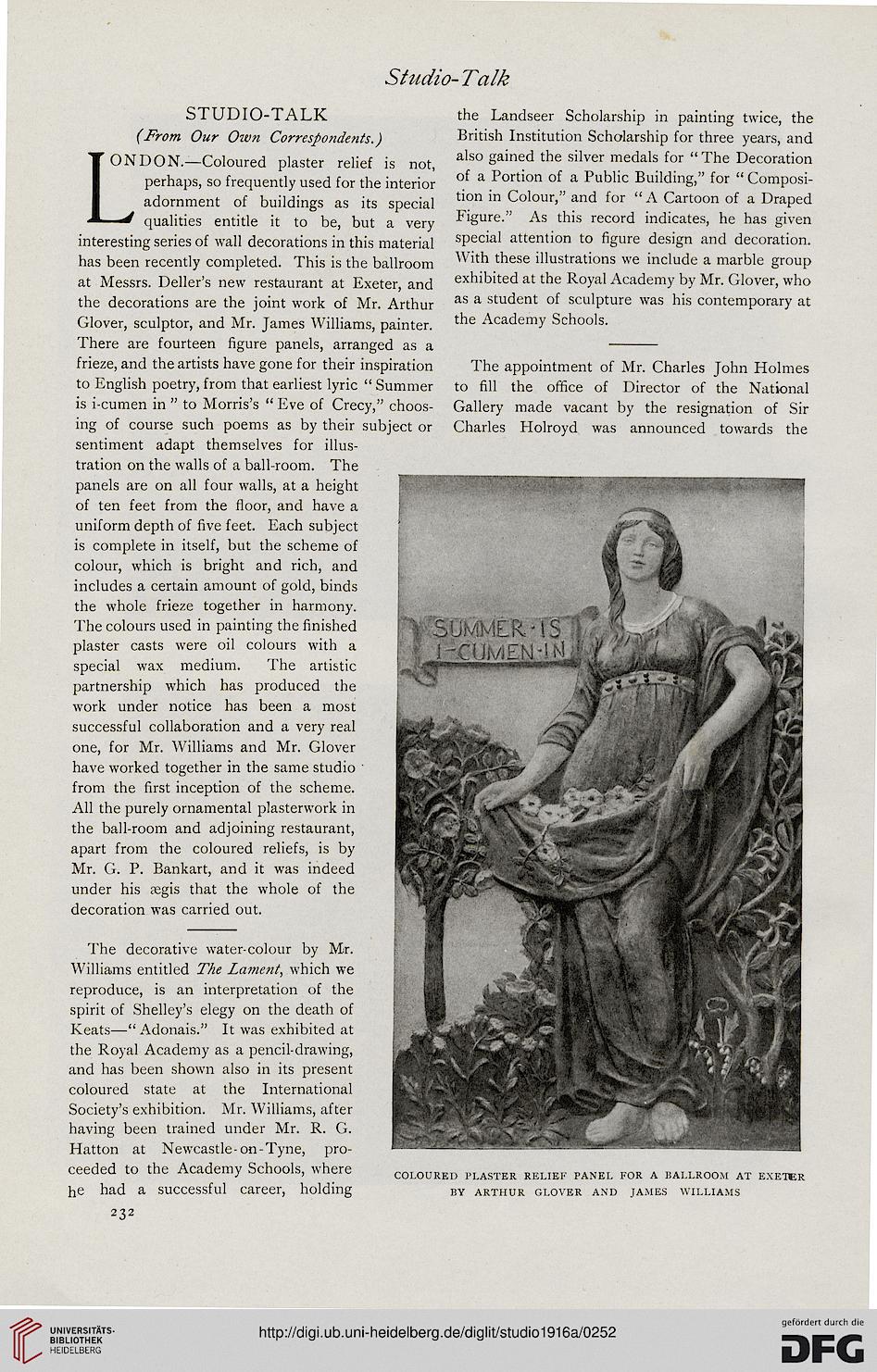 STUDIO-TALK the Landseer Scholarship in painting twice, the

(From Our Own Correspondents.) British Institution Scholarship for three years, and

C'DON.—Coloured plaster relief is not, also Sained the silver medals for " The Decoration

perhaps, so frequently used for the interior of a Portlon of a Public Building," for " Composi-

adornment of buildings as its special tion in Colour," and for "A Cartoon of a Draped

qualities entitle it to be, but a very Flgure-" As this record indicates, he has given

interesting series of wall decorations in this material sPecial attention to figure design and decoration,

has been recently completed. This is the ballroom With these "lustrations we include a marble group

at Messrs. Deller's new restaurant at Exeter, and exhibited at the Royal Academy by Mr. Glover, who

the decorations are the joint work of Mr. Arthur as a student of sculpture was his contemporary at

There are fourteen figure panels, arranged as a -

frieze, and the artists have gone for their inspiration The appointment of Mr. Charles John Holmes
to English poetry, from that earliest lyric " Summer to fill the office of Director of the National
is i-cumen in " to Morris's " Eve of Crecy," choos- Gallery made vacant by the resignation of Sir
ing of course such poems as by their subject or Charles Holroyd was announced towards the
sentiment adapt themselves for illus-
tration on the walls of a ball-room. The
panels are on all four walls, at a height
of ten feet from the floor, and have a
uniform depth of five feet. Each subject
is complete in itself, but the scheme of
colour, which is bright and rich, and
includes a certain amount of gold, binds
the whole frieze together in harmony.
The colours used in painting the finished
plaster casts were oil colours with a
special wax medium. The artistic
partnership which has produced the
work under notice has been a most
successful collaboration and a very real
one, for Mr. Williams and Mr. Glover
have worked together in the same studio
from the first inception of the scheme.
All the purely ornamental plasterwork in
the ball-room and adjoining restaurant,
apart from the coloured reliefs, is by
Mr. G. P. Bankart, and it was indeed
under his regis that the whole of the
decoration was carried out.

The decorative water-colour by Mr.
Williams entitled The Lament, which we
reproduce, is an interpretation of the
spirit of Shelley's elegy on the death of
Keats—" Adonais." It was exhibited at
the Royal Academy as a pencil-drawing,
and has been shown also in its present
coloured state at the International
Society's exhibition. Mr. Williams, after
having been trained under Mr. R. G.
Hatton at Newcastle-on-Tyne, pro-
ceeded to the Academy Schools, where coloured plaster relief panel for a ballroom at exeter
he had a successful career, holding by Arthur glover and james williams