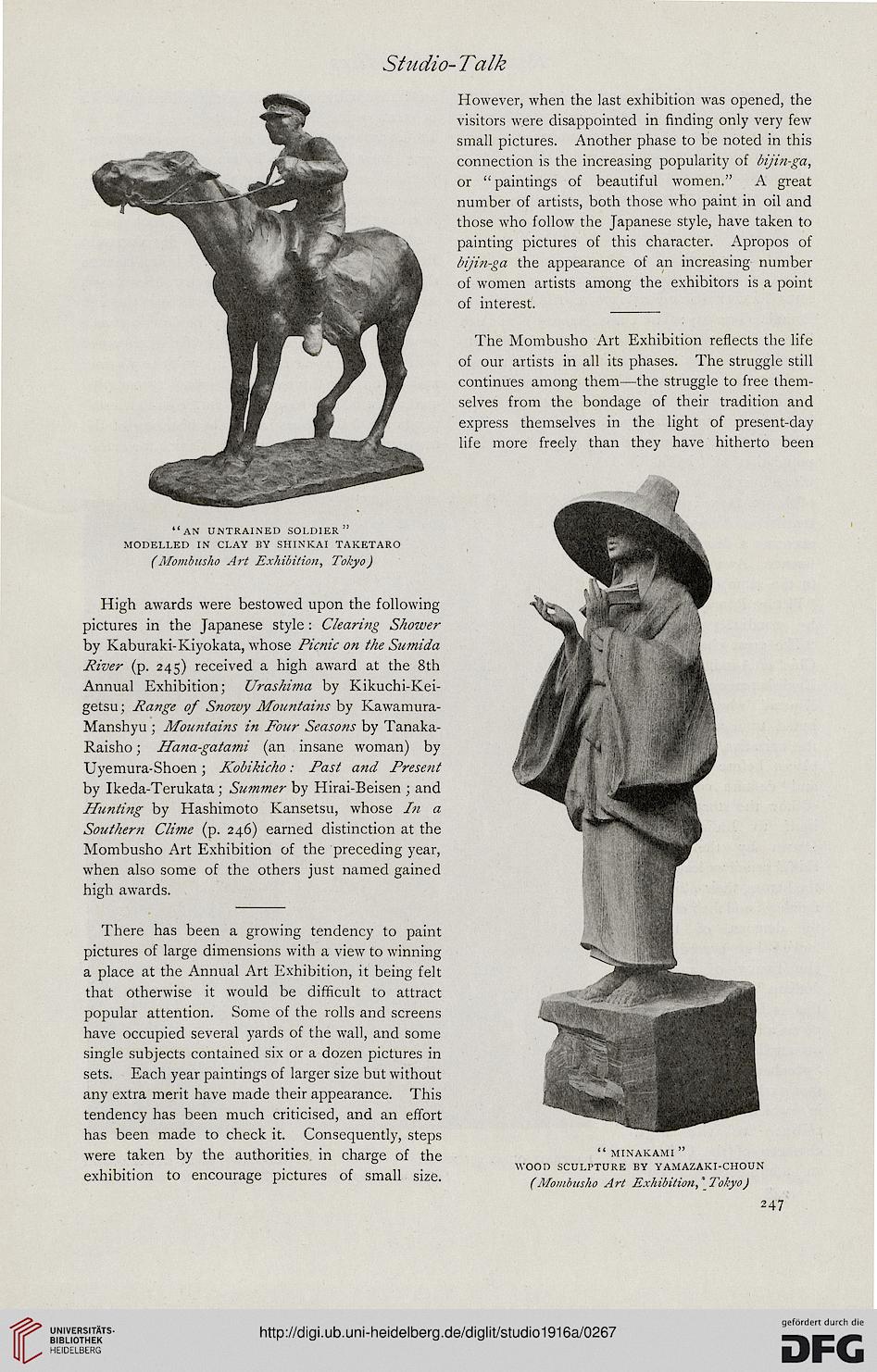 High awards were bestowed upon the following
pictures in the Japanese style : Clearing Shower
by Kaburaki-Kiyokata, whose Picnic on the Sumida
River (p. 245) received a high award at the 8th
Annual Exhibition; Urashima by Kikuchi-Kei-
getsu; Range of Snowy Mountains by Kawamura-
Manshyu ; Mountains in Four Seasons by Tanaka-
Raisho; Hana-gatami (an insane woman) by
Uyemura-Shoen; Kobikicho: Past and Present
by Ikeda-Terukata ; Summer by Hirai-Beisen ; and
Hunting by Hashimoto Kansetsu, whose In a
Southern Clime (p. 246) earned distinction at the
Mombusho Art Exhibition of the preceding year,
when also some of the others just named gained
high awards.

There has been a growing tendency to paint
pictures of large dimensions with a view to winning
a place at the Annual Art Exhibition, it being felt
that otherwise it would be difficult to attract
popular attention. Some of the rolls and screens
have occupied several yards of the wall, and some
single subjects contained six or a dozen pictures in
sets. Each year paintings of larger size but without
any extra merit have made their appearance. This
tendency has been much criticised, and an effort
has been made to check it. Consequently, steps
were taken by the authorities in charge of the
exhibition to encourage pictures of small size.

However, when the last exhibition was opened, the
visitors were disappointed in finding only very few
small pictures. Another phase to be noted in this
connection is the increasing popularity of bijin-ga,
or "paintings of beautiful women." A great
number of artists, both those who paint in oil and
those who follow the Japanese style, have taken to
painting pictures of this character. Apropos of
bijin-ga the appearance of an increasing number
of women artists among the exhibitors is a point
of interest.

The Mombusho Art Exhibition reflects the life
of our artists in all its phases. The struggle still
continues among them—the struggle to free them-
selves from the bondage of their tradition and
express themselves in the light of present-day
life more freely than they have hitherto been