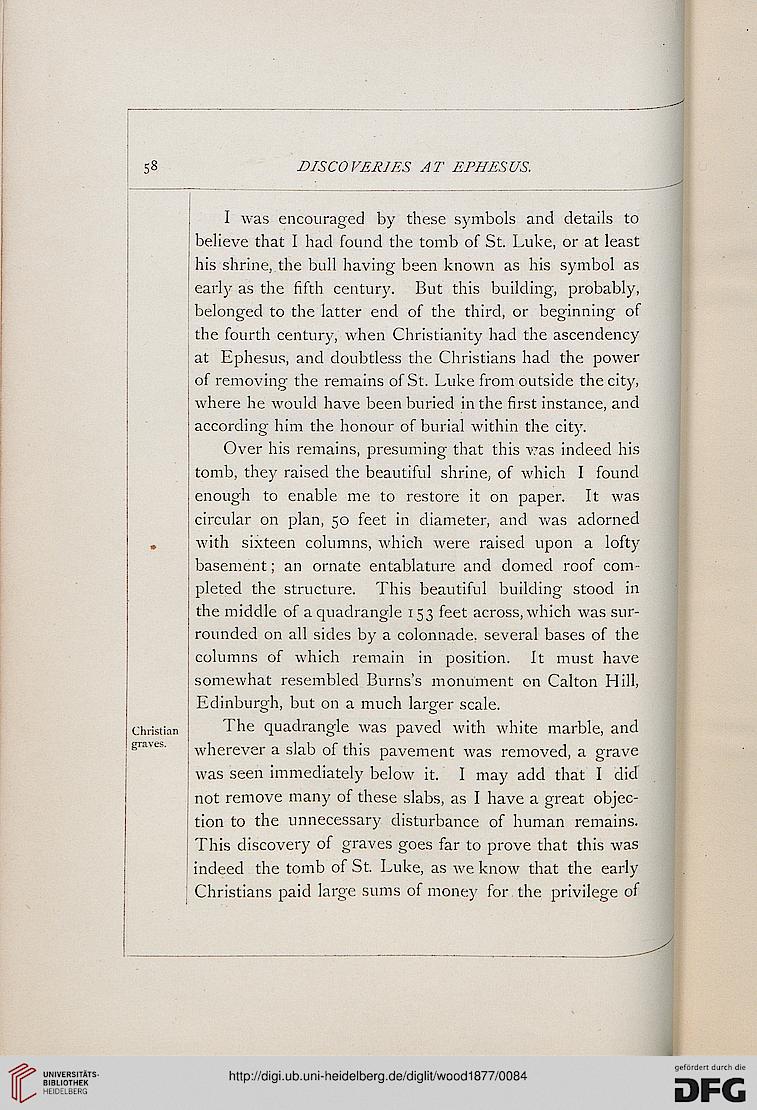 I was encouraged by these symbols and details to
believe that I had found the tomb of St. Luke, or at least
his shrine, the bull having been known as his symbol as
early as the fifth century. But this building, probably,
belonged to the latter end of the third, or beginning of
the fourth century, when Christianity had the ascendency
at Ephesus, and doubtless the Christians had the power
of removing the remains of St. Luke from outside the city,
where he would have been buried in the first instance, and
according him the honour of burial within the city.

Over his remains, presuming that this was indeed his
tomb, they raised the beautiful shrine, of which I found
enough to enable me to restore it on paper. It was
circular on plan, 50 feet in diameter, and was adorned
with sixteen columns, which were raised upon a lofty
basement; an ornate entablature and domed roof com-
pleted the structure. This beautiful building stood in
the middle of a quadrangle 153 feet across, which was sur-
rounded on all sides by a colonnade, several bases of the
columns of which remain in position. It must have
somewhat resembled Burns's monument on Calton Hill,
Edinburgh, but on a much larger scale.

The quadrangle was paved with white marble, and
wherever a slab of this pavement was removed, a grave
was seen immediately below it. I may add that I did
not remove many of these slabs, as I have a great objec-
tion to the unnecessary disturbance of human remains.
This discovery of graves goes far to prove that this was
indeed the tomb of St. Luke, as Ave know that the early
Christians paid large sums of money for the privilege of