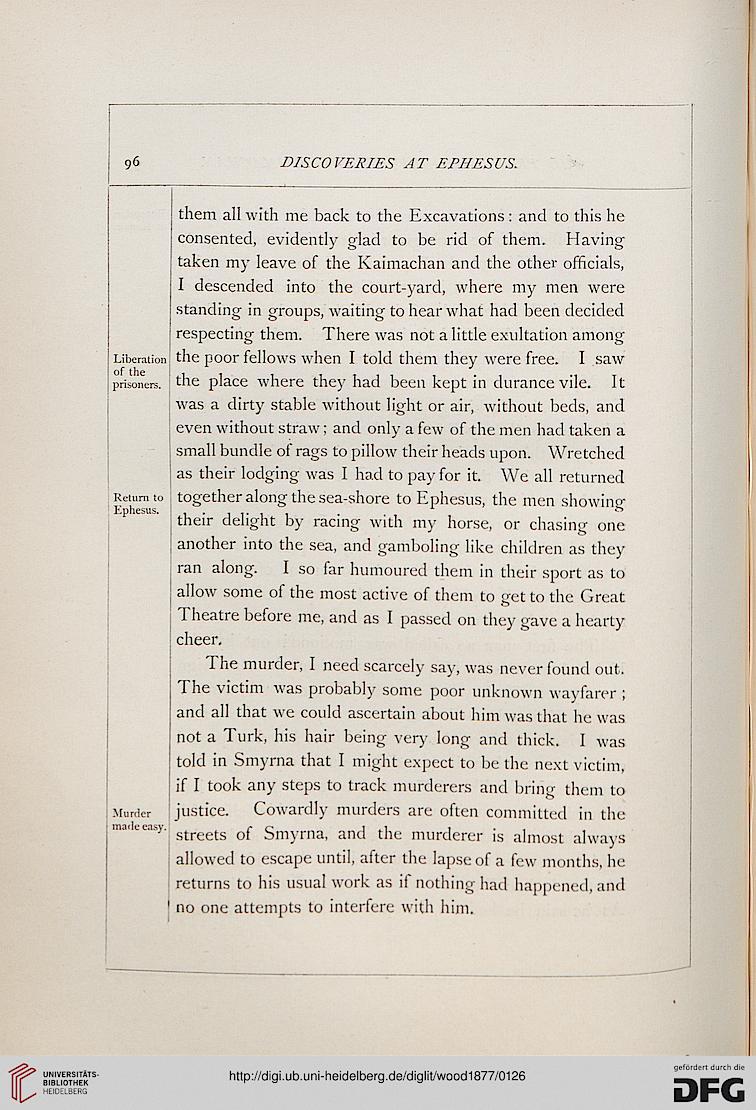 Liberation
of the
prisoners.

them all with me back to the Excavations : and to this he
consented, evidently glad to be rid of them. Having
taken my leave of the Kaimachan and the other officials,
I descended into the court-yard, where my men were
standing in groups, waiting to hear what had been decided
respecting them. There was not a little exultation among
the poor fellows when I told them they were free. I saw
the place where they had been kept in durance vile. It
was a dirty stable without light or air, without beds, and
even without straw; and only a few of the men had taken a
small bundle of rags to pillow their heads upon. Wretched
as their lodging was I had to pay for it. We all returned

Retum to together along the sea-shore to Ephesus, the men showing
their delight by racing with my horse, or chasing one
another into the sea, and gamboling like children as they
ran along. I so far humoured them in their sport as to
allow some of the most active of them to get to the Great
Theatre before me, and as I passed on they gave a hearty
cheer.

The murder, I need scarcely say, was never found out.
The victim was probably some poor unknown wayfarer ;
and all that we could ascertain about him was that he was
not a Turk, his hair being very long and thick. I was
told in Smyrna that I might expect to be the next victim,
if I took any steps to track murderers and bring them to
justice. Cowardly murders are often committed in the

ma.ieeasy. streets Qr Smyrna, and the murderer is almost always
allowed to escape until, after the lapse of a few months, he
returns to his usual work as if nothing had happened, and
1 no one attempts to interfere with him.