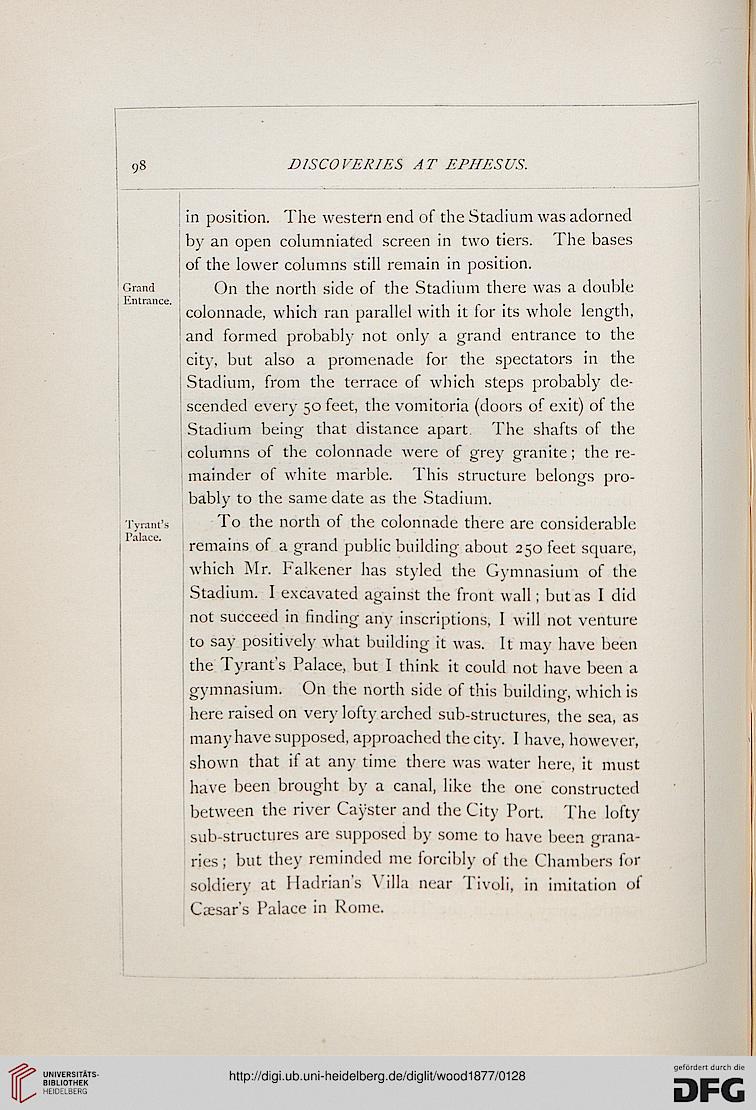 in position. The western end of the Stadium was adorned
by an open columniated screen in two tiers. The bases
of the lower columns still remain in position.

On the north side of the Stadium there was a double
colonnade, which ran parallel with it for its whole length,
and formed probably not only a grand entrance to the:
city, but also a promenade for the spectators in the
Stadium, from the terrace of which steps probably de-
scended every 50 feet, the vomitoria (doors of exit) of the
Stadium being that distance apart The shafts of the
columns of the colonnade were of grey granite; the re-
mainder of white marble. This structure belongs pro-
bably to the same date as the Stadium.

To the north of the colonnade there are considerable
remains of a grand public building about 250 feet square,
which Mr. Falkcner has styled the Gymnasium of the
Stadium. I excavated against the front wall ; but as I did
not succeed in finding any inscriptions. I will not venture
to say positively what building it was. It may have been
the Tyrant's Palace, but I think it could not have been a
gymnasium. On the north side of this building, which is
here raised on very lofty arched sub-structures, the sea, as
many have supposed, approached the city. I have, however,
shown that if at any time there was water here, it must
have been brought by a canal, like the one constructed
between the river Cayster and the City Port. The lofty
sub-structures are supposed by some to have been grana-
ries ; but they reminded me forcibly of the Chambers for
soldiery at Hadrian's Villa near Tivoli, in imitation of
Caesar's Palace in Rome.