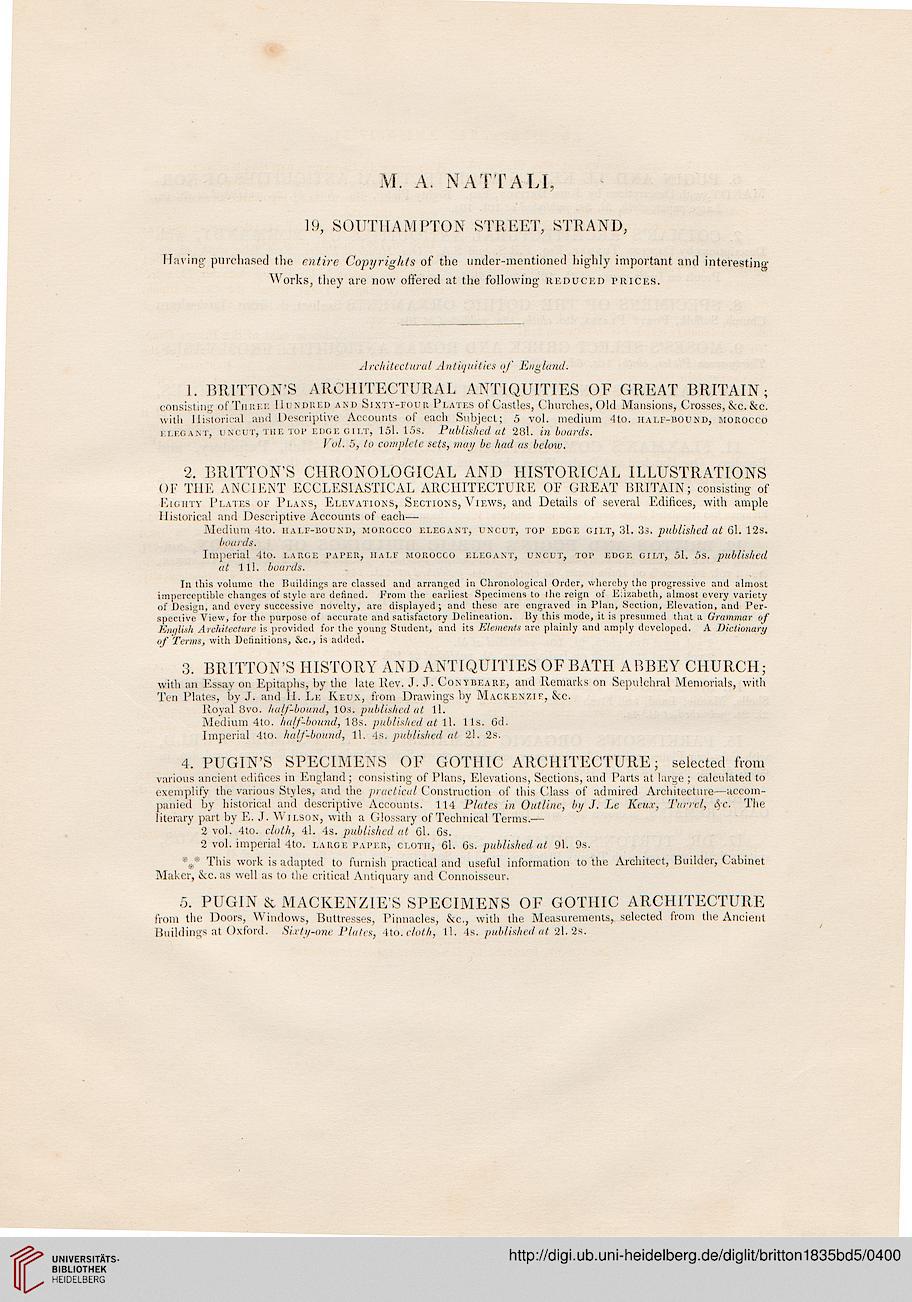 Having purchased the entire Copyrights of the under-mentioned highly important and interesting-
Works, they are now offered at the following reduced trices.

Vol. 5, to complete sets, may be had as bcloiv.

OF THE ANCIENT ECCLESIASTICAL ARCHITECTURE OF GREAT BRITAIN; consisting of
Eighty Plates of Plans, Elevations, Sections, Views, and Details of several Edifices, with ample
Historical and Descriptive Accounts of each—

In this volume the Buildings are classed and arranged in Chronological Order, whereby the progressive and almost
imperceptible changes of style are defined. From the earliest Specimens to the reign of Elizabeth, almost every variety
ot" Design, and every successive novelty, are displayed; and these are engiaved in Plan, Section, Elevation, and Per-
spective View, for the purpose of accurate and satisfactory Delineation. By this mode, it is presumed that a Grammar of
Enqlilh Architecture is provided for the young Student, and its Elements are plainly and amply developed. A Dictionary
of Terms, with Definitions, Stc., is added.

with an Essay on Epitaphs, by the late Rev. J. J- Conybeare, and Remarks on Sepulchral Memorials, with
Ten Plates, by J. and H. Le Keux, from Drawings by Mackenzie, &c.

various ancient edifices in England ; consisting of Plans, Elevations, Sections, and Parts at large ; calculated to
exemplify the various Styles, and the practical Construction of this Class of admired Architecture—accom-
panied by historical and descriptive Accounts. 114 Plates in Outline, by J. Le Keux, Turret, d}c. The
literary part by E. J. Wilson, with a Glossary of Technical Terms/—
2 vol. 4to. cloth, 41. 4s. published at 61. 6s.

2 vol. imperial 4to. large paper, cloth, 61. 6s. published at 91. 9s.
%* This work is adapted to furnish practical and useful information to the Architect, Builder, Cabinet
Maker, Sec. as well as to the critical Antiquary and Connoisseur.

from the Doors, Windows, Buttresses, Pinnacles, &c, with the Measurements, selected from the Ancient
Buildings at Oxford. Sixty-om Plates, tia.cloth, 11. 4s. published at 21.2s.