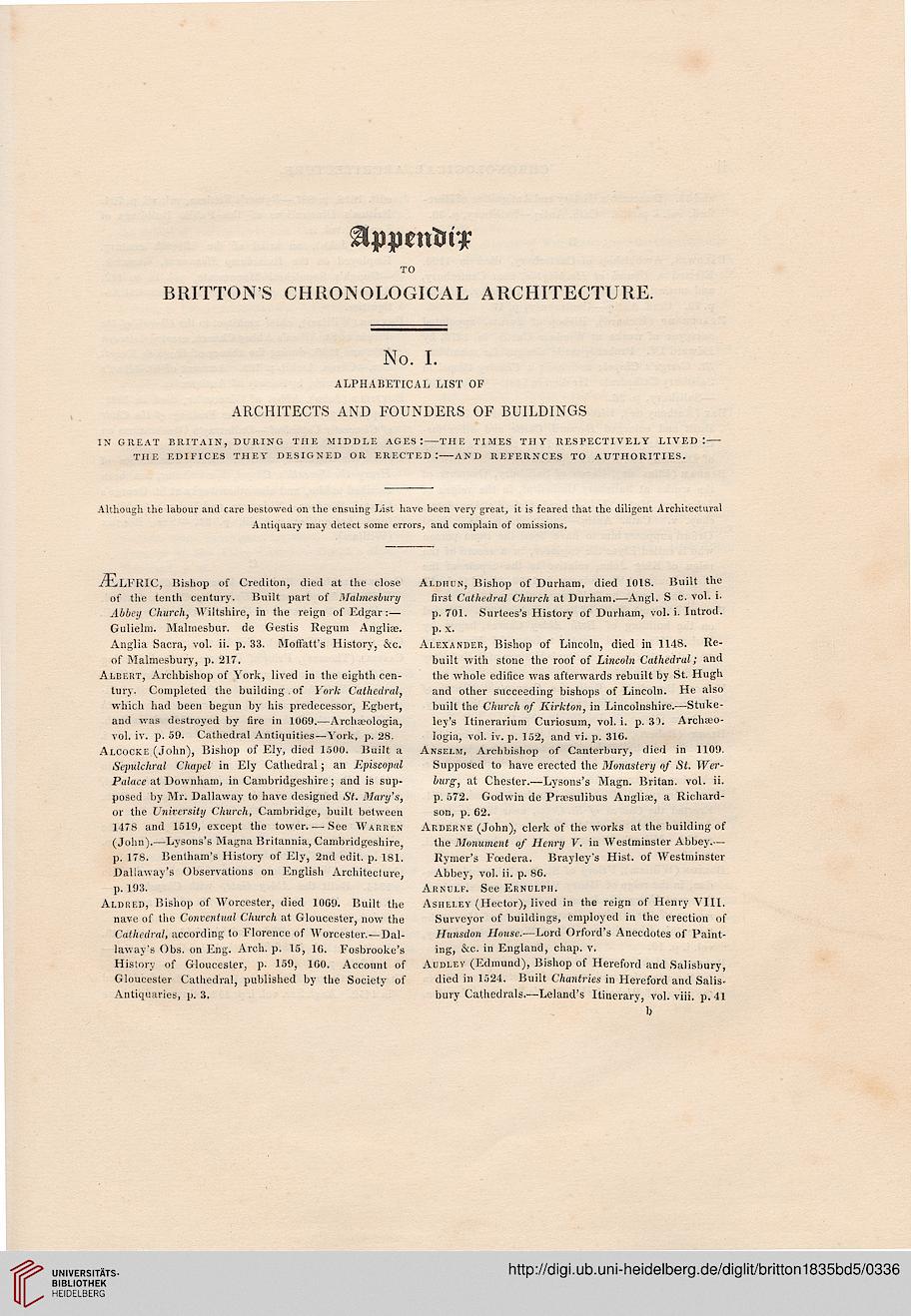 ARCHITECTS AND FOUNDERS OF BUILDINGS

IN GREAT BRITAIN, DURING THE MIDDLE AGES I-THE TIMES THY RESPECTIVELY LIVED:-

THE EDIFICES THEY DESIGNED OR ERECTED:-AND REFERNCES TO AUTHORITIES.

Although the labour and care bestowed on the ensuing List have been very great, it is feared that the diligent Architectural
Antiquary may detect some errors, and complain of omissions.

Albert, Archbishop of York, lived in the eighth cen-
tury. Completed the building of York Cathedral,
which had been begun by his predecessor, Egbert,
and was destroyed by fire in 1069.—Archaeologia,
vol. iv. p. 50. Cathedral Antiquities—York, p. 28.

Alcocke (John), Bishop of Ely, died 1500. Built a
Sepulchral Chapel in Ely Cathedral; an Episcopal
Palace at Downham, in Cambridgeshire ; and is sup-
posed by Mr. Dallaway to have designed St. Mary's,
or the University Church, Cambridge, built between

Aldkf.d, Bishop of Worcester, died 10C9. Built the
nave of the Conventual Church at Gloucester, now the
Cathedral, according to Florence of Worcester.—Dal-
laway's Obs. on Eng. Arch. p. 15, 16. Fosbrooke's
History of Gloucester, p. 159, 160. Account of
Gloucester Cathedral, published by the Society of
Antiquaries, p. 3.

Alexander, Bishop of Lincoln, died in 1148. Re-
built with stone the roof of Lincoln Cathedral; and
the whole edifice was afterwards rebuilt by St. Hugh
and other succeeding bishops of Lincoln. He also
built the Church of Kirkton, in Lincolnshire.—Stuke-
ley's Itinerarium Curiosum, vol. i. p. 35. Archaso-
logia, vol. iv. p. 152, and vi. p. 316.

Arderne (John), clerk of the works at the building of
the Monument of Henry V. in Westminster Abbey.—
Rymer's Fcedera. Brayley's Hist, of Westminster
Abbey, vol. ii. p. 86.

Asheley (Hector), lived in the reign of Henry VIII.
Surveyor of buildings, employed in the erection of
Hunsdon House.—Lord Orford's Anecdotes of Paint-
ing, &c. in England, chap. v.