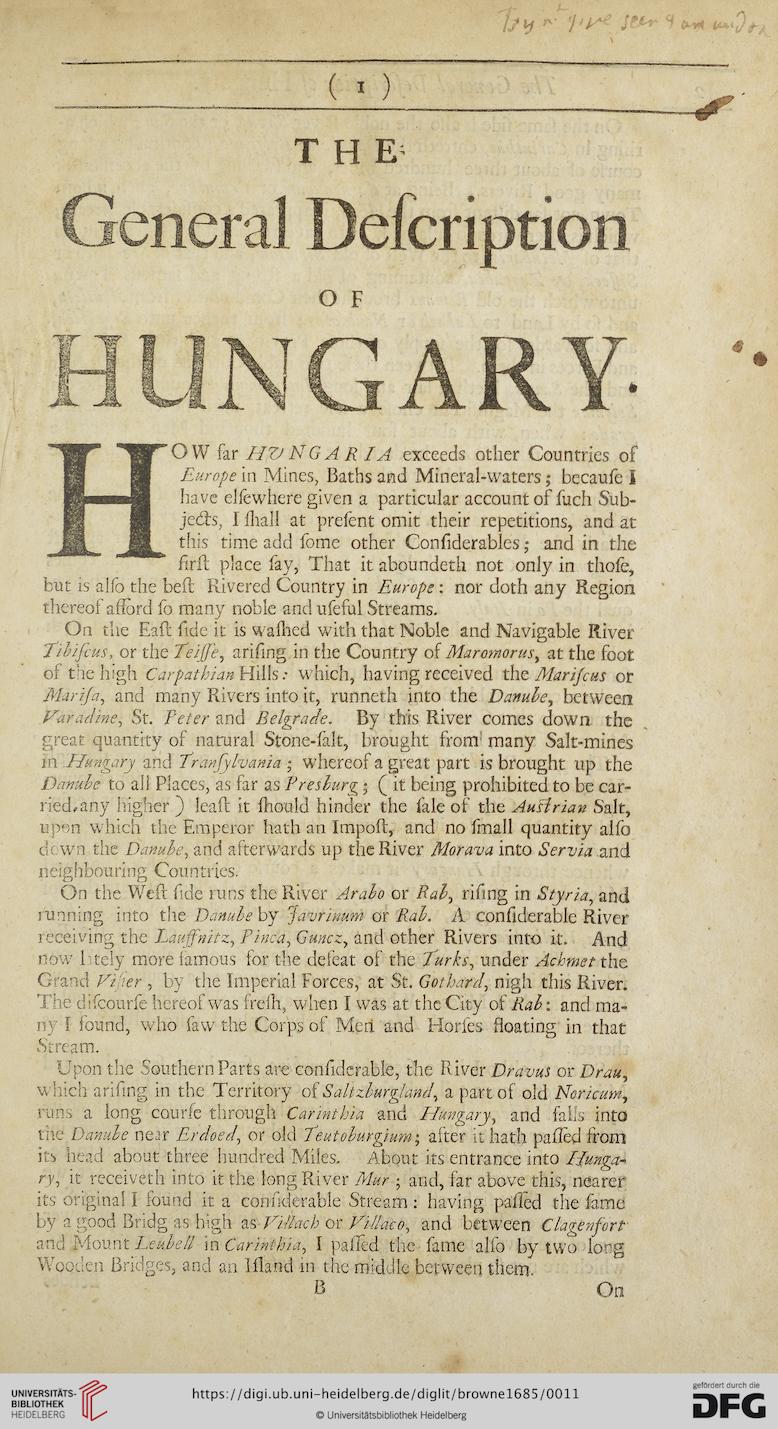 Scroll
OCR fulltext
Information about OCR text
(I)
THE’

HO W far H V NG A R IA exceeds other Countries of
Europe in Mines, Baths and Mineral-waters; because 1
have elsewhere given a particular account of such Sub-
jects, I dial! at present omit their repetitions, and at
this time add some other Considerables; and in the
firsi place say, That it aboundeth not only in those,
but is also the belt Riveted Country in Europe: nor doth any Region
thereof afford so many noble and useful Streams.
On the EaPc side it is washed with that Noble and Navigable River
Tibifcus, or the Teijje, arising in the Country of Maromorus, at the foot
of the high Carpathian Hills: which, having received the Mariscus or
Marija, and many Rivers into it, runneth into the Danube, between
Varadine, St. Veter and Belgrade. By this River comes down the
great quantity of natural Stone-salt, brought from1 many Salt-mines
m Hungary and Trcmfylvania ; whereof a great part is brought up the
Danube to all Places, as far as Preslurg; Q it being prohibited to be car-
ried,any higher ) least it should hinder the sale of the Austrian Salt,
upon which the Emperor hath an Impost, and no small quantity also
dcwn the Danube, and afterwards up the River Morava into Servia and
neighbouring Countries.
On the West side runs the River Aralo or Rai, rising in Styria, and
running into the Danube by Javrinum or Rai. A conssderable River
receiving the Lauffnitz, Pinca, Guncz, and other Rivers into it. And
now 1 tely more samous for the defeat of the Turks, under zfcZw^rthe
Grand Viler , by the Imperial Forces, at St. Gothard, nigh this River.
The discourse hereos was fresh, when I was at the City of Rab: and ma-
ny I found, who saw the Corps of Men and Horses ssoating in that
Stream.
Upon the Southern Parts are considerable, the River Dravus or Drau,
which arising in the Territory of S alt zlurgland, a part of old Noricum,
runs a long course through Carinthia and Hungary, and falls into
the Danube near Erdoed, or old Teutoburgium', after it hath passed from
its head about three hundred Miles. About its entrance into Hunga-
ry, it receiveth into it the long River A&r ; and, far above this, nearer
its original I found it a considerable Stream: having passed the same
by a good Bridg as high as Villach or Villaco, and between Clagenfort
and Mount Leubell \n Carinthia, I passed the same also by two long
Wooden Bridges, and an Island in the middle between them.