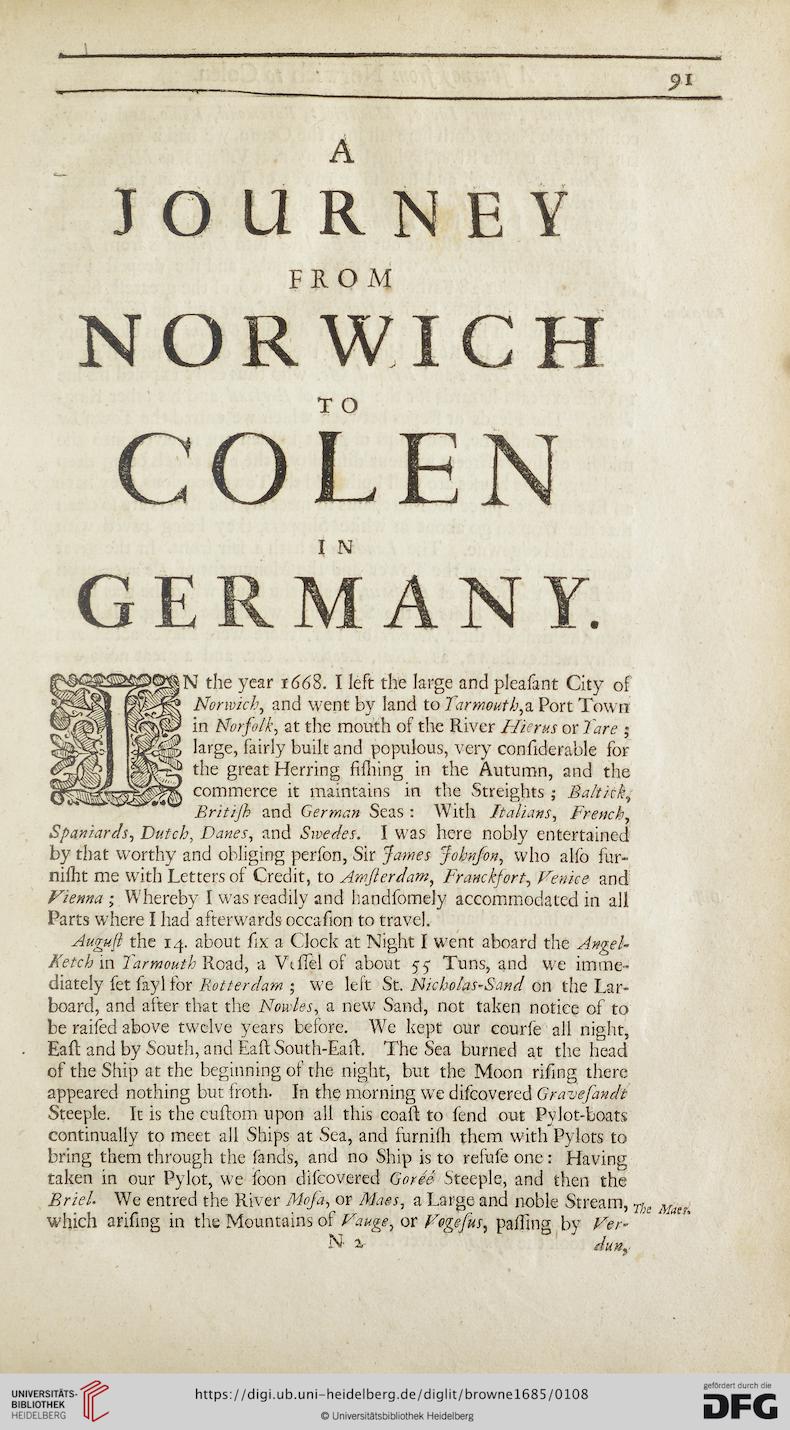 Scroll
OCR fulltext
Information about OCR text
A
JOURNEY
FROM

the year 1668. I left the large and pleasant City of
Norwich^ and went by land to Tarmouth^ Port Town
in Norsolk^ at the mouth of the River Flier ns or Tare ;
large, fairly built and populous, very considerable for
the great Herring filhing in the Autumn, and the
commerce it maintains in the Streights ; Balticls
Britifh and German Seas : With Italians) French,
Spaniards) Dutch, DaneS) and Swedes. I was here nobly entertained
by that worthy and obliging person, Sir James Johnfon) who also fur-
nilht me with Letters of Credit, to Amflerdain, Franckfort) Fenice and
Vienna ; Whereby I was readily and bandsomely accommodated in all
Parts where I had afterwards occasion to travel.
Augufi the 14. about six a Clock at Night I went aboard the Angel-
Fetch in Tarmouth Road, a Vcssel os about 55* Tuns, and we imme-
diately set sayl for Rotterdam ; we lest St. Nicholas-Sand on the Lar-
board, and after that the Nowles, a new Sand, not taken notice of to
be railed above twelve years before. We kept our course all night,
East and by South, and East South-East. The Sea burned at the head
of the Ship at the beginning of the night, but the Moon rising there
appeared nothing but froth. In the morning we diseovered Gravefandt
Steeple. It is the custom upon all this coast to send out Pylot-boats
continually to meet all Ships at Sea, and furnish them with Pylots to
bring them through the sands, and no Ship is to refuse one: Having
taken in our Pylot, we foon diseovered Goree Steeple, and then the
Briel. We entred the River Mofa) or Maes, a Large and noble Stream,
which arising in the Mountains of Vavge, or FogefuS) passing by Per-
N- x dun*