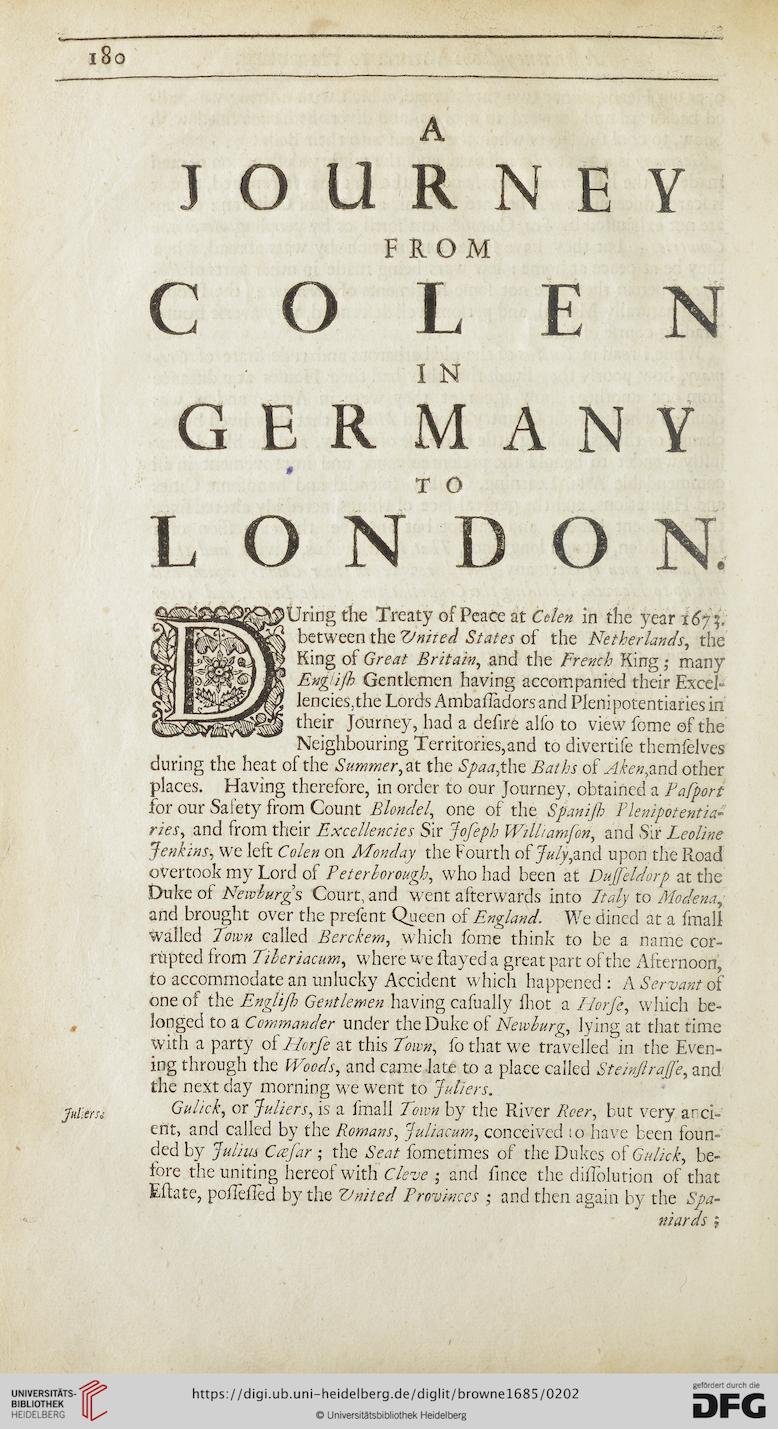 Jringthe Treaty of Peace at in the year 167;.
between the United States of the Netherlands, the
King of Great Britain, and the French King; many
Engyijh Gentlemen having accompanied their Excel-
lencies.the Lords Ambaftadors and Plenipotentiaries in
their Journey, had a desire also to view sorne of the
Neighbouring Territories,and to divertise themselves
during the heat of the Summer,^ the Spaa,the Baths of AZs(?»,and other
places. Having therefore, in order to our Journey, obtained a Paspori
for our Safety from Count Blondel, one of the Spanifh Plenipotentia-
ries, and from their Excellencies Sir Jofeph Wiiliamfon, and Sir Leoline
Jenkins, we left Colen on Monday the Fourth of July,and upon the Road
overtook my Lord os Peterborough, who had been at Duffeldorp at the
Duke of Newburgs Court, and went afterwards into Italy to Modena,
and brought over the present Queen of England. We dined at a sinal!
walled Town called Berckem, which some think to be a name cor-
rupted from Tiberiacum, where we Rayed a great part of the Asternoon,
to accommodate an unlucky Accident which happened : A Servant of
one of the EngliJh Gentlemen having casually lhot a Horfe, which be-
longed to a Commander under the Duke of Newburg, lying at that time
with a party of Horfe at this Town, so that we travelled in the Even-
ing through the Woods, and came late to a place called Steinflraffe, and
the next day morning we went to Juliers.
Gulick, or Juliers, is a small by the River Rcer, but very anci-
ent, and called by the Romans, Juliacum, conceived to have been foun-
ded by Julius Crefar ; the Seat fometimes of the Dukes of Gulick, be-
fore the uniting hereof with Cleve ; and since the dissolution of that
ERate, posiessed by the United Provinces ; and then again by the Spa-
niards j