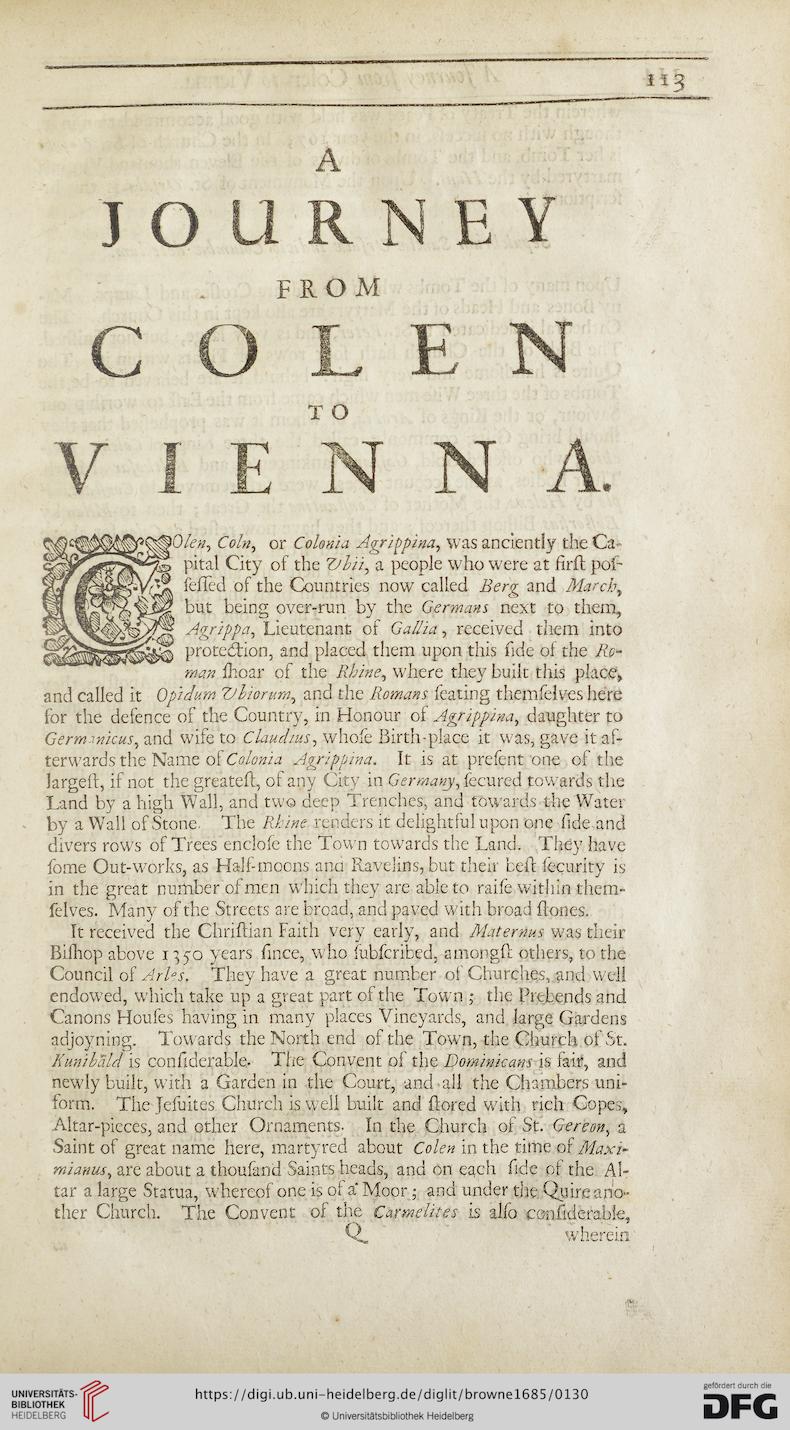 Glen, Coin, or Colonia Agrippina, was anciently the Ca-
pital City of the Vlii, a people who were at first pos-
selled of the Countries now called Berg and March,
but being over-run by the Germans next to them,
Agrippa, Lieutenant of Gallia, received them into
J protection, and placed them upon this side of the Ro-
man ihoar of the Rhine, where they built this place,
and called it Opidum Vliorum, and the Romans seating themselves here
for the defence of the Country, in Honour of Agrippina, daughter to
Germanicus, and wife to Claudius, whole Birth-place it was, gave it af-
terwards the Name of Colonia Agrippina. It is at present one of the
largest, if not the greatest, of any City in Germany, secured towards the
Land by a high Wall, and two deep Trenches, and towards the Water
by a Wall os Stone. The Rhine renders it delightful upon one side.and
divers rows of Trees enclose the Town towards the Land. They have
some Out-works, as Half-moons ano Ravelins, but their Lest security is
in the great number of men which they are able to raise within them-
selves. Many of the Streets are broad, and paved with broad Rones.
It received the Christian Faith very early, and Maternus was their
Bilhop above i^yo years since, who subscribed, amongst others, to the
Council of Arles. They have a great number of Churches, and well
endowed, which take up a great part of the Town ; the Prebends and
Canons Houses having in many places Vineyards, and large Gardens
adjoyning. Towards the North end of the Town, the Church of St.
Kunilald is considerable- The Convent of the Dominicans is fair, and
newly built, with a Garden in the Court, and all the Chambers uni-
form. The Jesuites Church is well built and Bored with rich Copes,
Altar-pieces, and other Ornaments. In the Church of St. Gereon, a
Saint of great name here, martyred about Colen in the time os Maxi-
mianus, are about a thousand Saints heads, and on each side of the Al-
tar a large Statua, whereos one is of a Moor; and under the Quire ano-
ther Church. The Convent of the Carmelites is also considerable,
Q* wherein