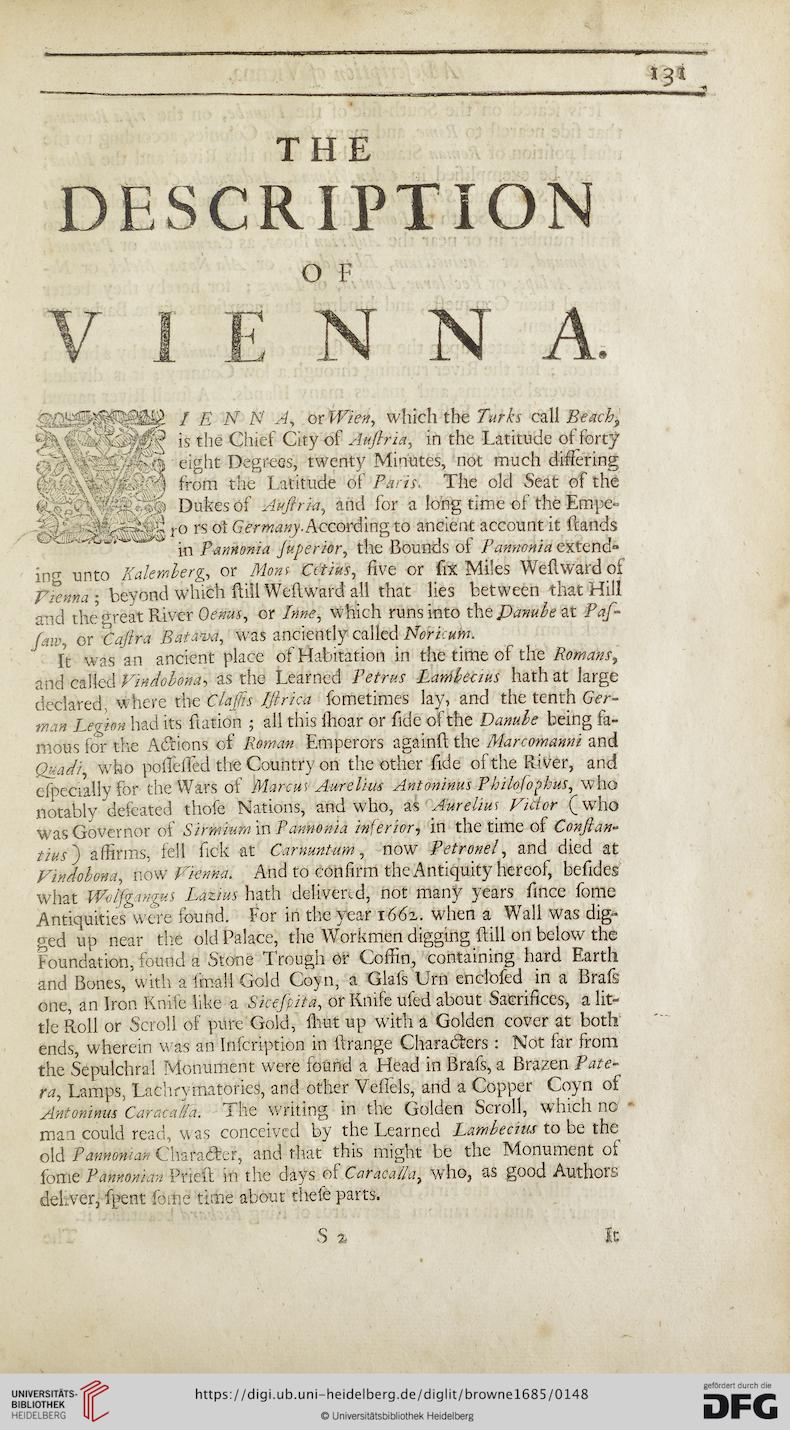 
I E N N' Ay or Wien, which the Turks call Beach*
*s ^ie Chief City of Auftria, in the Latitude of forty
rCh eight Degrees, twenty Minutes, not much dissering
C J from ^e Latitude of Paris. The old Seat of the
Dukes of Auftria, and for a long time of the Empe~
tW f 0 rs °* Germany.According to ancient account it (lands
in Pannonia Juperior, the Bounds of Pannonia extend-
ing unto Kalemberg, or Mons Cetius, five or six Miles Westward of
Vienna ; beyond which still Westward all that lies between that Hill
and the great River Genus, or Inne, which runs into the Danube at Pas-
faw, or Cajira Batawa, was anciently called Noricum.
It was an ancient place of Habitation in the time of the Romans*
and called Vindobona, as the Learned Petrus Lambecius hath at large
declared, where the Claftis Istrica sometimes lay, and the tenth Ger-
man Legion had its station ; all this shoar or side of the Danube being fa-
mous for the Actions of Roman Emperors against the Marcomanni and
Quadi, who possested the Country on the other side of the River, and
especially for the Wars os Marcus Aurelius Antoninus Philosophus, who
notably defeated those Nations, and who, as Aurelius Vidor (who
was Governor of in inferior, in the time of Conftan-
tins') affirms, fell sick at Carnuntum, now Petronel, and died at
Vindobona, now Vienna. And to confirm the Antiquity hereof, besides
what Wolsgangus Lazius hath delivered, not many years since some
Antiquities were found. For in the year 1662,. when a Wall was dig-
ged up near the old Palace, the Workmen digging still on below the
Foundation, found a Stone Trough or Coffin, containing hard Earth
and Bones, with a small Gold Coyn, a Glass Urn enclosed in a Brass
one, an Iron Knise like a Sicefpita, or Knife used about Sacrifices, a lit-
tle Roll or Scroll of pure Gold, slrut up with a Golden cover at both
ends, wherein was an Inscription in strange Characters : Not far from
the Sepulchral Monument were found a Head in Brass, a Brazen Pate-
ra, Lamps, Lachrymatories, and other Vesiels, and a Copper Coyn of
Antoninus Caracalla. The writing in the Golden Scroll, which no
man could read, was conceived by the Learned Lambecius to be the
old Pannonian Character, and that this might be the Monument of
some Pannonian Priell in the days of Caracalla, who, as good Authors
debver, spent some time about these parts.