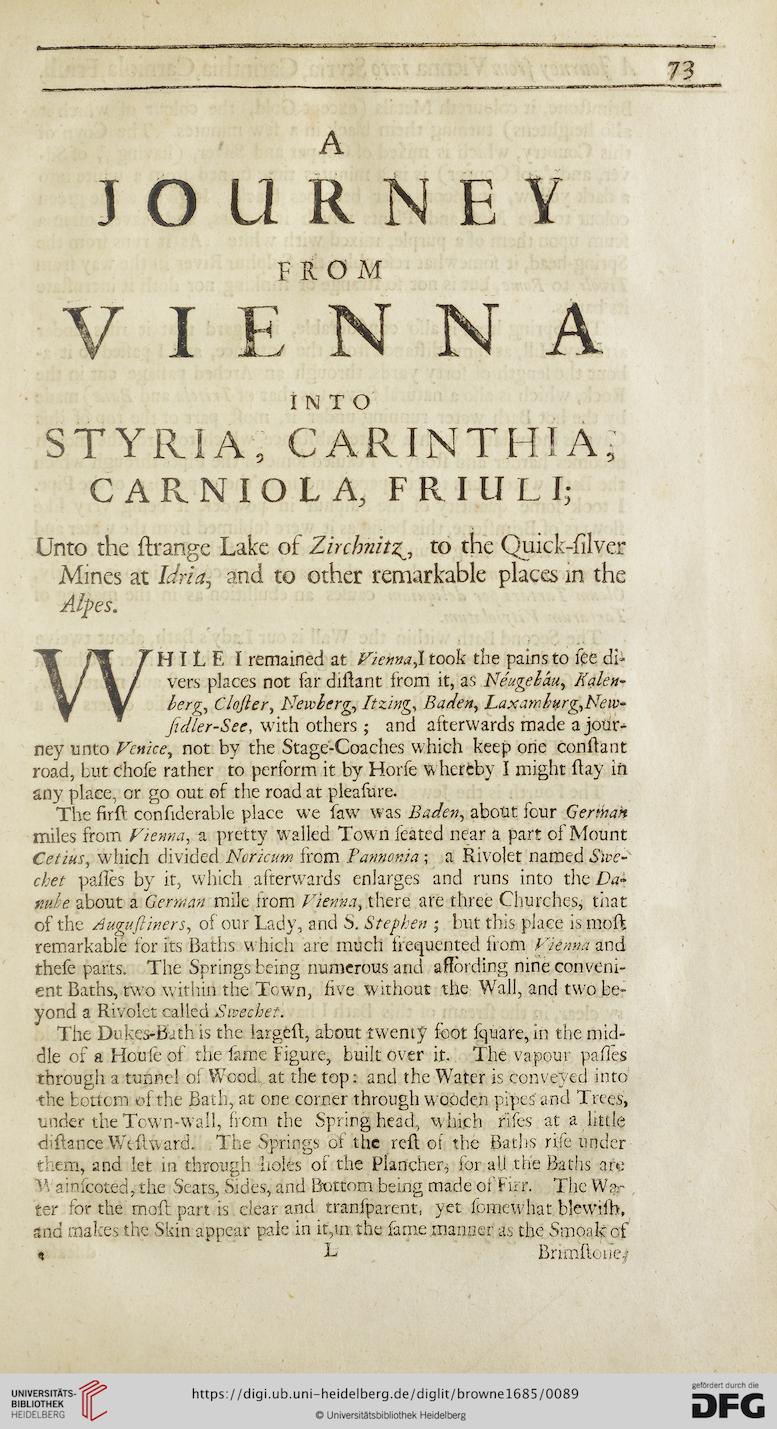 Unto the strange Lake of Zirchnitz^ to the Quick-silver
Mines at Z/mz, and to other remarkable places in the
Afyes.

HILE I remained at Fzmtf ,1 took the pains to see di-
vers places not far diflant from it, as Neugelau, Kalen-
berg, Clofter, Newberg, It zing, Baden, Laxamburg,New-
fidler-See, with others; and afterwards made a jour-
ney unto Venice, not by the Stage-Coaches which keep one constant
road, but chose rather to perform it by Horse whereby I might flay in
any place, or go out of the road at pleasure.
The first considerable place we saw was Baden, about four Ge/ww*
miles from Vienna, a pretty walled Town seated near a part of Mount
Cetins, which divided Noricum from Pannonia ; a Rivolet named Swe-
chet passes by it, which afterwards enlarges and runs into the Az-
about a German mile srom Vienna, there are three Churches, that
of the Bugufliners, of our Lady, and S. Stephen ; but this place is most
remarkable for its Baths which are much frequented fiom Vienna and
these parts. The Springs being numerous and affording nine conveni-
ent Baths, two within the Town, five without the Wall, and two be-
yond a Rivolet called Swechet.
The Dukes-Bath is the largest, about twenty foot square,in the mid-
dle of a House of rhe same Figure, built over it. The vapour passes
through a tunnel os Wood at the top: and the Water is conveyed into
the bottom of the Bath, at one corner through wooden pipes'and Trees,
under the Town-wall, from the Springhead, which sises at a little
distance Westward. The Springs of the rest os the Baths rise under
them, and let m through holes os the Plancher^ sor all the Baths are
V ainseoted, the Seats, Sides, and Bottom being made os Fu r. The W^r
ter for the most part is clear and transparent, yet spmewhat blewilh,
and makes the Skin appear pale in it,in the same manner as the Smoakof
n L Brimssorse/