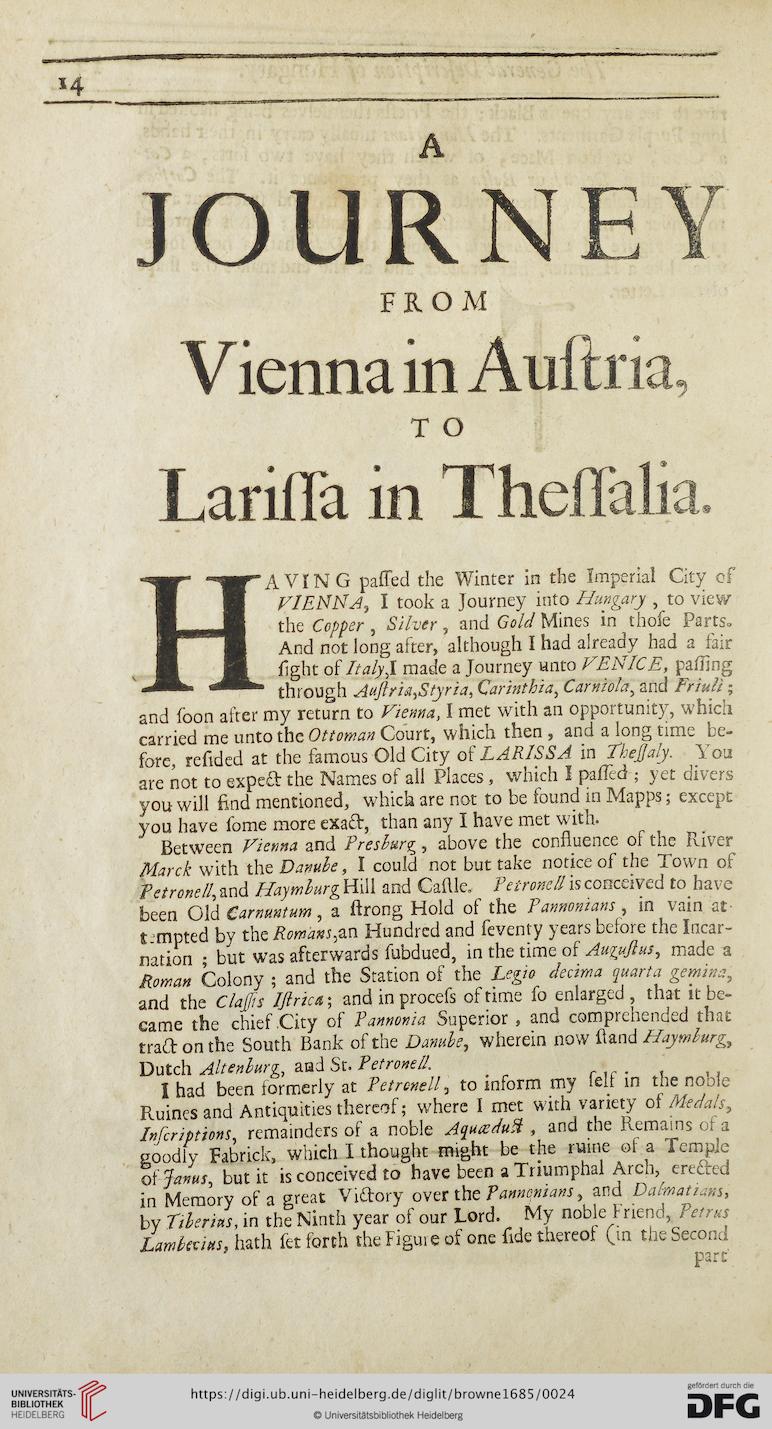 JOURNEY
FROM
Vienna in Austria,
T O
Larissa in Thessalia.
HAVING paired the Winter in the Imperial City of
VIENNA, I took a Journey into Hungary , to view
the Copper, Silver ? and Gold Mines in those Parts^
And not long after, although I had already had a fair
sight of It alyl made a Journey unto VENICE, palling
through Auftria,Styria, Carinthia, Carniola, and Friuli;
and soon after my return to Vienna, I met with an opportunity, which
carried me unto the Ottoman Court, which then , and a long time be-
fore, resided at the famous Old City of LARISSA in Thessaly. You
are not to exped the Names of all Places, which I palled ; yet divers
you will find mentioned, which are not to be found in Mapps; except
you have some more exaft, than any I have met with.
Between Vienna and Presburg, above the conssuence of the River
Marek with the Dannie, I could not but take notice of the Town of
Petronell, and Haymlurg Hill and Cassle, Petronell is conceived to have
been Old Carnuntum, a strong Hold of the Pannonians, in vain at-
tempted by the R6W4»j,an Hundred and seventy years before the Incar-
nation ; but was afterwards subdued, in the time of Auguslus, made a
Roman Colony ; and the Station of the Legio decima quarta gemina,
and the ClaJJis IJlrica; and in process of time so enlarged , that it be-
came the chief City of Pannonia Superior , and comprehended that
trad on the South Bank of the Danube, wherein now Hand Haymlurg,
Dutch Altenburg, and Sr. Petronell.
I had been formerly at Petronell, to inform my self in the noble
Ruines and Antiquities thereof; where I met with variety of Medals,
Inscriptions, remainders os a noble Aquteduft , and the Remains of a
goodly Fabrick, which I thought might be the ruine of a Temple
of Janus, but it is conceived to have been a Triumphal Arch, ereded
in Memory of a great Vidory over the Pannonians, and Dalmatians,
by Tiberias, in the Ninth year of our Lord. My noble Friend, Petrus
Lam I touts, hath set forth the Figuie of one side thereof (in the Second