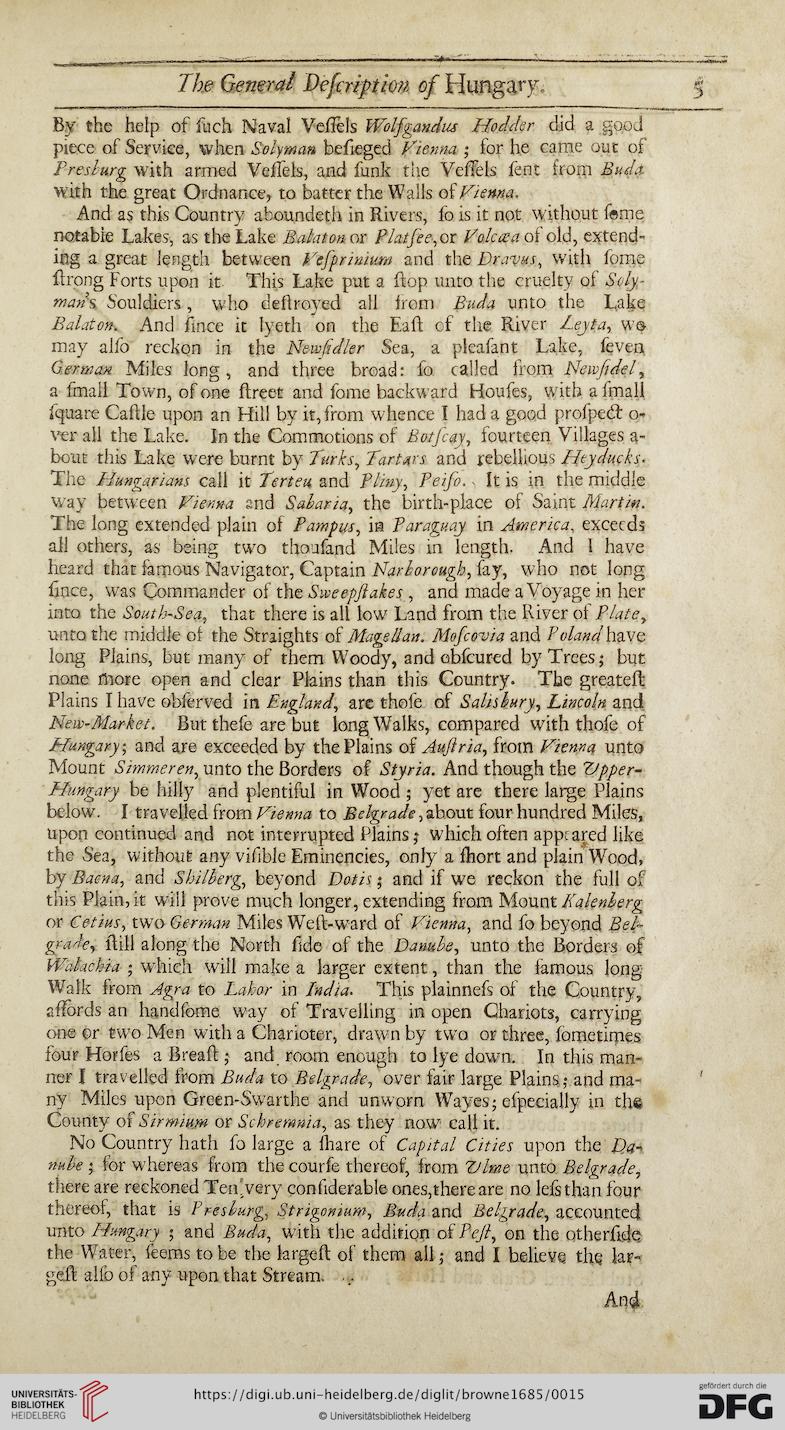 
By the help of such Naval Vefiels Wolsgandus Hodder did a good
piece of Service, when Solyman besieged Vienna ; for he came out of
Preslurg with armed Veslels, and sunk the VesTels sent from Buda
with the great Ordnance, to batter the Walls <£ Vienna.
And as this Country aboundeth in Rivers, so is it not without seme
notable Lakes, as the Lake Balaton or Platfee,or Volcqa of old, extend-
ing a great length between Vefprinium and the Dravus, with some
strong Forts upon it This Lake put a hop unto the cruelty of Soly-
mans Souldiers, who deftroyed all srom Buda unto the Lake
Balaton. And since it lyeth on the East of the River Zeyta, w&
may also reckon in the Newsidler Sea, a pleasant Lake, (even
German Miles long, and three broad: so called from Neivfidel,
a lmall Town, os one street and some backward Houses, with asmali
square Cadle upon an Hill by it, from whence I had a good prosped: o-
ver all the Lake. In the Commotions of Botjcay, fourteen Villages a-
bout this Lake were burnt by Turks., Tartars and rebellious Heyducks.
The Hungarians call it Terteu and Pliny, Peiso. > It is m the middle
way between Vienna and Salaria, the birth-place os Saint Martin.
The long extended plain of Pampas, in Paraguay in America, exceeds
all others, as being two thousand Miles in length. And I have
heard that samous Navigator, Captain Narlorough, say, who not long
since, was Commander of the Sweepftakes , and made a Voyage in her
into the South-Sea, that there is all low Land from the River of Plate,
unto the middle of the Straights of Magellan. Moscowia and Poland have
long Plains, but many of them Woody, and obseured by Trees; but
none more open and clear Plains than this Country. The greatest
Plains I have observed in England, arc those of Salisbury, Lincoln and
New-Market. But these are but long Walks, compared with those of
Hungary', and are exceeded by the Plains os Austria, from Vienna unto
Mount Simmeren, unto the Borders os Styria. And though the Upper-
Hungary be hilly and plentiful in Wood ; yet are there large Plains
below. I travelled from Vienna to Belgrade, about sour hundred Miles,
upon continued and not interrupted Plains; which often appeared like
the Sea, without any visible Eminencies, only a fliort and plain Wood,
by Bacna, and Shilberg, beyond Dotis; and if we reckon the full of
this Plain, it will prove much longer, extending from Mount Kalenlerg
or Cetius, two German Miles West-ward of Vienna, and so beyond Bel-
grade, flill along the North side of the Danube, unto the Borders of
Walachia ; which will make a larger extent, than the famous long
Walk from Agra to Labor in India. This plainness of the Country,
assords an handsome way of Travelling in open Chariots, carrying
one or two Men with a Charioter, drawn by two or three, sometimes
four Horses a Breast; and room enough to lye down. In this man-
ner I travelled from Buda to Belgrade, over sair large Plains; and ma-
ny Miles upon Green-Swarthe and unworn Wayes; especially in the
County os Sirmium or Schremnia, as they now call it.
No Country hath so large a share os Capital Cities upon the Da-
nube ; for whereas from the course thereof, from Dime unto Belgrade,
there are reckoned Tern very considerable ones,there are no lessthan four
thereof, that is Preslurg, Strigonium, Buda and Belgrade, accounted
unto Hungary ; and Buda, with the addition of Pefl, on the otherside
the Water, seems to be the largest of them all; and I believe the lar-
gest also os any upon that Stream. ...
And