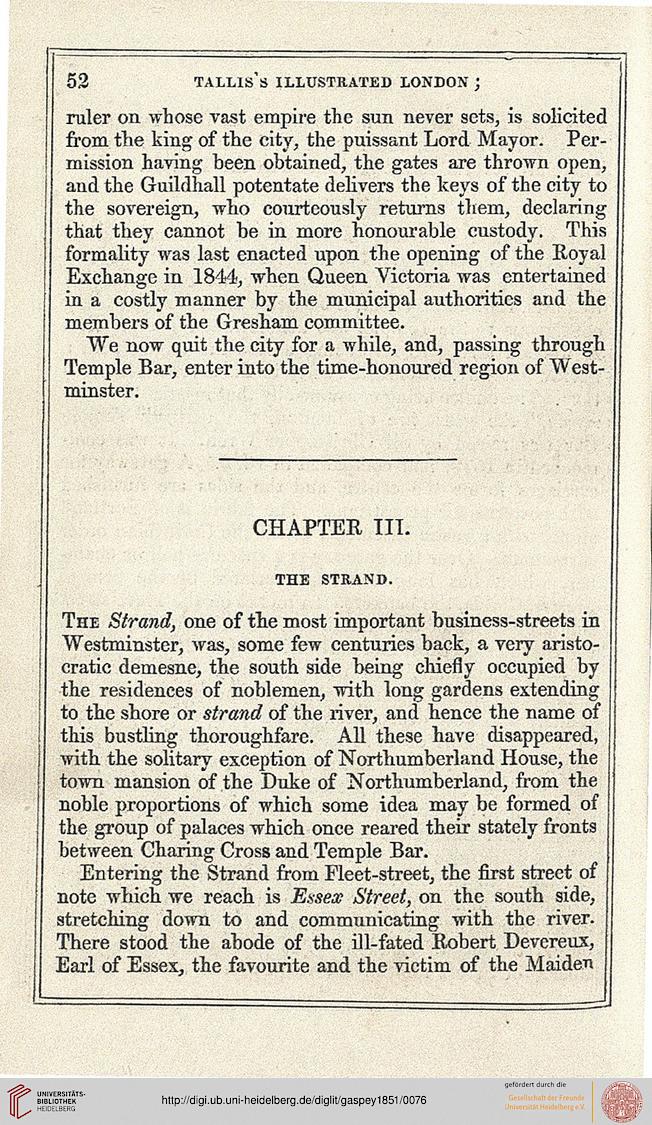 ruler on whose vast empire the sun never sets, is solicited
from the king of the city, the puissant Lord Mayor. Per-
mission having heen obtained, the gates are thrown open,
and the Guildhall potentate delivers the keys of the city to
the sovereign, who courteously returns them, declaring
that they cannot be in more honourable custody. This
formality was last enacted upon the opening of the Royal
Exchange in 1844., when Queen Victoria was entertained
in a costly manner by the municipal authorities and the
members of the Gresham committee.

"We now quit the city for a while, and, passing through
Temple Bar, enter into the time-honoured region of West-
minster.

The Strand, one of the most important business-streets in
Westminster, was, some few centuries back, a very aristo-
cratic demesne, the south side being chiefly occupied by
the residences of noblemen, with long gardens extending
to the shore or strand of the river, and hence the name of
this bustling thoroughfare. All these have disappeared,
with the solitary exception of Northumberland House, the
town mansion of the Duke of Northumberland, from the
noble proportions of which some idea may be formed of
the group of palaces which once reared their stately fronts
between Charing Cross and Temple Bar.

Entering the Strand from Fleet-street, the first street of
note which we reach is Essex Street, on the south side,
stretching down to and communicating with the river.
There stood the abode of the ill-fated Robert Devereux,
Earl of Essex, the favourite and the victim of the Maiden