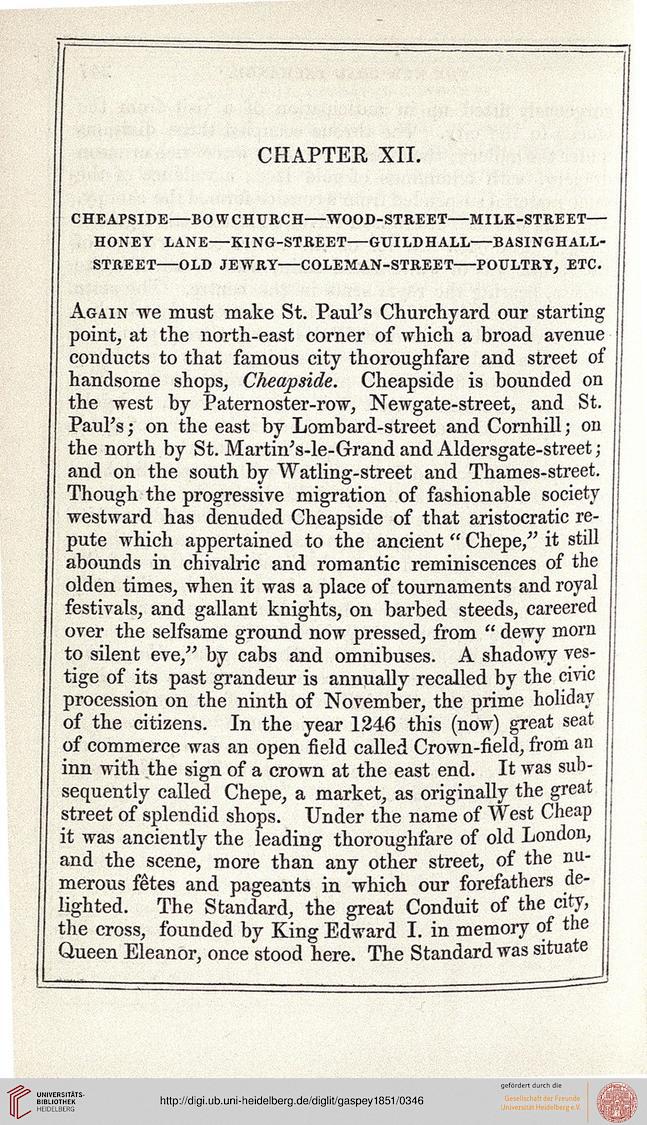 Again we must make St. PauFs Churchyard our starting
point, at the north-east corner of which a broad avenue
conducts to that famous city thoroughfare and street of
handsome shops, Cheapside. Cheapside is hounded on
the west by Paternoster-row, Newgate-street, and St.
Paul's; on the east by Lombard-street and Cornhill; on
the north by St. Martin's-le-GrandandAldersgate-street;
and on the south by Watling-street and Thames-street.
Though the progressive migration of fashionable society
westward has denuded Cheapside of that aristocratic re-
pute which appertained to the ancient " Chepe/' it still
abounds in chivalric and romantic reminiscences of the
olden times, when it was a place of tournaments and royal
festivals, and gallant knights, on barbed steeds, careered
over the selfsame ground now pressed, from " dewy morn
to silent eve/' by cabs and omnibuses. A shadowy ves-
tige of its past grandeur is annually recalled by the civic
procession on the ninth of November, the prime holiday
of the citizens. In the year 1246 this (now) great seat
of commerce was an open field called Crown-field, from an
inn with the sign of a crown at the east end. It was sub-
sequently called Chepe, a market, as originally the great
street of splendid shops. Under the name of West Cheap
it was anciently the leading thoroughfare of old London,
and the scene, more than any other street, of the nu-
merous fetes and pageants in which our forefathers de-
lighted. The Standard, the great Conduit of the city,
the cross, founded by King Edward I. in memory of the
Queen Eleanor, once stood here. The Standard was situate