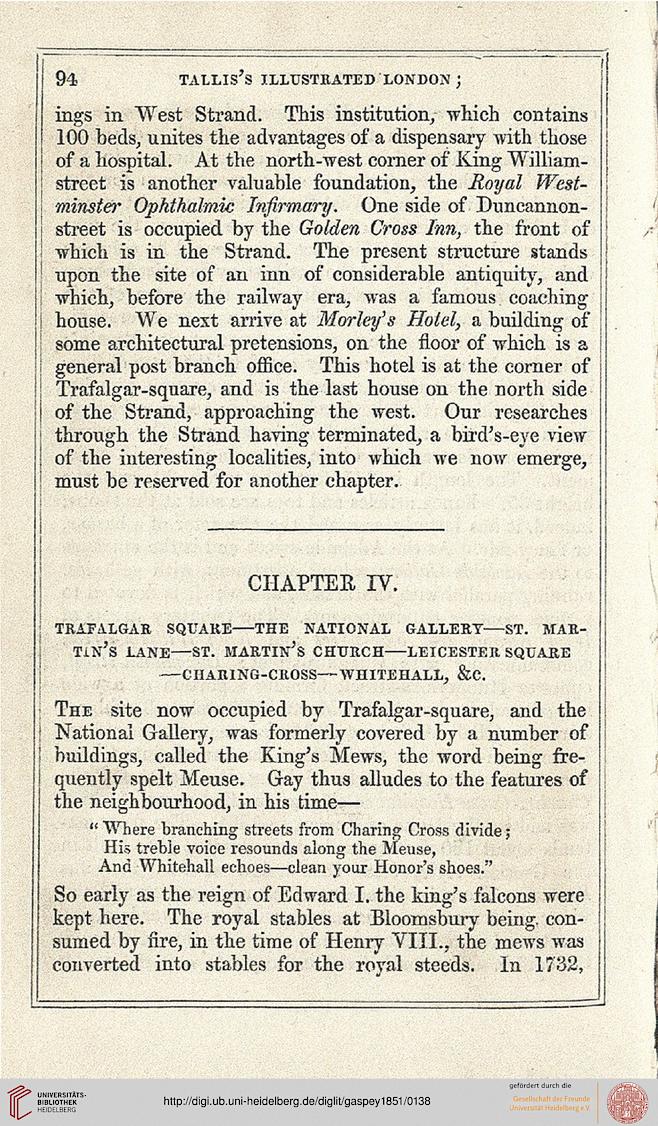 ings in West Strand. This institution, which contains
100 beds, unites the advantages of a dispensary with those
of a hospital. At the north-west comer of King William-
street is another valuable foundation, the Royal West-
minster Ophthalmic Infirmary. One side of Duncannon-
street is occupied by the Golden Cross Inn, the front of
which is in the Strand. The present structure stands
upon the site of an inn of considerable antiquity, and
which, before the railway era, was a famous couching
house. We next arrive at Morley's Hotel, a building of
some architectural pretensions, on the floor of which is a
general post branch office. This hotel is at the corner of
Trafalgar-square, and is the last house on the north side
of the Strand, approaching the west. Our researches
through the Strand having terminated, a bird's-eye view
of the interesting localities, into which we now emerge,
must be reserved for another chapter..

The site now occupied by Trafalgar-square, and the
National Gallery, was formerly covered by a number of
buildings, called the King's Mews, the word being fre-
quently spelt Meuse. Gay thus alludes to the features of
the neighbourhood, in his time—

"Where branching streets from Charing Cross divide;
His treble voice resounds along the Meuse,
And Whitehall echoes—clean your Honor's shoes."

So early as the reign of Edward I. the king's falcons were
kept here. The royal stables at Bloomsbury being, con-
sumed by fire, in the time of Henry VIII., the mews was
converted into stables for the royal steeds. In 1732,