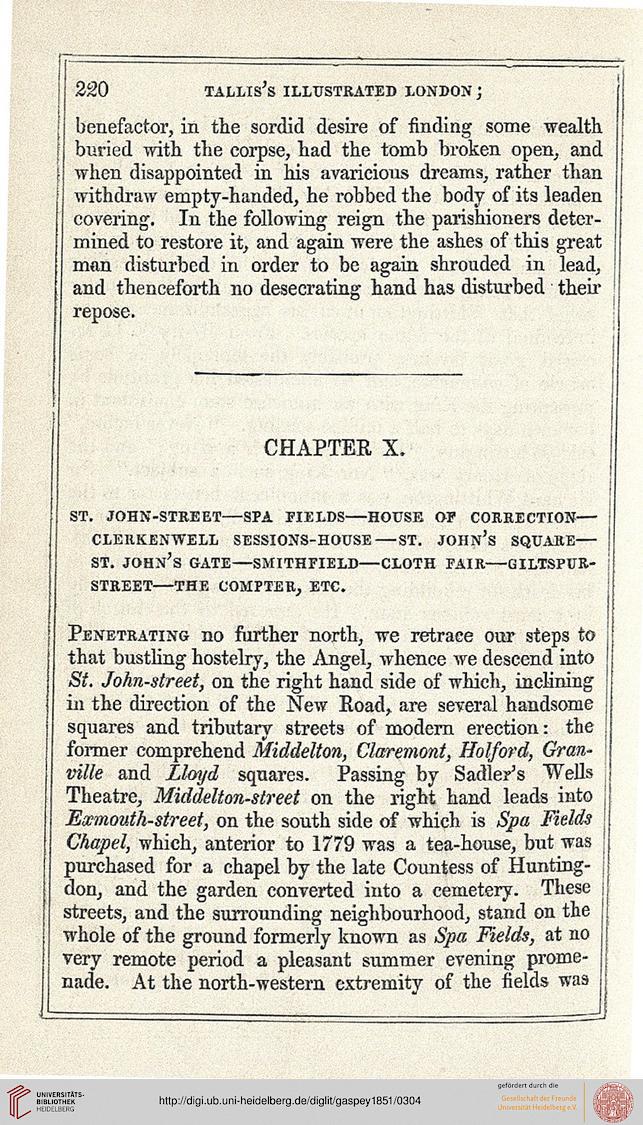 benefactor, in the sordid desire of finding some wealth,
buried with the corpse, had the tomb broken open, and
when disappointed in his avaricious dreams, rather than
withdraw empty-handed, he robbed the body of its leaden
covering. In the following reign the parishioners deter-
mined to restore it, and again were the ashes of this great
man disturbed in order to be again shrouded in lead,
and thenceforth no desecrating hand has disturbed their
repose.

Penetrating no further north, we retrace our steps to
that bustling hostelry, the Angel, whence we descend into
St. John-street, on the right hand side of which, inclining
in the direction of the New Road, are several handsome
squares and tributary streets of modern erection: the
former comprehend Middelton, Claremont, ffolford, Gran-
ville and Zloyd squares. Passing by Sadler's "Wells
Theatre, Middelton-slreet on the right hand leads into
Bxmouth-street, on the south side of which is Spa Fields
Chapel, which, anterior to 1779 was a tea-house, but was
purchased for a chapel by the late Countess of Hunting-
don, and the garden converted into a cemetery. These
streets, and the surrounding neighbourhood, stand on the
whole of the ground formerly known as Spa Fields, at no
very remote period a pleasant summer evening prome-
nade. At the north-western extremity of the fields was