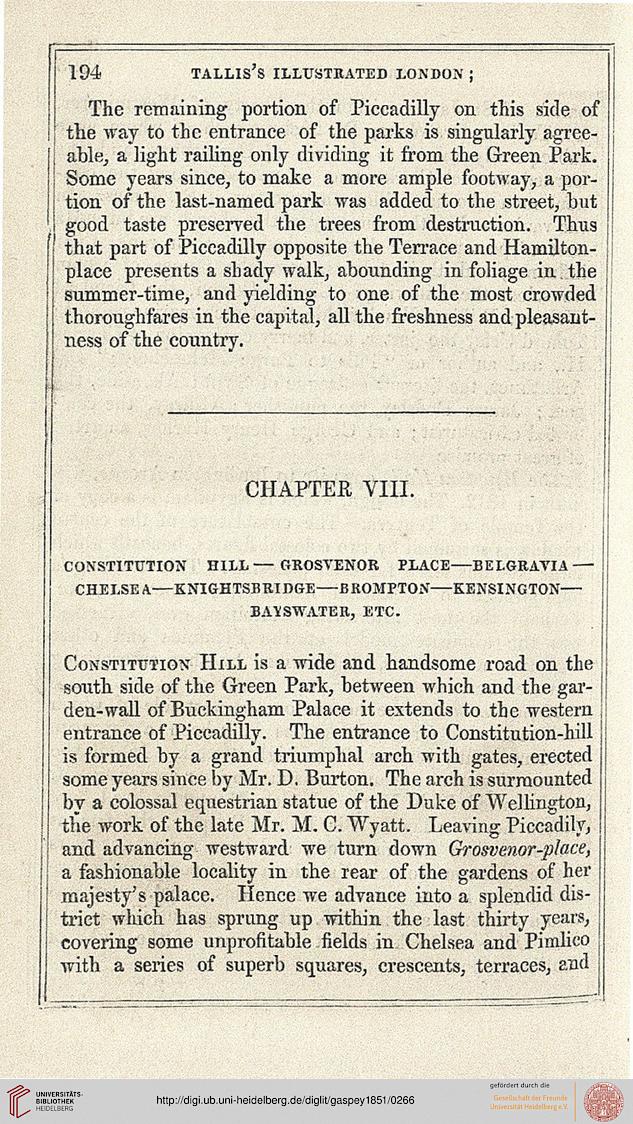 The remaining portion of Piccadilly on this side of
the way to the entrance of the parks is singularly agree-
able, a light railing only dividing it from the Green Park.
Some years since, to make a more ample footway, a por-
tion of the last-named park was added to the street, but
good taste preserved the trees from destruction. Thus
that part of Piccadilly opposite the Terrace and Hamilton-
place presents a shady walk, abounding in foliage in the
summer-time, and yielding to one of the most crowded
thoroughfares in the capital, all'the freshness and pleasant-
ness of the country.

Constitution' Hill is a wide and handsome road on the
south side of the Green Park, between which and the gar-
den-wall of Buckingham Palace it extends to the western
entrance of Piccadilly. The entrance to Constitution-hill
is formed by a grand triumphal arch with gates, erected
some years since by Mr. D. Burton. The arch is surmounted
by a colossal equestrian statue of the Duke of Wellington,
the work of the late Mr. M. C. "Wyatt. Leaving Piccadily,
and advancing westward we turn down Grosvenor-place,
a fashionable locality in the rear of the gardens of her
majesty's palace. Hence we advance into a splendid dis-
trict winch has sprung up within the last thirty years,
covering some unprofitable fields in Chelsea and Pimlico
with a series of superb squares, crescents, terraces, and