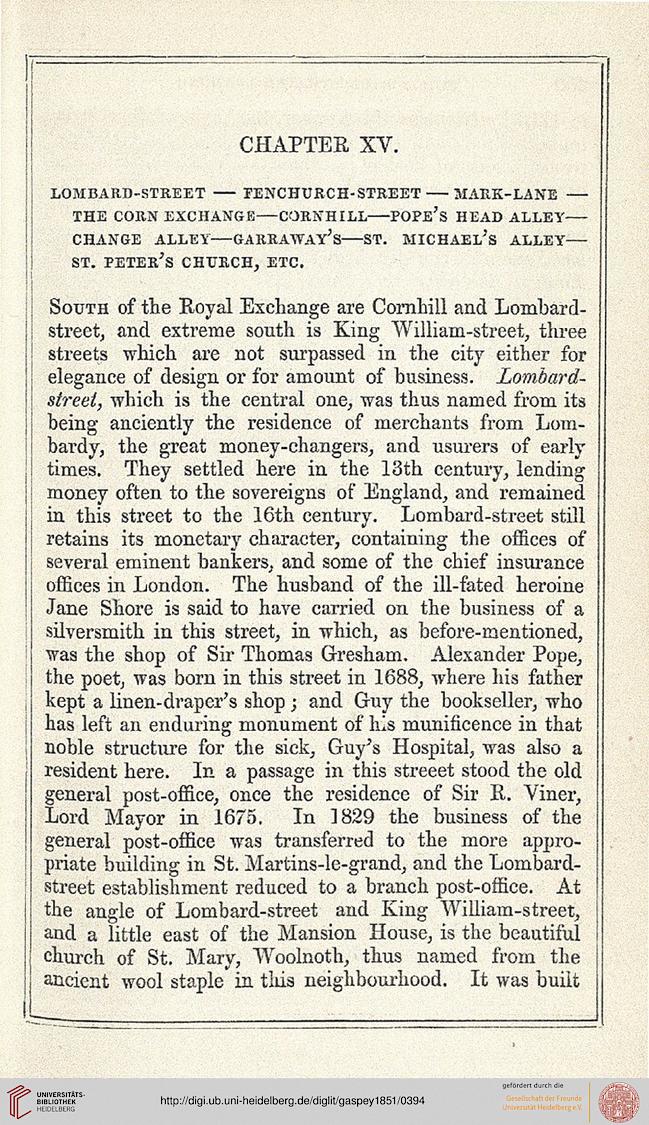 South of the Royal Exchange are Cornhill and Lombard-
street, and extreme south is King William-street, three
streets which are not surpassed in the city either for
elegance of design or for amount of business. Lombard-
street, which is the central one, was thus named from its
being anciently the residence of merchants from Lom-
hardy, the great money-changers, and usurers of early
times. They settled here in the 13th century, lending
money often to the sovereigns of England, and remained
in this street to the 16th century. Lombard-street still
retains its monetary character containing the offices of
several eminent bankers, and some of the chief insurance
offices in London. The husband of the ill-fated heroine
Jane Shore is said to have carried on the business of a
silversmith in this street, in which, as before-mentioned,
was the shop of Sir Thomas Gresham. Alexander Pope,
the poet, was born in this street in 1688, where his father
kept a linen-draper's shop; and Guy the bookseller, who
has left an enduring monument of his munificence in that
noble structure for the sick, Guy's Hospital, was also a
resident here. In a passage in this streeet stood the old
general post-office, once the residence of Sir R. Yiner,
Lord Mayor in 1675. In 1829 the business of the
general post-office was transferred to the more appro-
priate building in St. Martins-le-grand, and the Lombard-
street establishment reduced to a branch post-office. At
the angle of Lombard-street and King William-street,
and a little east of the Mansion House, is the beautiful
church of St. Mary, Woolnoth, thus named from the
ancient wool staple in this neighbourhood. It was built