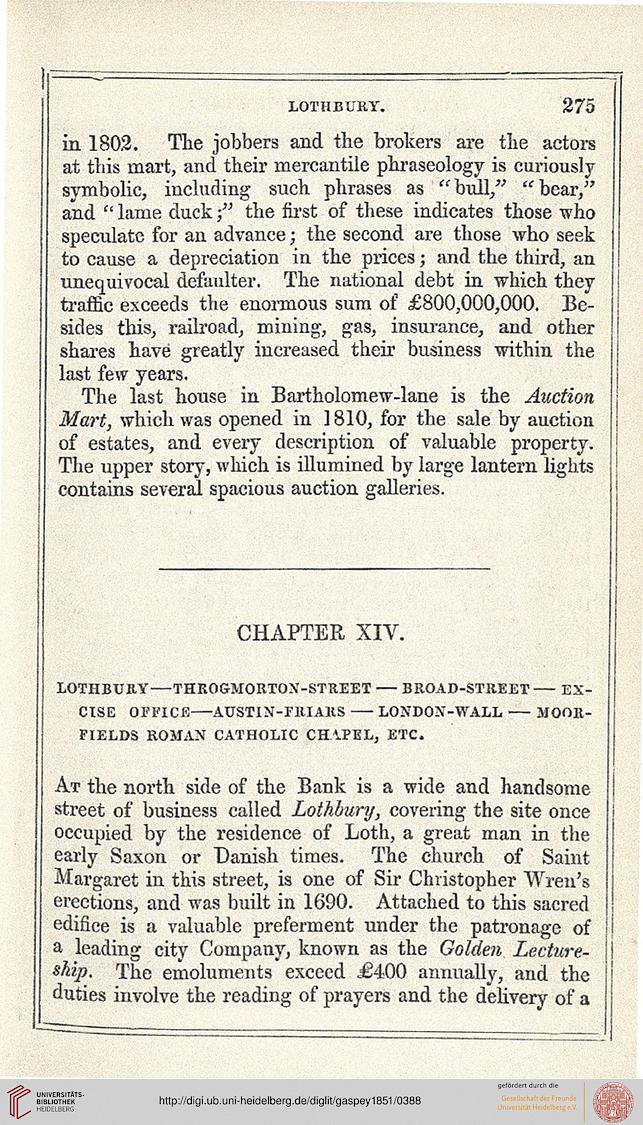 in 1802. The jobbers and the brokers are the actors
at this mart, and their mercantile phraseology is curiously
symbolic, including such phrases as "bull,'" "bear,"
and "lame duckj" the first of these indicates those who
speculate for an advance; the second are those who seek
to cause a depreciation in the prices; and the third, an
unequivocal defaulter. The national debt in which they
traffic exceeds the enormous sum of £800,000,000. Be-
sides this, railroad, mining-, gas, insurance, and other
shares have greatly increased their business within the
last few years.

The last house in Bartholomew-lane is the Auction
Mart, which was opened in 1810, for the sale by auction
of estates, and every description of valuable property.
The upper story, which is illumined by large lantern lights
contains several spacious auction galleries.

At the north side of the Bank is a wide and handsome
street of business called Lothbury, covering the site once
occupied by the residence of Loth, a great man in the
early Saxon or Danish times. The church of Saint
Margaret in this street, is one of Sir Christopher Wren's
erections, and was built in 1690. Attached to this sacred
edifice is a valuable preferment under the patronage of
a leading city Company, known as the Golden Lecture-
ship, The emoluments exceed i?400 annually, and the
duties involve the reading of prayers and the delivery of a